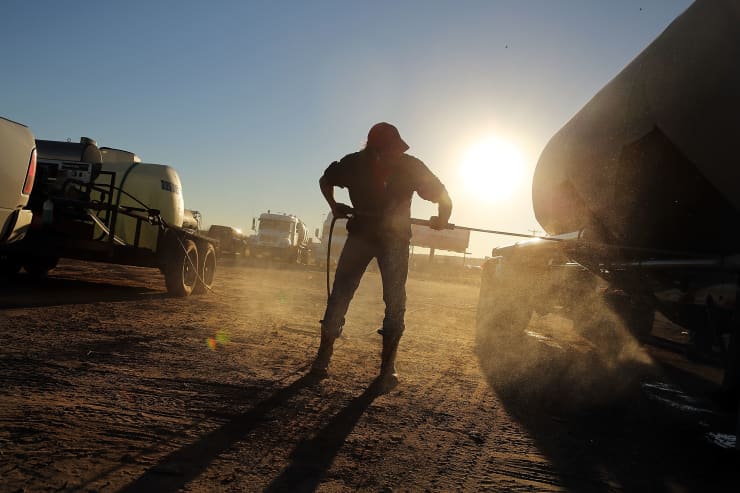 A truck used to carry sand for fracking is washed in a truck stop in Odessa, Texas.
Getty Images
Oil prices on Friday as involuntary supply cuts from Venezuela and Iran plus conflict in Libya supported perceptions of a tightening crude market, while upbeat Chinese economic data eased concerns about waning crude demand.
The oil market also followed global stock markets higher after positive corporate earnings results from JP Morgan. The dollar index slipped to its lowest against the euro in more than two weeks, making crude cheaper for non-U.S. buyers.
“Equities are getting off to a good start with earnings season and the dollar index being weaker helps reaffirm confidence in the oil market,” said Phil Streible, senior commodities strategist at RJO Futures in Chicago.
U.S. West Texas Intermediate crude futures settled 31 cents higher at $63.89 per barrel on Friday, rising half a percent on the day and posting a 1.3% weekly gain. That marked the sixth straight week of gains for WTI. 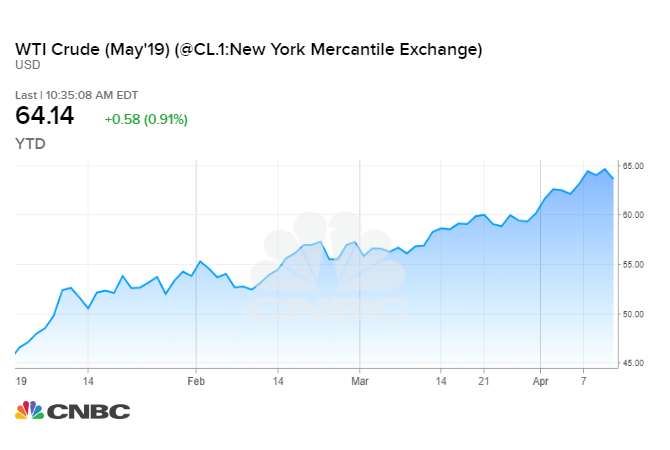 Brent crude oil futures rose 72 cents, or 1% to $71.55 per barrel, ending the week 1.7% higher, their third weekly gain in a row.
Oil markets have been lifted by more than a third this year by supply cuts led by OPEC, U.S. sanctions on oil exporters Iran and Venezuela, plus escalating conflict in fellow OPEC member Libya.
“Geopolitically infused rallies could shoot prices toward or even past the $80 per barrel mark for intermittent periods this summer,” RBC Capital Markets said in a note.
The head of Libya’s National Oil Corporation warned on Friday that renewed fighting could wipe out crude production in the country.
“We see Brent and WTI prices averaging $75 per barrel and $67 per barrel respectively through the rest of this year, but risk is asymmetrically skewed to the upside,” RBC Capital Markets said in a research note.
OPEC and its allies meet in June to decide whether to continue withholding supply. Though OPEC’s de facto leader, Saudi Arabia, is considered keen to keep cutting, sources within the group said it could raise output from July if disruptions continue elsewhere.
The producer group’s supply cuts have been aimed largely at offsetting record crude production out of the United States. U.S. drillers added 2 rigs in the latest week, bringing the national count to 833 rigs, oilfield services firm Baker Hughes reported on Friday.
On the demand side, Chinese data showed exports rebounded last month, driving U.S. and euro zone bond yields to three-week highs and helping offset weaker imports and reports of another cut in German growth forecasts.
“While macro fears of an economic hard landing may be overblown, the concentration risk of global oil demand (in Asia) remains underappreciated,” RBC Capital Markets said.
The energy sector saw the largest oil deal in years on Friday as Chevron announced it would buy Anadarko Petroleum in a deal valued at $33 billion.
WATCH: CNBC’s full interview with Chevron CEO Michael Wirth on the Anadarko Petroleum acquisition
— CNBC’s Tom DiChristopher contributed to this story.