Flames emerge from a pipeline at the oil fields in Basra, southeast of Baghdad, Iraq, October 14, 2016.
Essam Al-Sudani | Reuters
Oil prices hit nearly six month highs on Tuesday, continuing to rally after U.S. President Donald Trump surprised the market with strict new measures aimed at driving Iran’s crude exports to zero.
The Trump administration announced on Monday that it will not extend sanctions waivers to a handful of countries that import Iranian oil. The decision means any entity caught purchasing Iran’s barrels after May 1 risks triggering U.S. sanctions, which are designed to deprive the Iranian leadership of oil revenue.
U.S. West Texas Intermediate crude rose 73 cents, or 1.1%, to $66.28 a barrel around 1:45 p.m. ET (1745 GMT). WTI earlier hit $66.60, its highest level since Oct. 31.
Brent crude futures were up 38 cents, or half a percent, at $74.42 per barrel. The international benchmark for oil prices earlier rose to $74.73, a high going back to Nov. 1. 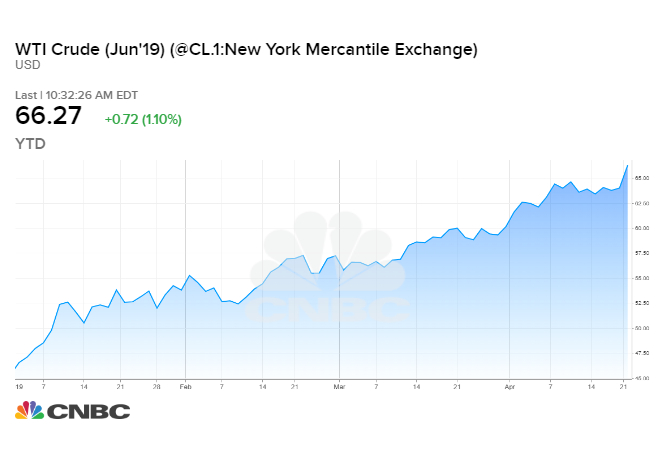 Brent surged 3 percent and WTI popped 2.7 percent during the previous session, driven by the change in U.S. policy towards Iran.
“The decision to completely eliminate waivers was a surprise, as the market expectation was for a more gradual reduction,” Credit Suisse said in a research note.
The administration issued waivers to eight countries when it restored sanctions on Iran’s energy industry in November, allowing them to purchase limited quantities of Iranian crude. Five of the countries — China, India, Turkey, South Korea and Japan — took advantage of the exemptions.
The waivers allowed 1.4 million barrels per day of Iranian crude to flow to the market, down from about 2.5 million bpd last year. The new U.S. policy threatens to wipe out much of that supply at a time when the oil market is already tightening, though analysts expect some countries to defy Trump’s ultimatum.
Credit Suisse thinks Iran’s exports will not fall to zero, but could drop by another 600,000 bpd. The investment bank estimates the global oil market is already undersupplied by about 300,000 barrels per day.
The Trump administration says Saudi Arabia, the United Arab Emirates and other allies have agreed to fill any gap left by the loss of Iranian exports.
Saudi Arabia will “coordinate with fellow oil producers to ensure adequate supplies are available to consumers while ensuring the global oil market does not go out of balance,” said Khalid al-Falih, the kingdom’s influential energy minister.
OPEC and Russia, together with several other nations, are currently trying to keep 1.2 million bpd off the market.
Several of those countries are pumping below their production quotas and will likely start lifting output as soon as next month, says UBS. However, the Swiss investment bank warns that major oil producers are unlikely to immediately open the taps.
OPEC and Russia hiked output last year after Trump announced he would restore sanctions on Iran. The flood of oil hit the market just as Trump issued the Iran sanctions waivers, contributing to a collapse in oil prices.
“Considering the experience of last year, we expect Saudi Arabia and its allies to cautiously react to customers need rather than preemptively ramp up production,” UBS said in a research note.
Analysts warn that every barrel pumped to offset falling Iranian exports is a barrel that producers cannot tap when an unplanned outage hits the oil market. With less spare capacity, the oil market will be vulnerable to supply shocks and prices spikes.
UBS expects the market to continue to tighten as seasonal oil demand ramps up, keeping Brent crude in a range between $70 and $80 a barrels this quarter.