Oil prices tumbled as much as 4% on Friday, extending early losses after President Donald Trump said he told OPEC to take action to temper fuel costs.
“The gasoline prices are coming down. I called up OPEC. I said, ‘You’ve got to bring them down. You’ve got to bring them down,’ and gasoline’s coming down,” Trump told reporters en route to a National Rifle Association event in Indianapolis.
In fact, the national average for a gallon of regular gasoline is $2.883 per gallon, up from $2.877 a day ago and $2.839 a week ago, according to AAA. Wholesale U.S. gasoline prices have ticked lower in recent days, but are still up about 10% from a week ago and nearly 7% from a month ago.
Brent crude futures were down $2.72, or 3.7%, at $71.63 per barrel around 12:30 p.m. ET (1630 GMT), after hitting a one-week low at $71.31. Brent was down about half a percent for the week, threatening to fall short of a fifth weekly price gain, which would be the longest stretch in a year.
U.S. West Texas Intermediate crude futures fell $2.57, or 3.9%, to $62.64 per barrel and were down about 2% for the week. WTI had been on track for its eighth successive weekly gain, the longest weekly run since the first half of 2015. 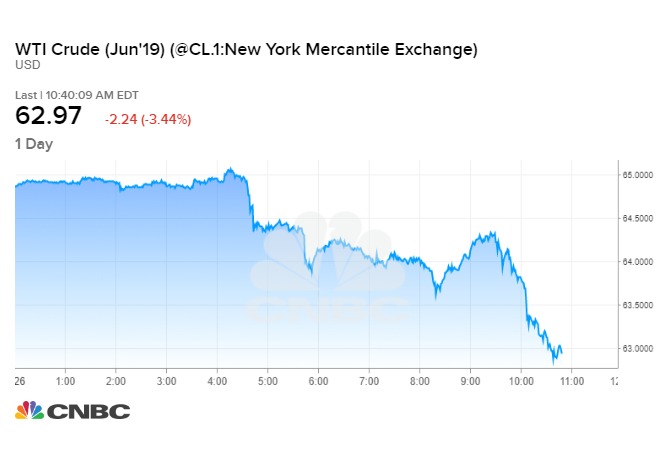 Earlier this week, the administration said it will not extend waivers that allow several countries to continue buying Iranian crude despite U.S. sanctions on the Islamic Republic. Oil prices surged more than 3% in the two days following the announcement.
The administration said it has secured commitments from Saudi Arabia, UAE and other allies to fill any gap left by the anticipated drop in Iranian supplies.
However, the influential Saudi Energy Minister Khalid al-Falih said earlier this week that there is no need to immediately start pumping more oil, and the kingdom will hike output only after customers ask for more supplies.
Prices fell earlier on expectations that some OPEC members will raise output to counter shrinking exports from Iran.
“The end of the U.S. waivers on Iran exports will be offset by higher core-OPEC and Russia and as a result we do not expect further price upside, even if volatility is likely to increase in coming months,” U.S. bank Goldman Sachs said.
Despite U.S. efforts to drive Iranian oil exports down to zero, many analysts expect some oil to still seep out of the country.
Energy consultancy FGE said “400,000 to 500,000 barrels per day of crude and condensate will continue to be exported,” down from around 1 million bpd currently.
Jefferies bank saw 500,000 to 600,000 bpd, adding “at least China and potentially India and Turkey will continue to import Iranian crude.”
China, the world’s biggest buyer of Iranian oil, has formally complained to the United States.
Meanwhile OPEC member Iraq said it could raise its output. Also providing a cap on prices, U.S. crude inventories last week rose to their highest since October 2017.
Oil markets have tightened amid an OPEC output cut deal, sanctions on Venezuela and Iran and unsteady production in Libya.
The drop followed Brent’s rise above $75 per barrel for the first time this year on Thursday after Germany, Poland and Slovakia suspended imports of Russian oil via a major pipeline, citing poor quality.
The move cut parts of Europe off from a major supply route. Russia has said it planned to start supplying clean oil via a pipeline on April 29.
— Reuters contributed to this story.+