Oil prices surged about 3% at midday on Monday, hitting fresh 2019 highs, after the Trump administration announced that all oil buyers will have to end imports from Iran in just over a week or be subject to U.S. sanctions.
The administration said the State Department will cease granting sanctions waivers to any country still importing Iranian crude or condensate, an ultra-light form of crude oil, after May 2.
Brent crude futures shot up more than 3% to $74.52 per barrel around midday, sailing past last week’s 2019 high at $72.27 and hitting the highest level since Nov. 1, 2018. Brent, the international benchmark for oil prices, was last up $2.26, or 3.1%, at $74.23 per barrel.
U.S. West Texas Intermediate crude futures rose $1.75, or 2.7%, to $65.75 per barrel, after earlier hitting $65.92, the highest level since Oct. 31, 2018. WTI had been trading sideways after hitting a five-month high at $64.79 nearly two weeks ago. 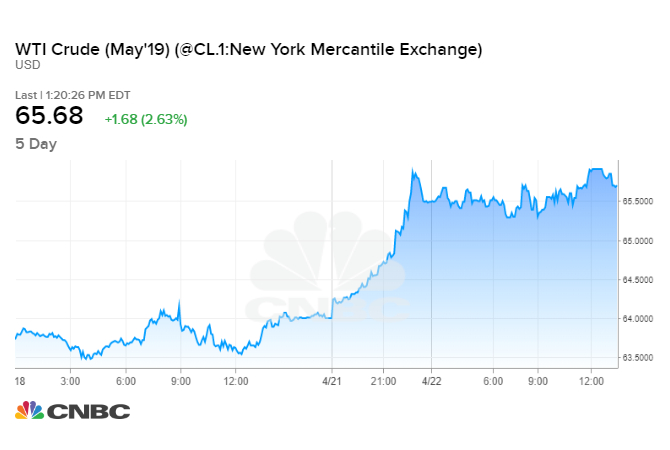 Crude futures first hit new 2019 highs following report by the Washington Post on the Trump administration’s new policy.
The surprise move is driving the breakout in oil prices, said Michael Bradley, equity strategist at investment bank Tudor Pickering Holt.
“Crude markets were taken by surprise today as the Trump administration indicated it WON’T renew waivers that lets countries purchase Iranian oil without facing U.S. sanctions,” he said in a research note. “Many expected that the US would take tougher action on the waiver front, but most DIDN’T expect an announcement of zero waivers.”
The U.S. reimposed sanctions in November on exports of Iranian oil after U.S. President Donald Trump unilaterally pulled out of a nuclear accord struck in 2015 between Iran and world powers. Washington, however, granted eight of Iran’s biggest oil buyers exemptions that allowed them limited purchases for an additional six months.
The eight buyers are China and India — Iran’s biggest customers — as well as Japan, South Korea, Turkey, Italy, Greece, and Taiwan. The waivers have allowed Iran to continue exporting about 1 million barrels per day, down from roughly 2.5 million bpd last year.
The decision to end the waivers comes as oversupply is rapidly draining from the oil market following several months of production cuts led by Saudi Arabia. The top oil exporter is spearheading an effort by OPEC and other producers, including Russia, to keep 1.2 million barrels per day off the market.
“The market reaction you’re seeing right now is because we are in a tight situation supply-wise because of the efforts of Saudi Arabia over the past several months,” John Kilduff, founding partner at energy hedge fund Again Capital, told CNBC’s “Squawk Box” on Monday.
Brent prices have risen by 38% and U.S. crude is up nearly 45% this year following a collapse in the cost of crude in the final months of 2018.
In a statement, the White House said the U.S. will work with OPEC members Saudi Arabia and the United Arab Emirates “to take timely action to assure that global demand is met as all Iranian oil is removed from the market.”
Saudi Energy Minister Khalid al-Falih said the kingdom will “coordinate with fellow oil producers to ensure adequate supplies are available to consumers while ensuring the global oil market does not go out of balance.”
“In the next few weeks, the Kingdom will be consulting closely with other producing countries and key oil consuming nations to ensure a well-balanced and stable oil market, for the benefits of producers and consumers as well as the stability of the world economy,” Falih said in a statement.
OPEC and its allies are scheduled to meet at the end of June to decide whether to lift the production caps or continue suppressing output.
A spokesperson for China’s Foreign Ministry and Turkey’s minister of foreign affairs denounced the U.S. policy towards Iran following the announcement.
Of the buyers of Iranian oil, India could suffer the most from Washington’s move, said Daryl Liew, head of portfolio management at financial services company Reyl Singapore.
“I think India is probably one of the key potential countries that might suffer from a higher oil price, in terms of their current account deficit, for example. And that’s going to be basically putting pressures on inflationary pressures as well,” Liew said, speaking on CNBC’s “Street Signs” on Monday.
Meanwhile, major OPEC oil producer Libya’s capital Tripoli was hit by a series of airstrikes and explosions over the weekend, in escalating violence that could threaten oil supply further.
The country has been torn by conflict since the fall of dictator Muammar Gaddafi in 2011. Libya is on the cusp of full-scale civil war after an eastern military leader ordered his forces into Tripoli, the seat of a rival, United Nations-recognized government.
The situation in Libya could lead to a rapid drop in oil production, said Kang Wu, head of analytics for Asia at S&P Global Platts.
“Libya is producing 1.1 million barrels per day. If things go wrong, immediately somewhere around 300,000 to 400,000 barrels per day of oil may be affected,” he said.
“A lot depends on how Saudi Arabia will react to the situation — they have surplus capacity — but supply concerns will keep pressure on oil prices in the short term,” Wu added.
— Reuters contributed to this report.