A worker walks through an oil production facility owned by Parsley Energy in the Permian Basin near Midland, Texas, August 23, 2018.
Nick Oxford | Reuters
Oil prices rose on Friday amid the ongoing OPEC-led supply cuts and U.S. sanctions against Iran and Venezuela, putting crude markets on track for their biggest quarterly rise since 2009.
The rebound comes after a swift and punishing collapse in oil prices during the final quarter of 2018.
U.S. West Texas Intermediate crude futures were up 79 cents, or 1.3 percent, at $60.09 per barrel around 12:40 p.m. ET (1640 GMT). WTI earlier touched $60.73, its highest level since Nov. 12.
WTI futures were set to rise for a fourth straight week and were on track to rise 32 percent in the first three months of the year. 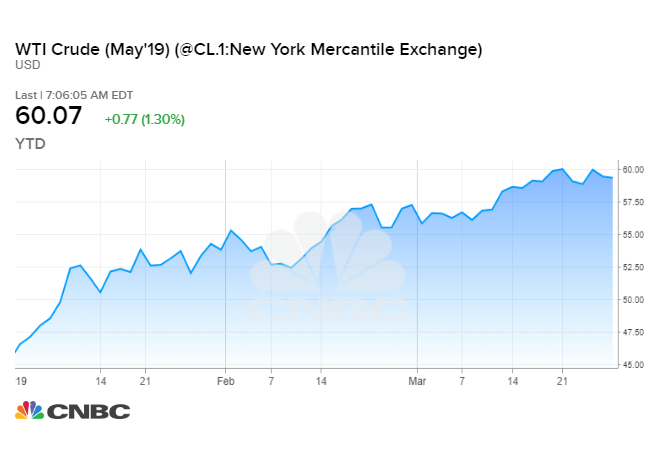 International benchmark Brent crude futures rose 57 cents to $68.39 per barrel, after hitting a 2019 high at $68.89. Brent futures were set to rise 2 percent for the week and by 27 percent in the first quarter.
For both futures contracts, the first quarter 2019 is the best performing quarter since the second quarter of 2009 when both gained about 40 percent.
Oil prices have been supported for much of 2019 by the efforts of OPEC and non-affiliated allies like Russia, together known as OPEC+. The alliance has pledged to withhold around 1.2 million barrels per day of supply this year to prop up markets.
“Production cuts from the OPEC+ group of producers have been the main reason for the dramatic recovery since the 38 percent price slump seen during the final quarter of last year,” said Ole Hansen, head of commodity strategy at Saxo Bank.
Britain’s Barclays bank said on Friday oil prices “are likely to move still higher in Q2 and average $73 per barrel ($65 WTI), and $70 for the year.”
OPEC+ are meeting in June to discuss whether to continue withholding supply or not.
OPEC’s de-facto leader Saudi Arabia favors cuts for the full year while Russia, which only reluctantly joined the agreement, is seen to be less keen to keep holding back supply beyond September.
However, the OPEC+ cuts are not the only reason for rising oil prices this year, with analysts also pointing to U.S. sanctions on oil exporters and OPEC members Iran and Venezuela as reasons for the surge.
Despite the surging prices, analysts are expressing concerns about future oil demand amid worrying signs the global economy may move into a recession.
“The biggest short-term risk to the oil market is likely to be driven by renewed stock market weakness,” said Saxo Bank’s Hansen.
Stock markets have been volatile this year amid signs of a sharp global economic slowdown.
“Business confidence has weakened in recent months ... (and) global manufacturing PMIs are about to move into contraction,” Bank of America Merrill Lynch said in a note, although it added that “the services sector ... continues to expand unabated.”
Given the OPEC+ cuts, however, Bank of America said it expected oil prices to rise in the short-term, with Brent prices forecast to average $74 per barrel in the second quarter.
Heading towards 2020, however, the bank warned of a recession.
— CNBC’s Tom DiChristopher contributed to this report.