Oil hit a two-month high near $64 a barrel as OPEC-led supply cuts and U.S. sanctions against Venezuela's oil exports brightened the supply outlook, but prices fell back on uncertainty about prospects for the global economy.
Brent crude oil, the global benchmark, hit $63.63 a barrel, the highest since Dec. 7, before turning negative. Brent slipped 82 cents, or 1.3 percent, to $61.93 around 10:50 a.m. ET (1550 GMT).
U.S. West Texas Intermediate crude hit a 2019 high of $55.75, its best intraday price since Nov. 21. WTI was last down $1.36, or 2.5 percent, at $53.90.
The slump appears to be tied to U.S. dollar strength, which makes oil more expensive to holders of other currencies, and pipeline movements that suggest a potentially big increase in crude stockpiles at the Cushing, Oklahoma delivery hub, where WTI is priced, said Edward Morse, global head of commodities research at Citigroup.
"I think that's why we've seen most of the WTI sell-off, and the sell-off in WTI has dragged down Brent, not quite as much as WTI," he told CNBC's "Squawk on the Street." 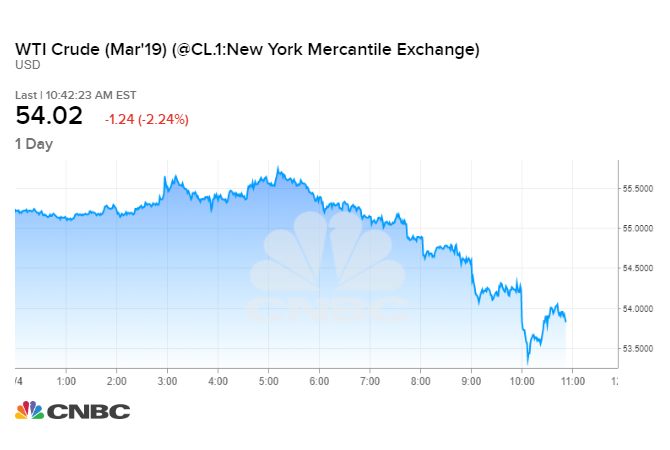 OPEC and its allies began a new round of supply cuts in January. These curbs, led by Saudi Arabia, have been compounded by involuntary losses that the Venezuelan sanctions could deepen.
"You have the sanctions on Venezuela, on top of the reduced supply from Saudi Arabia," said Olivier Jakob, oil analyst at Petromatrix. "There's no sign of overhang in the crude oil markets."
OPEC supply fell in January by the largest amount in two years, a Reuters survey last week found. That offset limited compliance with the output-cutting deal so far by non-OPEC Russia.
The U.S. sanctions on Venezuela will limit oil transactions between Venezuela and other countries and are similar to those imposed on Iran last year, some analysts said after examining details announced by the government.
Underlining the lack of excess supply, Jakob cited a rapidly clearing West African crude market and the structure of Brent crude futures, in which the first-month contract is trading near the price of the second month.
While OPEC and its allies are cutting output, the United States is expanding supply. Nonetheless, figures on Friday showed a drop in the number of U.S. oil rigs to their lowest in eight months, lending prices some support.

"This points to a less pronounced rise in U.S. oil production," said Carsten Fritsch, analyst at Commerzbank. "The oil market is more or less balanced," he added, citing the drop in OPEC output to a level close to forecast demand for the group's crude.
The main drag on prices has been concern about a possible slowdown in demand this year due to a weaker outlook for economic growth and developments such as the U.S.-China trade dispute.
U.S. President Donald Trump last week said he would meet his Chinese counterpart Xi Jinping in the coming weeks to try to settle the dispute, and there are hopes that the two sides will come to an agreement.
"Oil prices have lacked direction in today's trading session because of mixed market cues," said Abhishek Kumar, senior energy analyst at Interfax Energy in London.
"Insufficient progress made in the US-China trade talks is weighing on prices, although losses are limited by implementation of the OPEC+ deal and concerns surrounding Venezuela's oil supplies."
WATCH: Here's what drives the price of oil