President Trump and the GOP in 2018 decided to make then-House minority leader Rep. Nancy Pelosi (D-Calif.) the face of the Democratic Party. It played to their anti-elite, anti-urban and, yes, anti-woman message directed at their base. She and Democrats triumphed in the midterms, and now Republicans might be a tad envious of a party leader whose party isn’t afraid to let out in polite company.
The latest Quinnipiac poll shows, “American voters trust House Speaker Nancy Pelosi more than President Donald Trump, 49 - 42 percent ‘on issues that are important to you.’ . . . Independent voters trust Pelosi more than President Trump 49 - 36 percent.” There is a substantial gender gap, with men preferring Trump by a small margin, and women preferring Pelosi 54-37 percent. Trump has over 80 percent backing from his party; Pelosi has over 90 percent.
Judging from this and the president’s nose-dive during the shutdown, he might want to avoid tangling with Pelosi, at least in the short term. There really is no good news here for Republicans:

As in prior polling, Trump rates horribly on some issues (37-58 percent on foreign policy and 38-59 percent on immigration), while he’s now slightly underwater on the economy. Trying to shut down the government again, or use emergency powers to get wall money, would almost certainly be a political disaster. Americans oppose a wall (55-41 percent), don’t think it will significantly reduce crime (64-33 percent) or drugs (60-37 percent), and would not significantly decrease the amount of illegal drugs in the U.S., voters say, 60-37 percent. Voters by a large margin (61-33 percent ) favor border security with no wall, and by an even greater margin oppose his use of executive, so-called “emergency” powers (66-31 percent). Finally, “American voters also oppose 68 - 26 percent shutting down the government to get funding for a wall. Shutting down the government for leverage in policy disagreements is ‘inappropriate,’ voters say 79 - 16 percent.”
It’s hard to see how Trump could be more out of touch with voters — or how Democrats, for now, could be better positioned. Going up against Trump has done wonders for the Democrats and for Pelosi personally, but there are several concerns Democrats would do well to address. First, Democrats need to pivot from opposing the wall to supporting smart, serious border security measures. Since no one in Congress these days seems to care much about spending, they shouldn’t be afraid of spending some real money. Second, they have leverage now to do something useful about the real, current problem: migrants. They should push for more immigration judges to reduce the backlog, and more aid and assistance to the countries from which migrants are fleeing.
Finally, protection for the Deferred Action for Childhood Arrivals is a winning issue for Democrats. They might try to throw it into this negotiation, but they shouldn’t let Republicans paint them as holding up border protection for “dreamers.” They will score points by passing and sending over to the Senate a realistic and humane bill to legalize dreamers and to protect those on temporary protected status. Let Republicans be the ogres — again.
Watch:
Read more:
David Byler: Want to know which Democrats can actually beat Trump? We don’t have to guess.
Jennifer Rubin: Here’s what should worry Republicans
Harry Litman: Is Mueller’s report really ‘close to being completed’? I doubt it.
David Byler: Don’t overthink this. Trump lost the shutdown.
Jennifer Rubin: Harris’s town hall: The promise and the perils
We are a participant in the Amazon Services LLC Associates Program, an affiliate advertising program designed to provide a means for us to earn fees by linking to Amazon.com and affiliated sites.

Is Gold Flirting with a seven-year high? : Gold on track for highest close in 7 years as investors hedge stock market highs and virus fears 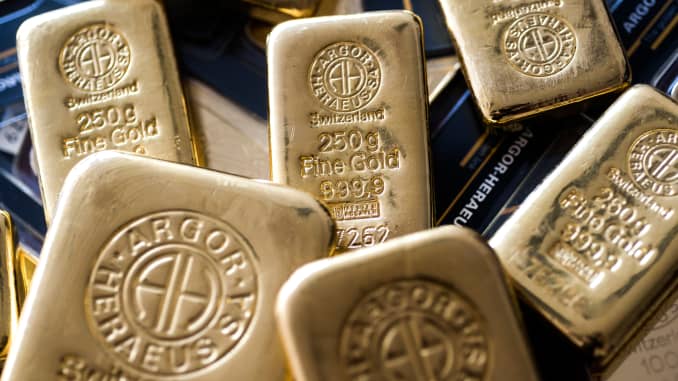