Workers position a section of pipe during drilling operations at a gas well outside Corpus Christi. Patterson-UTI Energy is drilling the well for Decker Operating of Houston.
Eddie Seal | Bloomberg | Getty Images
Oil prices hit six-week highs on Friday, rising with the stock market, on news that Beijing has put forward a plan to eliminate its trade surplus with the United States.
The plan would see China ramp up purchases of U.S. goods over the next six years with the goal of reducing its $323 billion trade surplus last year to zero by 2024. President Donald Trump has highlighted the U.S. trade deficit with foreign countries, and the offer could appeal to the protectionist commander-in-chief.
However, U.S. trade negotiators — who aim to address issues like barriers to accessing the Chinese markets and China’s alleged theft of intellectual property — are skeptical of Beijing’s offer, according to Bloomberg, which first reported the news.
Nevertheless, international Brent crude oil futures were up $1.37, or 2.2 percent, at $62.55 per barrel around 12:25 p.m. ET. Brent earlier rose as high as $63, its best intraday price since Dec. 7.
U.S. West Texas Intermediate crude futures rose $1.50, or 2.9 percent, $53.57 per barrel. WTI peaked at $53.90 on Friday, also a high going back to Dec. 7. 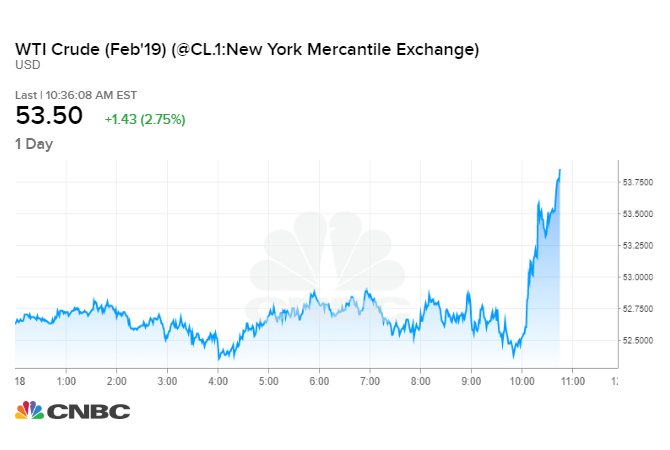 Both benchmarks are up more than 3 percent this week, putting them on pace for a third consecutive week of gains following a three-month collapse in oil prices.
Earlier on Monday, markets got a boost from a Wall Street Journal report that Washington is considering removing tariffs on Chinese goods to calm markets and advance trade talks.
However, markets gave backs gains after the U.S. Treasury Department and United States Trade Representative denied that either agency has recommended the tactic.
The ongoing trade dispute between the world’s two biggest economies has raised concerns about slower global growth and weaker demand for fuel.
“The most unknown question for the oil markets for 2019 is the level of demand, so oil interestingly is acting more like an equity market in the sense that it’s pricing in concerns about future demand,” said Tamar Essner, director of energy and utilities at Nasdaq Corporate solutions.
“People are really worried about these red flags in China in terms of auto sales coming down, retail sales coming down, and they’re looking at that and saying maybe this is a leading indicator — that demand might come down in the future,” she told CNBC’s “Worldwide Exchange” on Friday.
Oil prices also drew support from a report issued on Thursday showing OPEC’s oil output fell sharply in December, indicating the 14-nation producer group got a jump start on supply reductions that began on Jan. 1.
The decline was driven by a large voluntary reduction in Saudi output, as well as supply disruptions from Libya and Iran.
Some analysts believe U.S. sanctions on Iran’s oil exports will tighten in the coming months. Iran’s energy industry has been under U.S. sanctions since November, but the Trump administration is allowing eight countries to more gradually scale back their purchases.
Risk consultancy Eurasia Group on Thursday said Washington is likely to continue granting waivers to China, India, Japan, South Korea and Turkey, but Greece, Italy and Taiwan will likely see their exemptions expire in May.
The International Energy Agency on Friday said balancing the oil market will be a marathon rather than a sprint, as demand remains uncertain at a time when U.S. oil production is surging.
“The level of output in the world’s biggest liquids producer, the United States, will once again be a major factor in 2019,” IEA said.
“For oil demand, there is a mixed picture,” said the Paris-based adviser to developed nations, adding “Confidence is weakening in several major economies.”