Shares of Deutsche Bank slumped more than 4 percent Thursday after a report said the embattled German lender is gearing up for a potential merger with rival Commerzbank by mid-2019.
Shares in Commerzbank slipped by a similar amount.
The report, from Bloomberg citing anonymous sources, noted the deal is being brokered by the German government and would happen if efforts to restructure the bank fell short of targets.
A spokesperson for Deutsche Bank declined to comment on the report when contacted by CNBC.
While the German government has made no official statement on the potential merger, speaking to CNBC at the World Economic Forum in Davos last week, Finance Minister Peter Altmaier said he is willing to lend “political support” to Deutsche Bank in its recovery path.
“Deutsche Bank ... suffered some setbacks in the past, but it is basically sound and it can recover and so the question is what are the details of such strategy. And as we discussed with the CEO and the board and all the people concerned, I trust in Deutsche Bank and I will lend my political support to Deutsche Bank, ” he said.
When asked about reports of a potential merger between Deutsche and Commerzbank, the minister did not comment on such a possibility but said the German government has a keen interest in seeing a solid bank.
”(A merger) is something that has to be considered first of all by the banks and the companies concerned. We are a market economy and we respect the decisions that are taken by banks or companies whatsoever,” he said.
Sewing’s turnaround strategy?

Deutsche Bank is set to report its fourth-quarter results on Friday. In the third quarter of 2018, the bank reported a net income of 229 million euros ($262.71 million), above the 149 million euros expected in a Reuters poll of analysts. However, that profit figure was 65 percent below what the bank had reported a year ago.
In the past few years, the bank has made headlines for all the wrong reasons — from settlements with the U.S. Department of Justice, to management reshuffles, weak earnings, constant restructuring, merger speculation and steep stock price falls. 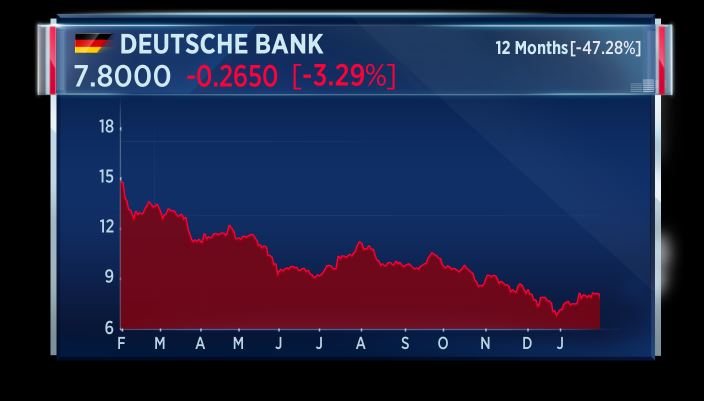 However, Christian Sewing, the bank’s current CEO, who took the helm in April 2018 after replacing John Cryan, the bank’s leader for nearly three years, has been making efforts to turn around the bank’s ailing strategy.
Speaking to German weekly publication Die Zeit on the sidelines of WEF, Sewing said he wants to make Deutsche Bank a place that lives up to his standards.
“I want to get my job right, I want to have the right values and I want to have the passion in this bank like before; we need to bring pride back to Deutsche Bank.”
But ever since Sewing took over, he’s been faced with challenges. Last week, another report in Bloomberg, citing anonymous sources, said the U.S. Federal Reserve was investigating the German lender’s role in a money laundering scandal at Danske Bank. Deutsche was quick to deny any probe, but said it had received a number of requests for information from regulators and authorities around the world. The bank has iterated that it’s yet to see any evidence of wrongdoing on its part.
Meanwhile on Thursday, the bank said it had received an inquiry from two U.S. House of Representatives committees on the lender’s ties to President Donald Trump.
Shares of Deutsche Bank are up nearly 13 percent since the start of this year. However, shares are down nearly 50 percent over a 12-month period.