Oil pumpjacks in the Permian Basin oil field are getting to work as crude oil prices gain.
Spencer Platt | Getty Images
Oil prices turned sharply lower on Thursday, though U.S. crude remained on track to break a three-month losing streak.
Crude futures have powered through a steady flow of weak economic data from China, the world's second biggest oil consumer. The energy complex has been boosted by OPEC-led production cuts aimed at draining oversupply and U.S. sanctions on Venezuela, which threaten to disrupt global trade flows and bolster prices.
U.S. West Texas Intermediate crude prices were last down 40 cents at $53.83 a barrel, after hitting a fresh two-month high at $55.37. WTI is heading for a roughly 18.5 percent gain.
Brent crude, the international benchmark for oil prices, rose 24 cents to $61.89 a barrel around 1:47 p.m. Brent is currently up about 15 percent in January, for its best monthly gain since April 2016. 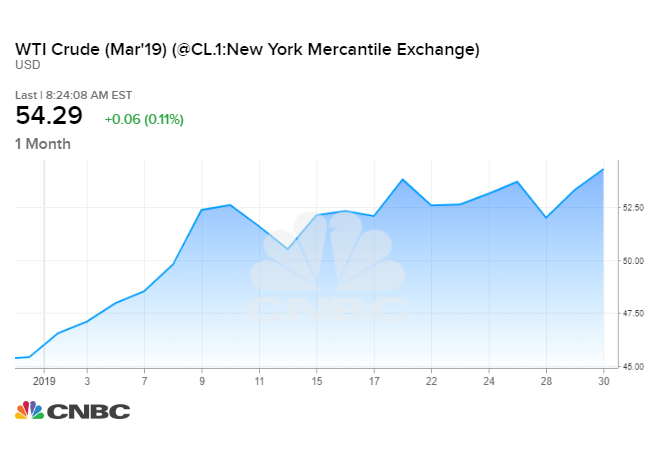 Despite the strong monthly performance, both benchmarks remain in bear market territory, with WTI down about 30 percent from its 52-week high in October. The crude price collapsed to roughly 18-month lows in the final quarter of 2018 on growing oversupply, weak demand signals and technical trading.
At the end of the January rally, the oil market is on the cusp of another leg higher, according to Craig Erlam, senior market analyst at brokerage OANDA.
"A break through $55 in WTI and $65 in Brent would be a very bullish signal for these and could be the catalyst for more significant upside, with oil having stabilised over the last few weeks following the post-Christmas bounce," Erlam wrote in a briefing.
The latest bullish catalysts came on Wednesday, when U.S. government data showed U.S. gasoline stockpiles fell by 2.2 million barrels after eight straight weeks of increases. U.S. crude inventories rose by less than 1 million barrels after a series of large builds.
Oil prices later extended gains after the Federal Reserve said it will be "patient" in raising U.S. interest rates, bolstering the stock market and pushing down the U.S. dollar. Crude is sold in dollars, so a weaker greenback makes the commodity more affordable to holders of other currencies.
Crude is also drawing support from new U.S. sanctions on Venezuela's state-owned oil firm PDVSA. The penalties announced this week are aimed at regime change.
About half of Venezuela's roughly 1 million barrels per day in exports go to U.S. refineries. The sanctions are forcing Venezuela to find new offtakers, primarily in India and China, and prompting American refiners to substitute the barrels.
The U.S. is also sanctioning Iranian oil exports, raising concerns about supplies of medium, heavy and sour crude grades used to produce products like diesel and jet fuel.
At the same time, Saudi shipments to the United States have been falling, as OPEC and 10 other nations including Russia aim to keep 1.2 million bpd off the market.
Earlier this week, Saudi Energy Minister Khalid al-Falih said the kingdom will target output at 10.1 million bpd, down from its January goal and below its quota under the so-called OPEC+ deal. Saudi Arabia is the world's top exporter and is making the deepest production cuts.
A move higher for oil may now depend on the U.S., where output is consistently hitting new records each month and now stands around 12 million bpd, said Mike Kelly, head of exploration and production research at Seaport Global.
"The accounts that we talk to say that, really, to want to get involved in oil, I have to see the world's swing producer — which is now us here in the U.S., the shale guys — they have to temper their growth a little bit," he told CNBC's Futures Now on Wednesday.
Forecasts from the Department of Energy show growth from several major shale oil regions slowing at the start of the year. January also saw the biggest reduction in rigs operating in U.S. oil fields since April 2016, according to Reuters analysis.
A shortage of pipelines needed to carry oil from the wellhead to refineries and export terminals is creating bottlenecks in the Permian Basin, the nation's top shale region. Drillers are also under pressure to generate positive cash flow and return value to shareholders.
"We can't grow at 2 million barrels a day year-over-year here in the U.S. if demand is growing at potentially half of that," Kelly said. "We are seeing this nice move now where investors are holding these oil companies' feet to the flames."
The ongoing U.S.-China trade dispute is still hanging over the market and threatens to exacerbate a slowdown in Chinese growth that could dent fuel demand. Negotiators from the two countries are meeting in Washington ahead of a March deadline to prevent higher tariffs on hundreds of billions in goods.