Email ThisBlogThis!Share to TwitterShare to FacebookShare to Pinterest
Labels: CNN

The Securities and Exchange Commission today announced the unsealing of fraud charges against a defendant who stole at least $400,000 from investors through the sale of non-existent pre-IPO shares of stock. The SEC also obtained emergency relief, including an asset freeze and a temporary restraining order to halt the offering.
The SEC's complaint alleges that Keenan Gracey sold investors purported pre-IPO shares in Perspecta, Inc., a new company that will be formed as a result of the merger of three other companies. Although the merger is planned, Gracey's claims of ownership of pre-IPO shares in Perspecta were false. As alleged in the SEC's complaint, Gracey has no interest in the not-yet-formed company and no IPO is planned for its stock. The SEC alleges that Gracey used publicly available information about the merger and false claims about his supposed connections with the companies involved to convince investors that they would recover sixty times their investment if they purchased pre-IPO shares from him.
The SEC's complaint filed under seal in federal court in U.S. District Court for the Central District of California on May 9, 2018 and unsealed today, charges Gracey with violations of Section 10(b) of the Securities and Exchange Act of 1934, and Rule 10b-5 thereunder, and Section 17(a) of the Securities Act of 1933. The Court granted the SEC's request for an asset freeze and a temporary restraining order against Gracey from further violations of the federal securities laws, as well as other emergency relief. The SEC complaint also seeks preliminary and permanent injunctions, return of any ill-gotten gains with interest, and civil penalties.
The SEC's investigation was conducted by Alec Johnson and was supervised by Marc Blau. The SEC's litigation will be led by Don Searles and supervised by Amy Longo.
The SEC encourages investors to be wary of any offer of pre-IPO shares, as further detailed in this investor alert.
Posted by Fernando Guzmán Cavero at May 17, 2018 1 comment:

Small Caps in Russell 2000 Break Out to Fresh Highs

Small-cap stocks in the Russell 2000 have outperformed the S&P 500, Dow Jones Industrial Average and technology stocks in the NASDAQ Composite over the past three months. While many larger companies have been struggling to cope with a potential trade war, small caps conduct most of their business in the United States and aren't affected by these risks. At the same time, these companies are well positioned to benefit from the lower corporate tax rate.
The iShares Russell 2000 ETF (IWM) rose more than 1% to new all-time highs following its breakout from an ascending triangle pattern on Wednesday. According to iShares, the fund's average P/E ratio clocked in at 20.91x, which is still lower than the S&P 500's 24.78x P/E ratio. Many investors may be drawn to the lower earnings multiples for these companies compared with the lofty multiples seen at larger companies in the S&P 500 and DJIA. (See also: IWM vs. VTWO: Comparing U.S. Small-Cap ETFs.) 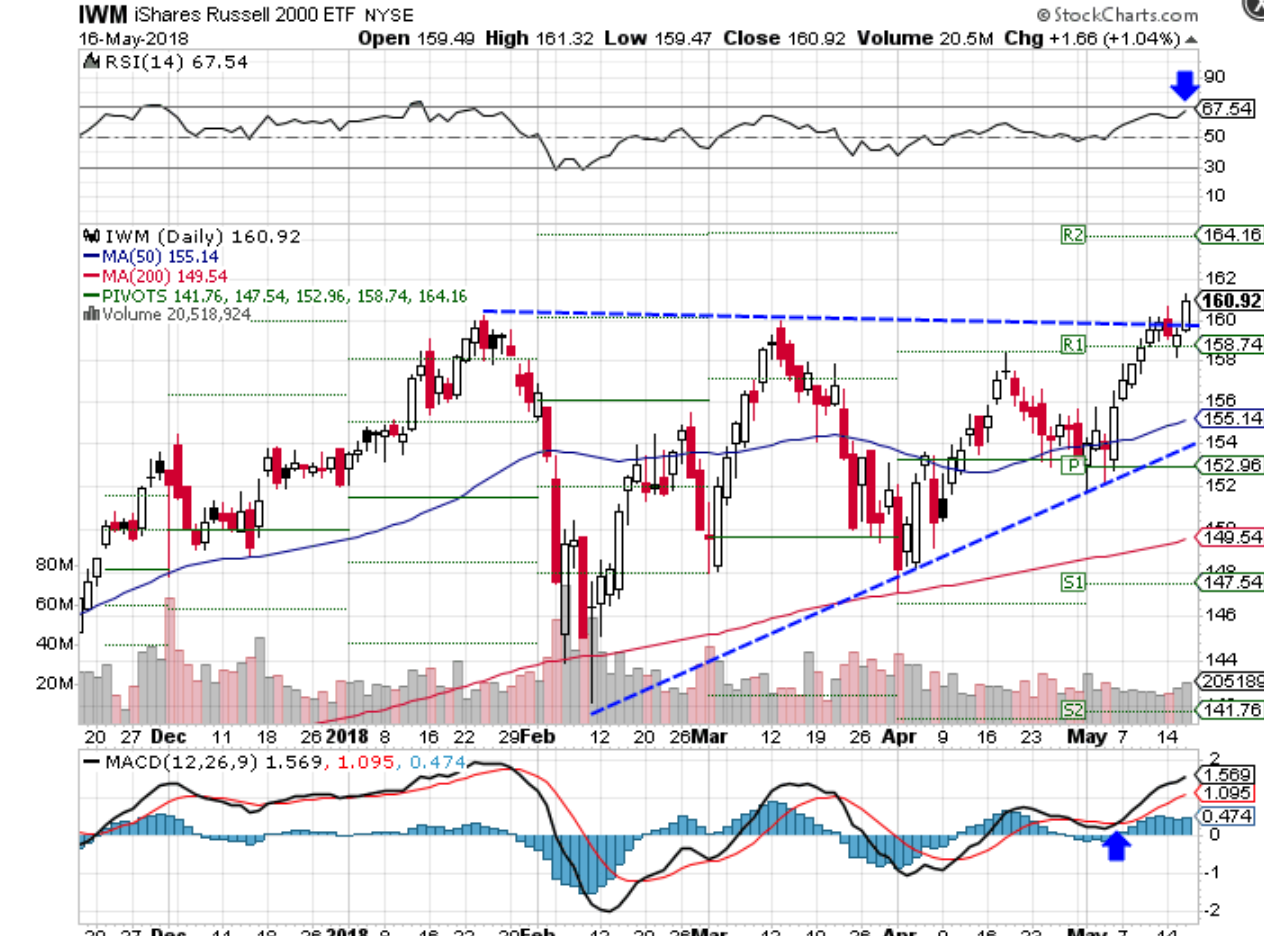 From a technical standpoint, the fund broke out from trendline resistance at around $160 to fresh all-time highs of $160.92 on Wednesday. The relative strength index (RSI) is rapidly approaching overbought levels at 67.54, but the moving average convergence divergence (MACD) remains in a robust uptrend following its bullish crossover earlier this month. These indicators suggest that there could be some profit taking, but the long-term trend is bullish.
Traders should watch for some consolidation above $160.00 and then a move toward R2 resistance at around $164.16 over the coming sessions. Based on the ascending triangle chart pattern, the fund could see a long-term move higher toward about $180.00 before meeting significant resistance. If the stock breaks below trendline support at $160.00, traders could see a move lower to retest the 50-day moving average at $155.14. (For more, see: Why Stocks May Stage a Summer Rally.)
Chart courtesy of StockCharts.com. The author holds no position in the stock(s) mentioned except through passively managed index funds.

Email ThisBlogThis!Share to TwitterShare to FacebookShare to Pinterest
Labels: Investopedia.

Email ThisBlogThis!Share to TwitterShare to FacebookShare to Pinterest
Labels: CNBC, MAKE IT

Christine Wang
PayPal shares rose nearly 1 percent post-market after the company said it has reached a $2.2 billion deal to buy iZettle, a European financial technology start-up.
Shares of AmTrust Financial Services gained 7 percent in extended trading after activist investor Carl Icahn disclosed a large position in the insurer. In a letter to AmTrust's board, Icahn laid out his opposition to a plan to take the company private.
Nordstrom shares fell 7 percent in after-hours trading. While the retailer posted better-than-expected earnings, Nordstrom reported same-store sales growth that missed analyst expectations. The company said comparable sales rose 0.6 percent during the first quarter. Wall Street had projected growth of 1.1 percent.
Shares of Applied Materials fell more than 4 percent in the extended session. While the semiconductor supplier beat Wall Street expectations for earnings and revenue, its sales projections fell short.
For the third quarter, Applied said it expects revenue between $4.33 billion and $4.53 billion. Analysts had forecast third-quarter revenue of about $4.53 billion, according to a Thomson Reuters consensus estimate.

Email ThisBlogThis!Share to TwitterShare to FacebookShare to Pinterest
Labels: CNBC.