On the morning of mass protests against his government, Donald Trump attacked “radical left” Democrats campaigning to disband Immigration and Customs Enforcement (Ice), a government agency centrally involved in the policy of separating undocumented immigrant families at the southern border. 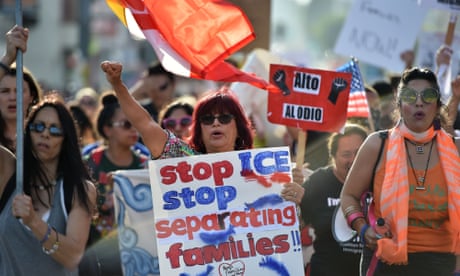 “To the great and brave men and women of ICE,” Trump tweeted, “do not worry or lose your spirit. You are doing a fantastic job of keeping us safe by eradicating the worst criminal elements. So brave! The radical left Dems want you out. Next it will be all police. Zero chance, It will never happen!”
Trump’s hardline immigration policy, repeated at large, campaign-style rallies, is a central pillar of his appeal to his supporters ahead of November’s midterm elections.
It is also key to motivating opposition to the president and his party. As large parts of the US sweltered under a heatwave on Saturday, organisers told the Guardian they expected more than 750 protests to be staged across the country.
Thousands were expected in Washington DC, where this week almost 600 activists – the actor Susan Sarandon among them – were arrested at a Senate office building.
Crowds duly gathered in Lafayette Square park, across from the White House, although the Families Belong Together march was off to a slow start. Organised by MoveOn, the American Civil Liberties Union and dozens of other advocacy groups, the event was due to feature star speakers Lin-Manuel Miranda, Alicia Keys and America Ferrera.
John Holland of Takoma Park, Maryland, the de facto hippie suburb of Washington, was among a group of Buddhist-affiliated protesters who held hands, sang and played a Tibetan singing bowl as an early speaker described the “amazing effect it can have on everyone if we move slowly”. Asked why he had decided to brave the 95F (35C) heat, Holland quipped: “Peer pressure.”

Like many present, he had also attended the Women’s March on the National Mall in January 2017. The capital has turned into a site of major anti-Trump protest, including the March for Science last year and more recently a student-led pro-gun control effort, the March for Our Lives.
Trump was not in the White House on Saturday, having travelled to his golf club in Bedminster, New Jersey. He was expected to begin interviewing candidates to replace Anthony Kennedy, the supreme court justice who announced his retirement this week.
The protests against Trump were also due to focus on that supreme court pick, which is expected to turn the court sharply to the right, placing in jeopardy rulings such as Roe v Wade, the 1973 opinion which guarantees the right to abortion. This week, the court upheld Trump’s travel ban against Muslim-majority countries and handed down a ruling that dealt a heavy blow to unionised labour.
Shortly after his election, Trump said the right to same-sex marriage was “settled” but said he would appoint “pro-life” justices who would send abortion law “back to the states”. On Air Force One on Friday, the president said Roe v Wade and LGBT rights would not be discussed with candidates to replace Kennedy. He is, however, working from a list of possible judges vetted by conservative groups.
He confirmed on Saturday that he will announce his pick on 9 July.
“This is an all hands on deck, stop the madness moment,” national protest organiser Ai-jen Poo told the Guardian. “It’s not a red or blue thing … what you are seeing is the downright refusal to accept this administration’s policies.”
The Women’s March organiser Linda Sarsour said she thought “news of the Kennedy retirement really shook people up” and said: “This administration is not to be trusted.”
On Saturday, protests were also held in other countries. In London, dozens of Americans gathered outside the new US embassy. More than 50 demonstrators, including children, held banners and placards. Children held a string of a paper figures while a placard signed by Dakata, aged five, read: “We care, we care, we care”.
Earlier this month, Trump signed an executive order stopping the separations policy, after intense public outcry over images and recordings of unaccompanied children held in cages at federal facilities.
But the order was unclear and the administration has been criticised for its lack of a plan to reunite the more than 2,300 children who were separated with their parents. The Trump administration is now claiming the right to detain immigrant families indefinitely, sidestepping a 1997 court settlement that limits how long children can be held.
Around 2,000 children brought across the Mexican border without documentation are still in government custody.
In Lafayette Square on Saturday, Kate Earle of Maryland held a “Make The Handmaid’s Tale Fiction Again” sign. She told the Guardian “reunification of families is a start but locking them up together is not a solution”.
Pressure on Ice has also come from within. Nineteen senior agents this week sent an open letter to Kirstjen Nielsen, Trump’s homeland security secretary, saying it should be disbanded.
The investigators said Trump’s immigration crackdown was interfering with the agency’s work against transnational criminal groups, and suggested Ice be split into two organisations.
Trump’s reference to “radical left Dems” may have been inspired by the victory in a New York Democratic primary this week of Alexandria Ocasio-Cortez, a 28-year-old who defeated Joe Crowley, a senior House figure, and will stand for election to Congress in November.
Ocasio-Cortez describes herself as a democratic socialist and campaigned on a platform that included the abolition of Ice. The president remains unmoved.
“The Democrats are making a strong push to abolish ICE,” Trump wrote on Saturday, “one of the smartest, toughest and most spirited law enforcement groups of men and women that I have ever seen. I have watched ICE liberate towns from the grasp of [the gang] MS-13 & clean out the toughest of situations. They are great!”