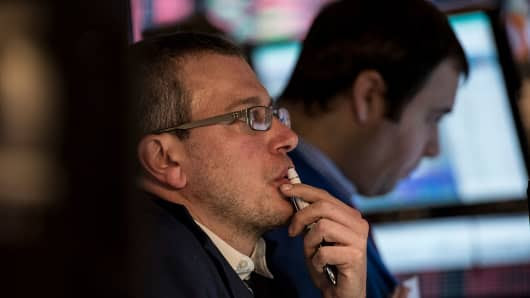 Andrew Renneisen | Getty Images
U.S. stock index futures pointed to a higher open on Thursday morning as traders eyed a big batch of data and continued to digest the U.S. Federal Reserve's decision to increase interest rates.
Initial jobless claims, housing starts, and the Philly Fed Index are all due to be released at 8:30 a.m. ET, with JOLTS data set to come out at 10:00 a.m. ET.
On the earnings front, Dollar General is set to report before the bell, while Adobe Systems is due to report after the bell.
In Europe the pan European Stoxx 600 Index was around 0.57 percent higher on Thursday morning.
In oil markets, Brent crude traded at around $52.27 a barrel on Thursday morning, up 0.89 percent, while U.S. crude was around $49.31 a barrel, up 0.92 percent.
at March 16, 2017 No comments: Links to this post