Trump Clashes With German Leaders as Tranatlantic Tensions Boil Over: The Guardian | World | Europe | Germany - May 31, 2017:

Donald Trump has escalated a row between the US and Germany in an early morning tweet accusing Berlin of unfair trade relations and not paying its way in the Nato alliance.
Trump’s tweet, declaring German policies “very bad” for the US and vowing to change the situation, came a few hours after the German foreign minister, Sigmar Gabriel, declared that the administration’s “short-sighted policies” were weakening the west.
The discord between the Trump administration and Berlin is just the sorest point in increasingly troubled transatlantic relations, aggravated by the president’s European trip last week. Since then, simmering tensions have boiled over in a public spat.
Trump’s omission of a clear commitment to collective defence and his harangue of European leaders for their military spending at a Nato summit on Thursday exposed the extent of the rift. A dramatically bad week for western cohesion was capped by his refusal to join six partner states at the G7 summit in Sicily in a commitment to the Paris agreement to combat climate change.
“I thought it was the least effective visit of any American president to Europe since the 1940s,” Nicholas Burns, a former undersecretary of state for political affairs, said. “I couldn’t think of another visit that was so fraught with difficulties, deep substantial division, disregard and disrespect.” 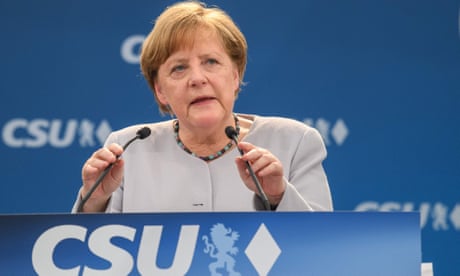 German chancellor tells election rally in Munich that Europe must take its fate into its own hands after ‘unsatisfactory’ G7 talks
In the summit’s wake, Angela Merkel declared that Europe would have to “take our fate into our own hands” and could not longer depend on leadership from the US.
Trump had been restrained in his use of Twitter during the European tour, but he released a salvo of inflammatory tweets coming out of the Memorial Day long weekend.
His tweet aimed at Berlin said: “We have a MASSIVE trade deficit with Germany, plus they pay FAR LESS than they should on NATO & military. Very bad for U.S. This will change.”
The president was referring to a commitment made by US allies in 2014 to spend 2% of their GDP on defence. German currently spends 1.2% on its military. That figure is gradually increasing but German leaders acknowledge it is unlikely to reach 2% by the target date in 2024. Merkel argues that spending on development aid and crisis prevention should be included in the figure.
Germany does maintain a substantial trade surplus with the US, driven by its export-led growth. But German officials have repeatedly pointed out to the Trump administration that when it comes to the car industry – which seems to be the focus of the president’s ire – the German firms BMW and Mercedes make most of their cars for the US market in the US, employing thousands of workers and leading US auto exports to the rest of the Americas.
Contrary to Trump administration complaints, German authorities have argued against European Central Bank monetary policies that have weakened the euro and made German exports cheaper.
Jim Townsend, a former deputy assistant secretary of defence for European and Nato policy, said that Trump had needlessly exacerbated a rift between old allies.
“We continue to haemorrhage and we have to staunch that because it’s a self-inflicted wound,” Townsend said.
Criticism of the US by Merkel and Gabriel (from the opposing Social Democratic party) is likely to have been sharpened by the fact that distance from Washington will play well in the run-up to German elections among voters who are overwhelmingly anti-Trump across the political spectrum.
The German chancellor’s main rival, the Social Democrats’ leader Martin Schulz, voiced outrage at what he described as Trump’s “humiliating treatment” of Merkel in Brussels. Even in the midst of an election campaign, Schulz said, “the chancellor represents all of us at summits like these, and I reject with outrage the way this man takes it upon himself to treat the head of our country’s government”.
At a press briefing on Tuesday, White House spokesman Sean Spicer attempted to downplay the rift between Trump and Merkel. “They get along very well. He has a lot of respect for her,” said Spicer. “And he views not just Germany but the rest of Europe as an important American ally.”
German observers said the spat with Trump had undoubtedly helped Merkel’s campaign, helping present her as a force for stability and rationality in uncertain times.

Once he reached Brussels, Trump seemed to abandon Obama’s foreign policy rule of ‘don’t do stupid shit’, and his inability to work by consensus was stark
Merkel has been able to burnish her credentials as the emerging leader of the democratic world, with a visit by the Indian prime minister, Narendra Modi, on Tuesday. In remarks cleared aimed towards Washington, where Trump has yet to declare his position on the Paris agreement, Modi said it would be “morally criminal” not to act on climate change, and praised Merkel’s “vision”.
The Chinese prime minister, Li Keqiang, is also due to make the trip to Berlin later in the week ahead of Friday’s EU-China summit. Beijing was disappointed by the Trump administration’s failure to send a senior representative to its mid-May summit on its “Belt and Road” global investment initiative.
Adam Thomson, a former British ambassador to Nato and now the director of the European Leadership Network, said transatlantic relations had not quite reached their nadir of 2003, during the George W Bush administration, when France and Germany voted against the US and UK on the UN security council on the Iraq war, but the pervasive sense of drift was getting worse.
“What is different is the leadership,” Thomson said. “Bush’s leadership of the north atlantic alliance was divisive. Obama’s was selective. But it is debatable whether there is any leadership at all under Trump.”