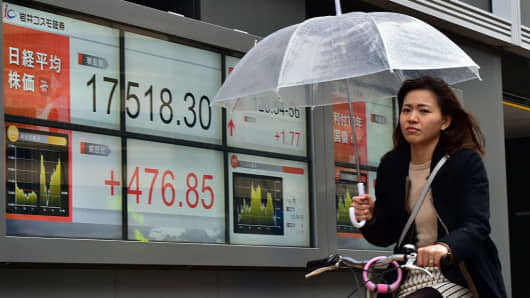 In Japan, the Nikkei 225 was up 1.38 percent while the Topix gained 1.60 percent after market open. Across the Korean strait, the Kospi was up 0.63 percent.

Down Under, the ASX 200 trimmed some of its early gains but still traded up 0.73 percent; earlier the index was up as much as 1.07 percent. The energy sector, which rose as much as 2 percent, pared gains to trade up 0.19 percent, while the financials sector was up 0.58 percent.
Evan Lucas, market strategist at spreadbetter IG, wrote in a morning note that the BOJ's move was "a net positive for risk, net positive for international trade and increases in fund flows in Asia. All are seen as a macro positive."

Oil prices were down in Asian trading hours, with U.S. crude futures lower by 1.16 percent to $33.23 a barrel while globally traded Brent was down 1.44 percent at $35.49. Last week, oil prices made some headway with U.S. crude gaining 10.81 percent for the week and Brent gaining 13.90 percent after there was speculation over a possible deal between OPEC and non-OPEC producers to cut production in the face global oversupply.
Energy plays traded mixed, with shares of Santos down 0.63 percent while Woodside Petroleum was up 0.36 percent and Oil Search gained 0.62 percent in early trade. Japan's Inpex was flat while Japan Petroleum gained 1.13 percent while South Korea's S-Oil was up 0.77 percent.
Banking and financial stocks across the region were mixed. Major banks in Australia traded between down 0.22 percent and up 1.20 percent, with ANZ leading the pack.
In Japan, banking stocks were mostly down, with major players extending their losses from Friday after the BOJ's announcement. A negative interest rate will likely see their profits dented. Mitsubishi UFJ was down 5.61 percent, SMFG fell 7.01 percent, and Mizuho Financial was down 5.93 percent.
Exporters, on the other hand, were mostly up as the dollar-yen pair traded higher at 121.31. A weaker yen is a positive for exporters as it increases their overseas profits when converted into local currency.
Shares of Toyota, Nissan and Canon were up between 1.33 and 2.42 percent while Sharp was down 2.88 percent in early trade.
The Japanese electronics maker currently has two competing investment offers; one from Taiwan's Hon Hai Precision Industry, better known as Foxconn, and one from a Japanese state-backed fund.
Reuters reported this morning that Toyota would halt all production at its Japan assembly plants from February 8 to 13 due to a steel shortage, following an explosion at a steel plant operated by one of its affiliates. Production is reportedly said to resume on February 15.
Shares of troubled air bag manufacturer Takata were down 6.81 percent, after reports said last week its CEO had no plans to stand down as of now. It had earlier been reported that the CEO would offer his resignation in a sign the company took responsibility for triggering a huge vehicle recall.
South Korean blue chip stocks were mixed with shares of Samsung Electronics gaining 0.87 percent, Kepco up 1.52 percent, and Hyundai Motor down by 0.75 percent.
Australian resources producers also traded mixed with Rio Tinto up 0.72 percent while BHP Billiton and Fortescue down 0.33 percent and 1.45 percent, respectively.
Stateside, major indexes finished higher on Friday. The Dow Jones industrial average rose 396.66 points, or 2.47 percent, to 16,466.30.

On the data front, a number of important economic indicators are due on Monday from China, South Korea, Indonesia and Thailand. They include the Chinese official manufacturing and services PMI for January, South Korean trade data for January and consumer price indexes from Thailand and Indonesia.

Alicia Herrero, chief economist for Asia Pacific at Natixis, said in a note that China's manufacturing PMI data would continue to slow, while services would hold up marginally.

"Services sector has surpassed manufacturing to contribute more than half of GDP growth in Q4 2015. The trend should continue in 2016," she wrote, adding, "The rise of middle-income class is supporting domestic consumption."
Also ahead, markets will watch the Reserve Bank of Australia's (RBA) meeting on Tuesday, where experts expect the central bank to leave interest rates on hold at 2 percent.

Shane Oliver, head of investment strategy and chief economist at AMP Capital, said a note on Friday, "December quarter inflation was low but in line with RBA expectations, recent Australian economic data has been okay and it's doubtful that the latest bout of financial and commodity market turmoil has been enough to move the RBA out of its "chilled out" state."

He added, "However, the latest round of worries about global growth coming at a time when domestic growth remains sluggish, national income is being hit by the continuing slump in commodity prices, the housing sector is losing momentum and inflation is low are likely to see the RBA strengthen its easing bias."

He added he expects the RBA to cut the cash rate again in the months ahead.