Wahhabism and ISIS: why US officials won’t discuss their links to Saudi Arabia

Published on Dec 7, 2015
Wahhabism is a sect of Islam that brings the Quran to a literal interpretation and even takes death as a form of punishment as acceptable under its tenets. US ally Saudi Arabia funds many of the madrassas, or schools, which promote this ideology. Omer Aziz, a writer and fellow at the Yale Information Project says Saudi Arabia’s status as an ally is why officials abstain from using the term “Wahhabism.” If they did, the American population would connect the dots between Wahhabism, ISIS, and the Saudi royal family.
at December 07, 2015 No comments:

Katie Allen
UK retailers suffered a drop in sales in November as record take-up of online shopping and a late Black Friday boost failed to make up for slow trade in the rest of the month.
Retailers will be hoping Christmas food and gift shopping will turn things around after sales in stores and online were down 0.4% in like-for-like terms in November when compared with a year earlier, according to the British Retail Consortium (BRC).

For non-food products, one in every five pounds was spent online in November, the BRC said. At 22.4% the online penetration rate for non-food was the highest since the group started publishing internet sales data in late 2012, up 2.1 percentage points on November 2014.

Early indications from the Black Friday shopping weekend, when UK retailers follow the US tradition of flash sales, suggest it was an online event this year. The BRC said online sales of non-food products for the month as a whole grew 11.8% on a year earlier.


Germany on course to accept one million refugees in 2015

Germany registered 964,574 new asylum seekers in the first 11 months of the year, putting Europe’s top economy on track for a million arrivals in 2015, official figures have shown.
Some 206,101 migrants entered the country in November alone, a new monthly record, up from a previous high of 181,166 in October, according to the interior ministry. 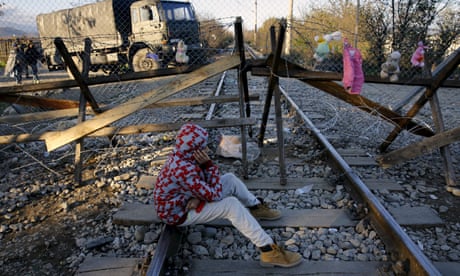 Angela Merkel holds surprise mini-summit in Brussels with nine EU countries willing to take large numbers after meeting resistance to mandatory sharing scheme
The number of arrivals for the year so far was more than four times the total for all of 2014 with Germany now the top European destination for people fleeing conflict, repression and misery in the Middle East, Asia and Africa.
The data did not provide a breakdown of the nationalities of the new arrivals.


Donald Trump calls to ban all Muslims from entering US

Ed Pilkington
Donald Trump, the leading contender to become the Republican party’s nominee for US presidential candidate, has called for a “total and complete shutdown” of the country’s borders to Muslims in the wake of the San Bernardino terrorist attack.
Trump made his most extreme pledge yet – in a race in which he has consistently pushed the boat out on issues of race and immigration – in a statement released to the media through his presidential campaign team.

GoldMoney founder and GATA consultant James Turk today discusses with King World News what he calls the "two-tiered" market in gold and silver, one tier for real metal, the other for paper claims to metal, the latter market priced by government intervention. Turk thinks he sees signs that the metals are turning back upward. An excerpt from the interview is posted at the KWN blog here:

Published on Dec 5, 2015
"A valuable Trend Tracking tip involving Janet Yellen releasing the US job numbers, “2015 is the biggest year ever for merger/acquisitions” & “an upstate Sheriff encourages licensed handgun owners to carry”."
at December 07, 2015 No comments:

The SEC alleges that Hui Feng and his firm, Law Offices of Feng & Associates P.C., acted as unregistered brokers by selling EB-5 investments to over 100 foreign investors, who were also their legal clients, and that they, directly or indirectly, received over $1.1 million in commissions in connection with these sales and are contractually entitled to at least an additional $3.1 million in commissions.  The complaint also alleges that Feng and his firm defrauded their investor clients by failing to disclose their receipt of commissions on the investments in breach of their fiduciary and legal duties to their clients, and that they also defrauded some of the entities offering the EB-5 investments.