RT News - on December 3, 2015 Time Zone of Dispatch: Kurds & US Special Forces Should be Used To Seal Turkish-Syrian Border.

With Kurdish militia and US Special Forces on the ground, there is a realistic way to shut off the illegal flow of oil from Syria into Turkey, Russian Foreign Minister Sergey Lavrov said at talks with his Serbian counterpart, Ivica Dacic.

Sealing the border between Turkey and Syria is more important at the moment than finding out who is buying the oil produced by Islamic State (IS, ISIS/ISIL), Lavrov said while speaking with Dacic in Belgrade on Wednesday. The talks come on the eve of a two-day conference of the Organization for Security and Co-operation in Europe (OSCE), currently chaired by Serbia.

The Guardian | Business | Economics - December 2, 2015: The Fed and The ECB: When Monetary Policy Diverges.

The Fed and the ECB: when monetary policy diverges

Mohamed El-Erian
Over the next few weeks, the US Federal Reserve and the European Central Bank are likely to put in place notably different policies. The Fed is set to raise interest rates for the first time in almost 10 years. Meanwhile, the ECB is expected to introduce additional unconventional measures to drive rates in the opposite direction, even if that means putting further downward pressure on some government bonds that are already trading at negative nominal yields.

Patrick Wintour
Britain is to launch airstrikes against Islamic State militants in Syria immediately after MPs voted overwhelmingly on Wednesday night to authorise an extension of bombing.
At the end of a day of extraordinary rhetoric and private anguish, MPs voted by 397 to 223 in favour of sending Tornados from the RAF base in Cyprus to seek out Isis targets in Syria. 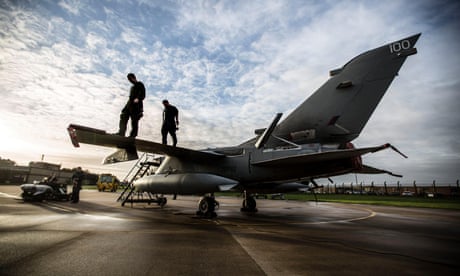 Preparations made at RAF Marham in Norfolk as MPs voted to back airstrikes against Islamic State
Two British fighter jets were seen taking off from their airbase at RAF Akrotiri in Cyprus hours after the vote. Their destination was not immediately clear.
An all-day debate in parliament closed with an oratorical tour de force by the shadow foreign secretary, Hilary Benn, which drew cheers, waving of order papers and applause from across the packed chamber, including from many Tories.
A total of 66 Labour MPs rejected the advice of their leader Jeremy Corbyn and voted with the government, but only seven Tories ignored the party’s three-line whip and voted to oppose airstrikes.

Daniel Hurst
Aprox
8m ago00:17
Ok, let’s catch up on a few things that have broken out while we’ve been occupied elsewhere.
Herald Sun reporter Ellen Whinnett reports that the former industry minister and once Turnbull confidant (until he was dumped) Ian Macfarlane is “set to defect from the Liberals and join the Nationals party room under a deal orchestrated by agriculture minister Barnaby Joyce.”
Will wonders never cease?
17m ago00:09
The Labor efforts to throw out consideration of the tax bill failed.
It’s coming on for consideration now.
22m ago00:03
We are still coming to terms with the practical impact of the deal between the government and the Greens. Labor’s view certainly is there is nothing in these Greens amendments that will stop the government from achieving what the opposition says is their primary objective: the objective of shielding their biggest political donors from tax transparency.
The Greens view is some transparency is better than no transparency, and today is a down payment. They concede there is more work to do.