Ian Black
20m ago01:27
Parisians continue to hold vigils around the capital, even as night falls.
My colleagues Luke Harding and Kim Willsher spoke to some of them.


Outside the Casa Nostra pizzeria, a crowd gathered for the first time after police took away a cordon. The restaurant had been unusually empty the night before, with just a couple of customers at tables and a few more drinking outside. Its Tunisian cook, Ammar Bensalem, was in the back kitchen with his friend Fatih. And then the shooting started: sudden bursts of automatic fire.
“I heard shots. We hid in the kitchen. Eight people joined us,” Bensalem said on Sunday, outside his workplace of two years. He said he emerged to find carnage: a woman alive but bleeding profusely from the arm, broken glass, police. Five people had been shot dead immediately in front of the restaurant. Medics had taken them away.
Beneath its menu sign – “Pizza, Pasta, Salad” – rivulets of blood were still visible.

As fear receded, some families emerged defiantly with children. “This time it’s too much. I don’t want to leave this kind of world to my kids,” Sophie DuPont said, speaking outside La Belle Equipe restaurant in the rue de Charonne, where 18 people were murdered. She was with her baby daughter and four-year-old. She added: “If we have to fight, we will fight, just as our grandfathers did.”
Around them, people were laying flowers and candles. Two bullets hit the neighbouring sushi bar; someone had threaded flowers through the holes. There were messages. Most were positive: “Peace, love, unity for my beautiful street”, “Dear Freedom” and “I am Paris” written on three tubs of crocuses. A few were angry: “Death to illiterate barbarians.”
And: “We won’t allow you to make this world rotten.”

33m ago01:14
My colleague Emma Graham-Harrison has been delving into the story of the passport found near the body of the one of the Paris suicide bombers – was it the passport of a Syrian refugee, or someone purporting to be one?

Daniel Boffey
The investigation to identify members of the terrorist cell behind France’s deadliest attack since the second world war has spread to Belgium, Greece and Germany as a 29-year-old Frenchman was named as one of the killers. 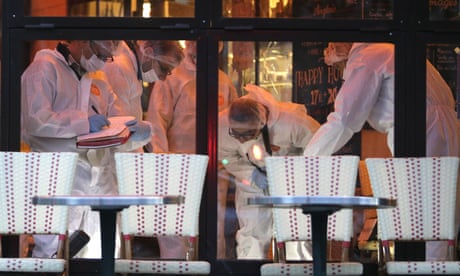 Omar Ismaïl Mostefai has been named in France as one of the attackers with a number of others now being identified through documents
Multiple sources told French media that a severed finger found at the Bataclan theatre, where three gunmen killed 89 people during a concert on Friday night, belonged to Omar Ismaïl Mostefai, a petty criminal of Algerian origin.
Paris prosecutor François Molins said the suspect was born in the poor southern Paris suburb of Courcouronnes, and had been flagged as a radicalisation risk in 2010 but “never been implicated in an investigation or a terrorist association”.
A property in Courcouronnes linked to Mostefai was searched on Saturday, and his father, brother and brother’s sister were detained by police. It emerged on Sunday that the getaway vehicle used in the attacks on a number of restaurants and bars in Paris had been found in Montreuil, an eastern suburb of the French capital.
Molins also said that a Syrian passport, belonging to a man born in 1990 who was not known to the French authorities, had been found lying close by the bodies of two other jihadis, who both blew themselves up in the course of their attacks.
In Greece, citizen protection minister, Nikos Toskas, said earlier that the passport’s holder had entered the European Union through the Greek island of Leros on 3 October, adding: “We do not know if the passport was checked by other countries through which the holder likely passed.”

Latest coverage as hunt continues for network behind Isis attack that left 129 people dead
Reports that a second Syrian suspect had entered Europe via Greece were denied by a Greek official. “These reports are untrue and need clarification,” the official said.