There are signs that the U.S. dollar, instead of consolidating the sharp rise that peaked last March, might be reversing its previously rising trend.
Certainly a weakening dollar fits with the Federal Reserve Board's deferring attempts to raise interest rates from the zero bound, and reflects the growing chatter that negative rates cannot be ruled out. It should also interest us that there is evidence the Americans are beginning to take seriously the threats to the dollar's hegemonic status, and this is no longer just seen as a speculative possibility. ...
... For the remainder of the commentary:
https://www.goldmoney.com/decline-of-the-dollar-the-consequences?gmrefco...

A suicide bombing at a Shia Muslim mosque has killed at least 10 people in the Pakistani province of Baluchistan.
Six children were among the dead and more than 20 people were wounded in the attack in the town of Bhaag, said the provincial home minister, Mir Sarfaraz Ahmed Bugti,.
No claim of responsibility was made following the attack. Baluchistan, in eastern Pakistan, has been wracked by separatist violence and rising sectarianism for almost a decade.
Security has been beefed up across Pakistan before the two-day Shia festival of Ashura. Public gatherings and marches are planned in most Pakistani cities on Friday and Saturday to commemorate the death of Hussain, the grandson of the prophet Muhammad.
Mobile phone services will be suspended in cities in an attempt to foil remote-controlled bombings. Police have set up extra checkpoints and imposed restrictions on movement in some areas.
Fears of violence have been heightened this year after Taliban splinter groups pledged allegiance to the Syria- and Iraq-based Islamic State, which has repeatedly targeted Shias. Analysts say Pakistani groups hoping for patronage want to impress Islamic State
Shia Muslims make up about 20% of the Pakistani population. The rest are mostly Sunni Muslims.
In a separate development, the Pakistani military said on Thursday that it had carried out its first night-time drone strike, killing several militants.
“Our own drone Burraq fired missiles and hit sanctuaries of terrorists in South Waziristan near the Afghan border on Thursday,” said a security official.
Pakistan launched the Burraq in March, and the first strike by one of the drones was reported in early September.


Vladimir Putin accuses US of backing terrorism in Middle East

Shaun Walker
The Russian president, Vladimir Putin, has launched a stinging attack on US policy in the Middle Eas, accusing Washington of backing terrorism and playing a “double game” in the Middle East. In a speech on Thursday at the annual gathering of the Valdai Club, a group of Russian and international analysts and politicians, Putin said the US had attempted to use terrorist groups as “a battering ram to overthrow regimes they don’t like”.
He said: “It’s always hard to play a double game – to declare a fight against terrorists but at the same time try to use some of them to move the pieces on the Middle Eastern chessboard in your own favour. There’s no need to play with words and split terrorists into moderate and not moderate. I would like to know what the difference is.” 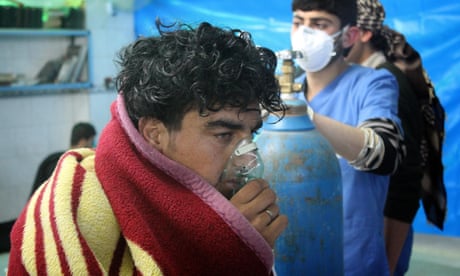 Latest attack on Idlib hospital left at least 12 people dead and comes less than two weeks after a US attack on Kunduz hospital, Afghanistan
Western capitals have accused Moscow of targeting moderate rebel groups during its bombing campaign in Syria, which Russia says is mainly aimed at targets linked to Islamic State. However, Putin’s talk of “playing with words” and other statements by government officials suggest Moscow believes all armed opposition to Bashar al-Assad is a legitimate target.
Putin received Assad at the Kremlin on Tuesday, and on Thursday he underlined that he considered the Syrian president and his government to be “fully legitimate”. He said the west was guilty of shortsightedness, focusing on the figure of Assad while ignoring the much greater threat of Isis.
“The so-called Islamic State has taken control of a huge territory. How was that possible? Think about it: if Damascus or Baghdad are seized by the terrorist groups, they will be almost the official authorities, and will have a launchpad for global expansion. Is anyone thinking about this or not?”
This year the Valdai Club met at a luxury hotel in the mountain resort of Krasnaya Polyana, one of the venues for last year’s Winter Olympics. Putin arrived at the venue in a bright green Lada, part of an effort to promote the domestic car industry. He arrived late, keeping the assembled delegates waiting for nearly two hours before speaking.