Thousands Of Refugees Rush Into Croatia After Days In 'No Man's Land': The Guardian | Migration - October 19, 2015.

Stephanie Kirchgaessner
Thousands of refugees trying to make their way to western Europe have rushed over Serbia’s border to Croatia after they were stranded for days in dangerous and deteriorating conditions.
The United Nations refugee agency said that between 2,000 and 3,000 people who had been stuck in a virtual no man’s land for days had been allowed to enter Croatia, a move that is likely to put more strain on neighbouring Slovenia, which has already said it can only cope with 2,500 arrivals per day.
“Without any announcement, the borders opened. When the borders opened, everybody rushed,” said Melita Sunjic, a spokeswoman for the UN high commissioner for refugees (UNHCR). “The last person to go was a young boy without a leg, and we helped him cross in a wheelchair.”

Email ThisBlogThis!Share to TwitterShare to FacebookShare to Pinterest
Labels: The Guardian | Migration.

Tony Abbott says he will pay for table damaged during his farewell party: The Guardian | Associated Press - October 19, 2015.

Tony Abbott says he will pay for a marble table that was damaged during a party he hosted on the night he was dumped as prime minister.
Revellers partied so hard as they farewelled Abbott they allegedly broke the table as they danced on it in Parliament House on the night of 14 September.
On Monday evening Abbott issued a statement taking responsibility for the smashed table and promising to cover the cost. “On the night of the leadership change I hosted drinks in the cabinet anteroom for staff and colleagues,” he said. “During this event a coffee table was damaged.
“I have asked my office to have the Department of Parliamentary Services invoice me for the value of the table. It was my event so I take responsibility for it.” 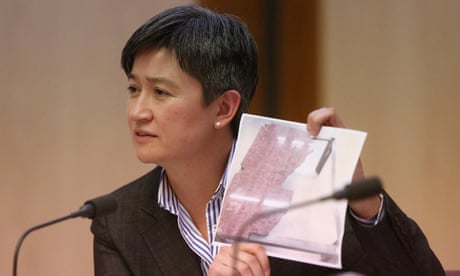 Senate estimates committee hears table in ministerial wing of Parliament House was badly damaged at party to mark Abbott’s departure as PM
A Senate estimates hearing was told on Monday cleaners had found broken pieces of the $590 table – an original piece of furniture bought for the parliament in 1988 – on 15 September and had alerted the office in charge of asset management.

Email ThisBlogThis!Share to TwitterShare to FacebookShare to Pinterest
Labels: The Guardian | Associated Press.