Deal Professor: Uber Case Highlights Outdated Worker Protection Laws The courts are trying to figure out whether Uber's drivers are contractors or employers from a standard rooted in 19th-century labor law.
Read more »
at September 15, 2015 No comments:

Wall Street at Close Report by CNBC on September 15, 2015: Dow Closes Up Triple Digits Ahead of Fed Meeting.


Dow closes up triple digits ahead of Fed meeting

Evelyn Cheng
U.S. stocks closed more than 1 percent higher Tuesday as investors eyed some of the final data reports leading into the Federal Reserve's key meeting.
"I think the market's just kind of drifting around a little bit," said JJ Kinahan, chief strategist at TD Ameritrade. "The volume's so light, I think it's the path of least resistance. There's less selling pressure on a given day because of the Fed coming out."
Stocks extended gains in afternoon trade, while Treasury yields spiked and the dollar held higher.

"In today's market it's hard to generalize because there are a fair amount of crosscurrents," said Paul Nolte, portfolio manager at Kingsview Asset Management. He's watching to see if the S&P 500 can hold above 2,000 in the near term.
The Dow Jones industrial average closed up about 230 points, or 1.4 percent, after earlier gaining as much as 273 points. The blue chip index held out of correction territory, within 10 percent of its 52-week high.

The S&P 500 and Nasdaq composite each gained more than 1 percent, both within 8 percent of their 52-week highs. In early trade, the Nasdaq dipped into negative territory.

The Russell 2000 closed up 1.06 percent, failing to hold out of correction mode.

"In a market that's been meandering this week in a wait-and-see mode, the positives in the market are coming from the commodity complex," said Art Hogan, chief market strategist at Wunderlich Securities. From the data, "your reading on the U.S. economy continues to be net positive."

"It's good economic news without forcing the Fed's hand at the end of this week," said Eric Lascelles, chief economist at RBC Global Asset Management.
"None look great in terms of their headline but the revisions (are positive)," he said.
"There's a big camp out there that (believes) any negative news is going to keep the Fed on hold. They focus on the near-term rather than the big picture," said Robert Pavlik, chief market strategist at Boston Private Wealth. He leans towards a hike this week.

Crude oil futures settled up 1.3 percent at $44.59 a barrel on the New York Mercantile Exchange. Earlier, U.S. crude oil pared gains after the White House said it does not support a move by the U.S. House of Representatives to repeal a 40-year-old ban on exports of crude oil.

The energy sector jumped more than 1 percent following the gains in oil.
"Oil prices are a little higher now so we'll get some help from there," said Peter Cardillo, chief market economist at Rockwell Global Capital.

As traders awaited a possibly historic decision on short-term interest rates, significant market moves were not expected ahead of the Fed meeting.

"Everything is coiling and waiting for Thursday," said John Caruso, senior market strategist at RJO Futures.

"The trading ranges are shrinking day by day as we move into Thursday," he said. "There's a lot of big cash positions out there."
The Dow closed down 62 points on Monday to post its narrowest intraday trading range since Aug. 18.

The Federal Open Market Committee could raise short-term interest rates for the first time in more than nine years at its two-day meeting, which begins Wednesday and culminates in a statement release and press conference Thursday.

Writing today for the newspaper DNA in Mumbai, investment adviser Harsh Roongta explains, if a bit inadvertently, how the Indian government's gold bond scheme is structured to reduce demand for the monetary metal and thus push its price down. Roongta's analysis is headlined "Gold Bond Scheme Comes with Attendant Costs" and it's posted at DNA India here:

Email ThisBlogThis!Share to TwitterShare to FacebookShare to Pinterest
Labels: GATA .

Europe accelerates gains to close up; Fed in focus: European Markets at Close Report by CNBC on September 15, 2015.


Europe accelerates gains to close up; Fed in focus

U.S. stocks traded mostly higher on Tuesday, boosting European afternoon trade, as investors around the world wait to see if the Fed will finally raise interest rates this week, for the first time in nine years.
The U.S. central bank will meet on Wednesday and announce its decision on Thursday. Economists are divided as to whether a rate rise will ensue this month, given recent volatility in global markets and renewed concerns about the risk of an economic "hard landing" in China.

Poll: When will the Fed raise rates? 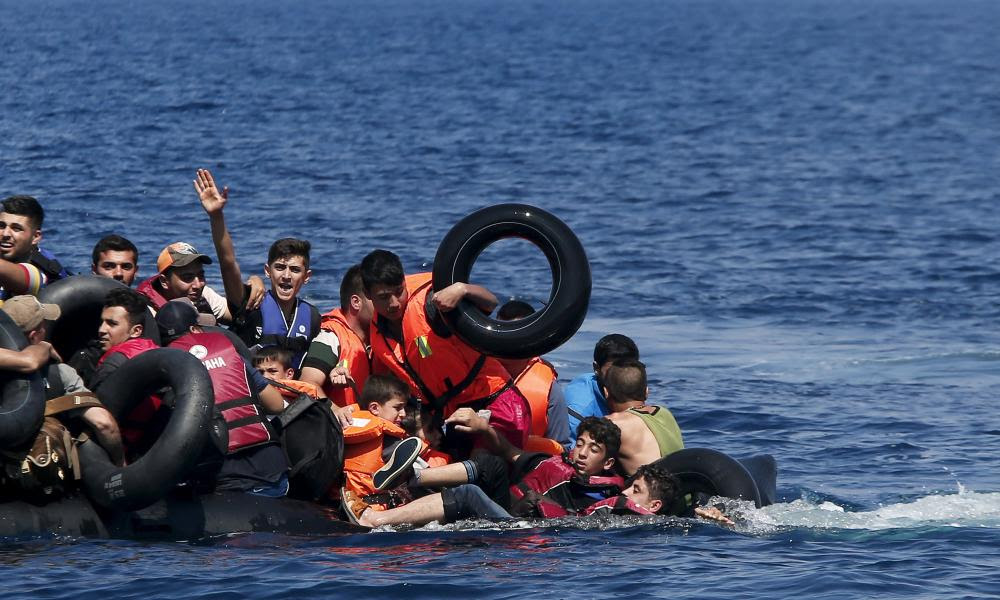 Syrian and Afghan refugees fall into the sea as their dinghy deflates near the Greek island of Lesbos. Some Syrian refugees stranded in exile may go back to their war-ravaged homeland. Photograph: Alkis Konstantinidis/Reuters
In 2005, the Guardian featured 10 newborn babies in countries across Africa. We revisited them in 2010, and again this year to speak to them and their families about how life has changed. Now aged 10, eight of the children share their daily challenges with us, as well as their hopes for the future. You can read their stories and listen to our podcast, which present an extraordinary picture of a continent undergoing dramatic change.
In Mumbai, an all-female taxi firm is helping to support women’s economic empowerment. Follow driver Dhanlaxmi Devendra in Driving Mumbai, a six-minute film about the innovative taxi service and the challenges it aims to overcome.
And a World Bank study has found women’s prospects are limited by law in 155 countries. Of the 173 countries studied for the report, 155 have at least one law limiting women’s economic opportunities, while 100 states put restrictions on the type of jobs women can do and 18 allow husbands to dictate whether their wives can work at all.


Elsewhere on the site

As world leaders prepare to adopt a new set of development goals at the upcoming UN general assembly, the toll of humanitarian crises should not be far from their minds, says Unicef chief Anthony Lake. He calls for agencies to break down the barriers between development and humanitarian response in order to reach the millions of children living in the midst of war and conflict.
On the refugee crisis, UNDP worker Mohamed Yahya described one man’s journey from Africa to Europe, which he says could signal an even bigger crisis to come. UK Labour MP Mary Creagh wrote from a camp in Lebanon about Britain’s commitments to refugees in comparison with Lebanon, where people who have fled Syria now make up more than a quarter of the population.

Video: Being Laxmi: ‘I belong to the hijra, the oldest transgender community’
Video: Bangalore or bust: can India’s clothing factories offer freedom to rural recruits?
Podcast: Africa’s children 10 years on: what happened next?


We need to reflect on how recently many “developed” countries have moved out of this situation. These kind of lives were still common in the UK up to the 50s, in the US perhaps even later. So despite the wealth of empire over 200 years or so, it took a great deal of effort and slow change. Things are changing, but slowly, but in many ways they are already improved compared with the previous generation.

Highlight from the blogosphere

Overseas Development Insitute: If the SDGs are to “leave no one behind”, donors should get serious about social protection

Email ThisBlogThis!Share to TwitterShare to FacebookShare to Pinterest
Labels: 2015., The Guardian - September 15

Industrial production decreased 0.4 percent in August after increasing 0.9 percent in July. The increase in July is now estimated to be greater than originally reported last month, largely as a result of upward revisions for mining and utilities. Manufacturing output fell 0.5 percent in August primarily because of a large drop in motor vehicles and parts that reversed a substantial portion of its jump in July; production elsewhere in manufacturing was unchanged. The index for mining fell 0.6 percent in August, while the index for utilities rose 0.6 percent. At 107.1 percent of its 2012 average, total industrial production in August was 0.9 percent above its year-earlier level. Capacity utilization for the industrial sector fell 0.4 percentage point in August to 77.6 percent, a rate that is 2.5 percentage points below its long-run (1972–2014) average.

Email ThisBlogThis!Share to TwitterShare to FacebookShare to Pinterest
Labels: ESA | Manufacturing and Trade - Inventories and Sales.

Email ThisBlogThis!Share to TwitterShare to FacebookShare to Pinterest
Labels: BBC News Nigh.

By Jack Kim and Ju-min Park
SEOUL North Korea said on Tuesday its main nuclear complex was operating and it was working to improve the "quality and quantity" of its weapons which it could use against the United States at "any time".The comments follow a declaration by the North in 2013 vowing to restart all nuclear facilities, including the main nuclear reactor in Yongbyon that had been shuttered.

Chao Deng
Stocks in China led most Asian markets lower Tuesday ahead of a decision on interest rates in the U.S., while the Nikkei Stock Average eked out a gain despite a tempered assessment of Japan’s economy by its central bank.
The Shanghai Composite Index SHCOMP, -3.52%  slid 3.5% to close at 3,005.17, adding to its 2.7% loss Monday. That pushed down shares elsewhere in the region, including Australia’s S&P ASX 200 XJO, -1.53% which fell 1.5%, and the Hang Seng Index HSI, -0.49% which closed down 0.5%.
The Nikkei Stock Average NIK, +0.34%  was up as much as 2% earlier in the session but ended only 0.3% higher after the country’s central bank disappointed some investors by saying it would stand pat on its current easing program.