Bitcoin Technology Piques Interest on Wall St. Financial firms are looking at the network and software that make it possible for Bitcoin to move around the world instantly and inexpensively.
Read more »
Posted by Fernando Guzmán Cavero at August 28, 2015 No comments:

Evelyn Cheng
U.S. stocks closed narrowly mixed on Friday, winding down several turbulent trading days with gains for the week.
The Nasdaq Composite ended up about 2.5 percent for the week, recovering more than a 8.79 percent plunge, in its biggest intra-week reversal on record.
"I think everybody is probably a little exhausted from the week. I think everybody decides to leave early and we end the week pretty calmly," said Mark Heppenstall, managing director at Penn Mutual Asset Management. "The trading has become thin. It'll become easier to push us around."

The S&P 500 eked out a gain of about 1 point on the day, holding a 0.91 percent gain for the week. The index recovered from a 5.27 decline for its biggest intra-week reversal since the week of Sept. 19, 2008, when Lehman Brothers went bankrupt.
The Dow Jones industrial average closed down about 12 points after briefly falling more than 100 points in afternoon trade, with Wal-Mart and Johnson & Johnson the greatest weights on the index. The blue chip index was down 6.62 percent at its lows for the week and ended up 1.11 percent in its biggest reversal since the last week of October 1987.
The S&P 500 entered a Death Cross in morning trade Friday, with the 50-day moving average falling below the declining 200-day moving average for the first time since August 2011.
The energy sector closed up about 2 percent, off highs of more than 3 percent, but still the greatest S&P gainer for the day and the week. Crude oil topped $45 a barrel, up more than 20 percent from Monday's low.

Jeff Carbone, co-founder and managing partner of Cornerstone Financial Partners, was watching Friday's close carefully as traders head into the weekend.
"Selloff—it would show a lack of confidence," he said.
In an interview with CNBC, Fed Vice Chair Stanley Fischer said it is 'early to tell' if case for a September rate hike is more or less compelling.
"I think he studiously said not much of anything. The problem is when you say nothing everybody thinks something, so I think that's what's unfolding right now," said Dan Greenhaus, chief global strategist at BTIG.
Short-end bond yields jumped, with the 2-year Treasury note yield leaping to 0.73 percent. The 10-year Treasury yield traded near 2.18 percent. The U.S. dollar spiked, with the euro below $1.12 and the yen weaker near 121 yen against the greenback.

How will stocks close out the week on Wall Street?

Total Votes:
Not a Scientific Survey. Results may not total 100% due to rounding.
"I think a lot of it depends on the perception of the Fed," Jack Ablin, chief investment officer at BMO Private Bank, said of morning market moves. "I think the Fed has got the markets on a string right now."
He attributed the last two day's stellar gains to New York Fed President's William Dudley's comments Wednesday that a September rate hike had become less compelling.

"My view is it seems like Fed tightening is worth 6 to 7 percent in the market," Ablin said.
Read MoreAfter a week like this, market vol is ALWAYS high
The final read on August consumer confidence from the University of Michigan came in at 91.9, slightly lower than the initial print and July's figure.
The data takes particular prominence after Dudley singled out the index in comments Wednesday as an indicator of the volatile stock market's impact on the economy.

Central bank policymakers convene in Jackson Hole, Wyoming, for their annual meeting. However, Fed Chair Janet Yellen is among those not attending.
"After this week's volatility I see September as off the table," said Todd Hedtke, chief investment officer at Allianz Investment Management U.S.
"I don't think the Fed story is overly exciting despite the liftoff," he said. "I think it's certainly an important situation—the development in China and things playing out there."

Concerns about slowing growth in the world's second-largest economy increased after China devalued its currency in mid-August, setting off sharp declines in global markets over the last two weeks.
The major averages closed Thursday more than 2 percent higher and out of correction territory.
With stellar gains on Wednesday and Thursday, the S&P had its best two days since March 2009 and the Dow had its best two days since December 2008, according to Howard Silverblatt of S&P Dow Jones Indices. Still, he noted the S&P 500 has lost $1.02 trillion in the last eight days. 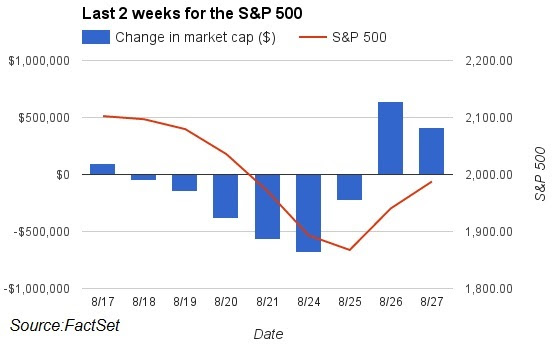 Stocks plunged more than 3.5 percent on Monday, with the Dow falling 1,089 points for its biggest one-day point swing. The major averages attempted to bounce Tuesday but selling accelerated into the close, with the Dow and S&P off more than 1 percent.

Mohamed A. El-Erian
In recent days, equity markets have been whipsawed by wild and rapid fluctuations, including a 588-point decline of the Dow Jones Industrial Average on Monday (after a dizzying day of swings that spanned about 5,000 points), an exceptionally abrupt downward reversal late Tuesday, and Wednesday's 600-point intraday swing that culminated in a frantic rally to the close. The bond markets also have exhibited notable volatility: Ten-year Treasuries have traded in a 25 basis-point range in the last four days alone.

The TF Metals Report's Turd Ferguson today reviews deliveries reported for August gold contracts on the New York Commodities Exchange and concludes:
"The entire Comex delivery scheme is nothing but a paper shuffle of warehouse receipts. Very little real gold is ever moved. Each 'delivery' month is just a shell game where the banks simply pass ownership claims back and forth."

One Administrative Hearing Scheduled for September 2015

The Federal Deposit Insurance Corporation (FDIC) today released a list of orders of administrative enforcement actions taken against banks and individuals in July. One administrative hearing is scheduled for September 2015.


China-Bashing 2016: We've Seen This Movie Before

Mike Dorning t mikedorning
With the presidential campaign in full swing, China-bashing is back in season.
The market turmoil in China and its currency devaluation has provided the latest opening for Republican presidential candidates.
Florida Senator Marco Rubio enters the fray Friday with a foreign-policy speech his campaign says will focus on China. On the campaign trail, the Republican presidential hopeful has elevated his rhetoric on China recently, calling for tougher U.S. retaliation against incidents of alleged Chinese computer hacking.

By Christoph Steitz
FRANKFURT Germany's RWE (RWEG.DE) is close to striking a financing deal for its planned 1.3 billion-pound ($2 billion) Galloper UK offshore wind park project, according to one of its executives, as its expansion in renewable energies gathers pace.

Posted by Fernando Guzmán Cavero at August 28, 2015 No comments:

Democrats Go Before Party Leaders to Give Their 10-Minute Pitches 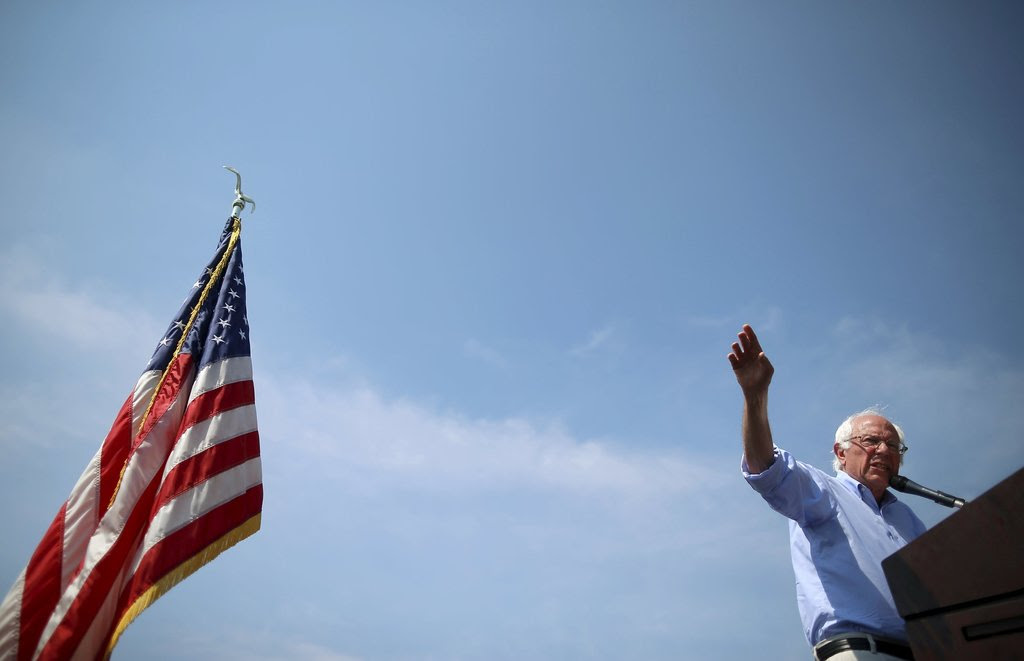 Senator Bernie Sanders of Vermont campaigning last week in Eldridge, Iowa. He and most of the other Democratic candidates will speak to the party’s national committee on Friday. Jim Young/Reuters

By Patrick Healy
Good Friday morning. The Iran nuclear deal has been making its way back to the Capitol during summer break, even if Congress has not, and it will be a focus of several events. But the big party is with the Democrats as they meet in Minneapolis to hear the candidates try to curry favor with the party’s leaders.

Jane Martinson
The BBC’s head of strategy said a conciliatory speech by culture minister John Whittingdale had changed the “mood” of the debate around BBC charter renewal but that real questions remained as he faced criticism over BBC spending.
Director of strategy James Purnell told an audience of TV executives at the Guardian Edinburgh Television Festival that the BBC still faced huge questions over its future and would not know whether the government had an anti-BBC agenda until its white paper on charter renewal early next year.

Chao Deng
China’s shares surged Friday amid suspected government buying, but the week’s volatile trading still puts the index down nearly 8% in that time.
In one wild week, China became the epicenter of a global selloff, with a five-session crash starting last Thursday triggering steep losses in U.S. and European stocks — only to be followed by surges.
To quiet worries about its slowing growth, Beijing took several easing measures this week to get its economy back in gear, including an interest-rate cut and liquidity injections. The move follows a decision earlier this month to devalue the yuan, which could make exports more competitive, as China struggles to meet its growth target of about 7% for the year.