Speech by Vice Chairman Stanley Fischer on monetary policy in the United States and in developing countries: FRB Notification - June 30, 2015.


At the Crockett Governors' Roundtable 2015 for African Central Bankers, University of Oxford, Oxford, United Kingdom http://www.federalreserve.gov/newsevents/speech/fischer20150630a.htm
Released by the Board of Governors of the Federal Reserve System

Perth Mint market researcher Bron Suchecki writes today that Zero Hedge was wrong in asserting last night that the new quarterly report from the U.S. Office of the Comptroller of the Currency shows a huge increase in issuance of gold derivatives, because, Suchecki maintains, a chart in the OCC report is erroneous.
Suchecki does not challenge Zero Hedge's larger assertion, that the report shows a fantastic increase in investment bank JPMorganChase's commodity market derivatives.
Suchecki's analysis is headlined "Precious Metal Derivatives Decline 29%" and it's posted at the Perth Mint's Internet site here:
http://research.perthmint.com.au/2015/06/30/precious-metal-derivatives-d...

Email ThisBlogThis!Share to TwitterShare to FacebookShare to Pinterest
Labels: GATA .

Carla Mozee
European stocks fell Tuesday, putting an end to their worst quarter in three years, as investors remained rattled by uncertainty over Greece’s standing in the euro and the European Union.
The Stoxx Europe 600 SXXP, -1.26%   fell 1.3% to 381.31, and no sectors ended higher.
The fall left the pan-European index down 4.6% for June, its steepest monthly decline since June 2013. It slid 4% during the second quarter, marking the worst quarterly performance since the second quarter of 2012, according to FactSet data.
Investors remained cautious Tuesday as eurozone finance ministers discussed a last-minute proposal from Greece before the country’s current bailout agreement expires. Cash-strapped Greece has proposed a two-year agreement with Europe’s bailout fund to cover its financing needs and restructure its debt.
“Europe cannot commit to a third bailout for Greece when Greece is still refusing to meet the conditions for concluding the second bailout. You cannot default on your bank and ask for a new loan at the same time,” wrote Holger Schmieding, chief economist at Berenberg, in a note late Tuesday.
“Taken at face value, this Greek proposal is a non-starter,” wrote Schmieding.
Keep track here for the latest news from Greece.
Stocks shaken : The twists and turns of Greece’s debt crisis — including a referendum to be held July 5 — has taken a toll on equity markets across Europe.
Germany’s DAX 30 DAX, -1.25%  on Tuesday fell 1.3% to 10,944.97, leaving it down 8.5% for the second quarter. France’s CAC 40 PX1, -1.63%   posted a daily loss of 1.6% to 4,790.20, and closed the quarter with a 4.8% decline.
On Tuesday, Spain’s IBEX 35 IBEX, -0.78%  dropped 0.8% to 10,769.50, and Italy’s FTSE MIB FTSEMIB, -0.48% fell 0.5% to 22,460.71. They logged second-quarter losses of 6.5% and 3%, respectively. But Portugal’s PSE 20 index PSI20, +0.39%  closed Tuesday up 0.4% at 5,551.94.
In London, the FTSE 100 UKX, -1.50%  sank 1.5% to 6,520.98, and lost 3.7% for the second quarter.
Trading in Greek stocks will be closed all week. Ahead of the suspension of trade, the Athex Composite GD, +2.03% had gained 2.8% for the quarter.
Euro and data: The euro EURUSD, -0.7921%  fell 0.7% to $1.1139, moving back to session lows as European officials discussed Greece’s latest proposal.
Earlier Tuesday, a preliminary reading on eurozone inflation in June showed consumer prices were 0.2% higher than a year earlier, a reduction from May’s reading of 0.3%.
The positive reading “has come at the same time that the euro has managed to rebound against the dollar,” said Jameel Ahmad, chief market analyst at FXTM, in emailed comments. “This says a great deal about how a weaker currency is an inflation boost in its own right. I do think the [eurodollar] needs to fall back below $1.10, and stay there for inflation prospects to be more positive and limit deflation risks.”
Other data released Tuesday showed German retail sales continued to expand in May, while jobless claims in Europe’s economic powerhouse fell further in June. 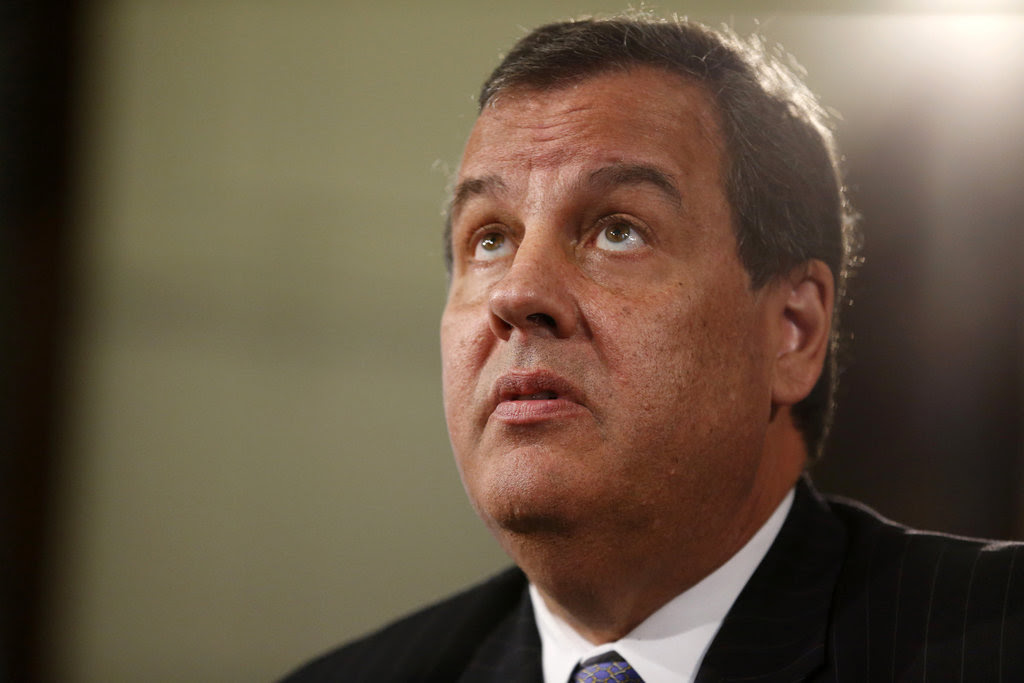 Gov. Chris Christie of New Jersey spoke to reporters during a news conference after signing the state’s 2016 budget on Friday in Trenton. Julio Cortez/Associated Press

By Maggie Haberman
Good Tuesday morning from Washington, where President Obama is hosting Brazil’s leader at the White House. Senator Rand Paul of Kentucky heads to Denver to mingle with the marijuana entrepreneurs, and Senator Ted Cruz of Texas is set to release his new book. But the political spotlight will be on New Jersey, where the governor is due to announce his next move.
Chris Christie will take the stage at his biggest town-hall-style event yet on Tuesday.
With a microphone and a setup reminiscent of the forums that made him famous, the Republican governor of New Jersey will announce that he is running for president in his childhood hometown of Livingston on Tuesday morning.

Carla Mozee
U.S. stock futures tilted higher Tuesday, as calm seemed to be returning to markets after a Greek-led selloff drove Wall Street to its worst session of the year the day before.
Investors are also set to wrap up the second quarter and the month, with a reading on consumer confidence and an update from the housing sector ahead.
Futures for the Dow Jones Industrial Average YMU5, +0.34%  rose 112 points, or 0.6%, to 17,632.00, while those for the S&P 500 index ESU5, +0.46% were higher by 15.75 points, or 0.7%, at 2,065.50. Futures for the Nasdaq 100 index NQU5, +0.30%  gained 24.25 points, or 0.6%, to 4,401.75.
Futures came off their lows following a report that last-ditch efforts to revive talks between Greece and its creditors were underway.
On Monday, stocks worldwide fell after negotiations aimed at steering Greece away from debt default broke down. On Wall Street, the S&P 500 index SPX, -2.09%  and the Dow Jones Industrial Average DJIA, -1.95%  each lost their gains for the year, as they fell 2.1% and 2%, respectively. DJIA, -1.95% The Nasdaq Composite COMP, -2.40% tumbled 122.42 points, or 2.4%, to 4,958.47.
For the quarter, the Nasdaq is holding to a thin gain of 1.2%, while the Dow and S&P 500 were looking at losses of 1% and 0.5%, respectively. The indexes are each facing declines of more than 2% for the month.
Greece on Tuesday is slated to miss its 1.54 billion euro ($1.71 billion) payment to the International Monetary Fund, and the country’s bailout program also expires the same day. Questions remain about the future of the country as it heads toward a referendum Sunday that is being framed as a vote on whether Greece should stay in the eurozone.
“Financial markets are likely to settle down a little on Tuesday following widespread panic-driven selling at the start of the week,” said Craig Erlam, senior market analyst at Oanda, in an note. “I don’t think markets were particularly ready for those developments ... as we’re just so used to an 11th-hour deal that I think people just assumed that would happen again,” he said.
Data: At 9 a.m. Eastern Time, the S&P/Case-Shiller home price index for April is due. A June reading of the Chicago purchasing managers’ index is expected at 9:30 a.m. Eastern.
The Conference Board’s report on consumer confidence for June is slated to release at 10 a.m. Eastern, and economists polled by MarketWatch expect the reading to rise to 97.5 from 95.4 in May.
Earnings: ConAgra Foods Inc. CAG, -1.30%  is expected to report fiscal fourth-quarter earnings of 59 cents a share, according to a consensus survey by FactSet.
Microsoft Corp. MSFT, -1.97%  is expected to see active trade after it said Monday it will exit the ad-sales business and has contracted AOL Inc. VZ, -1.78%  to handle all its ad sales across Microsoft’s properties.
Other markets: Chinese shares bounced back from heavy selling seen Monday, pulling the benchmark from losses that ended in bear-market territory. Japan’s Nikkei NIK, +0.63%  ended higher by 0.6%. But European stocks SXXP, -0.52%  extended their losses as investors continued to wrestle with Greek-related worries.
Oil prices CLQ5, +0.57% were higher, while gold futures GCQ5, -0.46%  slightly slipped.

Carla Mozee
Stocks across Europe tumbled Monday, with investors rattled as Greece closed its banks and stock market, with the country looking set to default on its debt as talks with creditors unraveled.
German and French shares each suffered their worst loss since Nov. 1, 2011, according to FactSet, leaving the DAX 30 DAX, +0.05%  down 3.6% at 11,083.20, and France’s CAC 40 PX1, +0.09%  lower by 3.7% at 4,869.82. Spain’s IBEX 35 IBEX, +0.62% lost 4.6% to end at 10,853.90, and the U.K.’s FTSE 100 UKX, -0.45% fell 2% to 6,620.48.
The Stoxx Europe 600 SXXP, -0.24% marked its sharpest decline since October, dropping 2.6% to 386.43, led by a 4% fall for bank shares FX7, +0.46%  . Only 16 index components posted gains. Among those few, British online grocer Ocado PLC OCDO, -1.19%  rose 1.2% following reports it’s preparing to expand overseas.
The Greek stock market GD, +2.03%  will be closed all week. Banks in Greece are closed until July 6 and locals can only take €60 ($66.70) a day out of ATMs as cash-strapped Greece curbed capital flight. The drastic moves were set in motion after Greek Prime Minister Alexis Tsipras unexpectedly proposed a referendum asking voters whether to accept reform measures demanded by the country’s lenders. The vote will take place July 5.
Talks between Greece and its creditors may “continue to go on and we could still get a resolution to the slow-motion car crash that is the Greek economy within days but that doesn’t help those looking to trade the markets,” said James Hughes, chief market analyst at eToro, in a note. “This week really now holds very few answers until we get to the referendum on Sunday.”
Greece’s debt drama will likely hold sway over markets on Tuesday, as Greece faces defaulting on a €1.55 billion ($1.73 billion) payment to the International Monetary Fund. Also as of Tuesday, Greece looks set to go without funding from international lenders.
If Greece defaults on the €3.5 billion it owes to the European Central Bank on July 20, that “would almost certainly lead to the dreaded Grexit,” Hughes added. Grexit is shorthand for the possibility that Greece will exit the eurozone or the European Union. Read: Analysts on what investors can expect next.
Italian stocks FTSEMIB, +0.83%  slid 5.2% to 22,569.95, marking their worst day since November 2011, and Portugal’s PSE 20 index PSI20, -0.12% gave up 5.2% at 5,530.50, the biggest decline since early July 2013.
U.S. stocks SPX, -2.09% DJIA, -1.95%  were sharply lower Monday, and Asian shares HSI, +1.09% SHCOMP, +5.53% overnight closed with deep losses. Chinese shares brushed off a decision Saturday by China’s central bank to cut interest rates.
The Global X FTSE 20 ETF GREK, -19.44% and U.S.-listed shares of National Bank of Greece SA NBG, -23.95%  each fell by double digits.
Read: Why Europe still wants Greece in its unhappy family.
Euro and bonds: The euro was volatile against its counterparts, sliding 1% against the Japanese yen EURJPY, -0.51% to ¥137.01, while the British pound GBPUSD, -0.1144%  had climbed above $1.41 to trade at levels not seen since 2007. Sterling later pared the gain. Against the U.S. dollar EURUSD, -0.4005% the euro turned slightly higher to trade above $1.11.
Greek bond prices were slammed lower, pushing the yield on two-year debt higher by 16.4 percentage points to 35.05%, and the yield on 10-year debt up 4.74 percentage points to 14.65%. Investors flocked to the perceived safety of German bonds, pushing the 10-year bund TMBMKDE-10Y, -0.76% yield down 12 basis points to 0.786%. But prices for bonds in so-called peripheral European markets, including Spain, Italy and Portugal, fell. Read more in Bond Report.
The European Commission on Monday called on the Greek people to vote “yes” in next week’s referendum, warning that the European Union would be fractured otherwise.