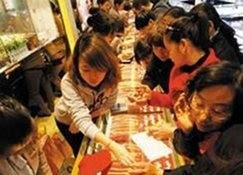 The first signs of a rush to convert financial assets into physical gold in China have emerged with a spike in physical gold payouts at the Shanghai gold exchanges.

Withdrawals of physical gold from the Shanghai Gold Exchange and Shanghai International Gold Exchange jumped 41 per cent in the trading week 8-12th June from the previous week, while year-to-date withdrawals are up 20 per cent to an incredible 1,061 tones.

To put that figure into perspective, that is higher than China’s entire last officially declared gold reserve. It represents a massive conversion of paper assets into bars of the precious metal.

The 8-12th June gold rush came before the Shanghai Composite began to sell-off late last week, quickly entering a bear market with stocks down more than 20 per cent. How much paper gold trading has been converted into the physical stuff in this market collapse?

The shift into physical gold earlier this month looks like the smart money getting out ahead of the herd. But where else can Chinese investors park their cash in an emergency?

Their fear must surely be that another deluge of money printing will be the response of the authorities. Chinese inflation has already been epic since the global financial crisis and the money printing that followed, just go there and buy things to find out.

Indeed the stock market bubble itself is a product of money printing. Investors wishing to protect themselves from the next blast of inflation, or actually to profit from it are buying gold.

How long before this begins to affect headline gold prices? Surely as the stock market tanks we will not have to wait until the next batch of figures confirm what was happening in early June.

Gold will be the next asset class to go into a bubble now that the Chinese equity bubble is bursting.

Ahold Deal Would Create One of the Largest U.S. Grocery Chains The all-share deal would combine Delhaize, the owner of the American brand Food Lion, with Ahold, which owns the Stop & Shop and Giant chains.
at June 24, 2015 No comments:

Political provocateur Mark Dice today posted an amusing video demonstrating the financial ignorance of pedestrians outside a coin shop in San Diego, California, where he tried without success to sell a 10-ounce silver bar for $10, about $150 less than what the shop presumably would have purchased it for.
Of course Dice probably would not have had any trouble unloading the bar at such a discount in Mumbai, Shanghai, Saigon, or any number of cities on the other side of the world, or maybe not in any country that doesn't presume to issue the world reserve currency -- which may be the bigger conclusion to be drawn here, the carefree ignorance of Americans having not really been news for a few decades now.
Dice's video is 4 1/2 minutes long and can be seen at You Tube here:
https://www.youtube.com/watch?v=RJm3cRRvPoM

Anora Mahmudova, Sara Sjolin
U.S. stocks ended lower on Wednesday after two consecutive sessions of gains, as Greece and its creditors made little progress in negotiating a debt deal which would avert a default.
Selling on Wall Street began in early trade, but as it became clearer that an accord wouldn’t be reached Wednesday between Greece and its international creditors, the selloff intensified.
Negotiations between Greece and its creditors made little progress.
The S&P 500 SPX, -0.74%  fell 15.62 points, or 0.7%, to 2,122.41, with losses across the board. Materials led the losses. The Dow Jones Industrial Average DJIA, -0.98%  dropped 178 points, or 1%, to 17,996.07. Excluding Apple Inc., all Dow components finished lower.
Transportation stocks were hit hard on Wednesday, with the Dow Transport index DJT, -1.86% falling nearly 2%.
The Nasdaq Composite COMP, -0.73% fell 37.68 points, or 0.7% to 5,122.41, retreating from a record high reached on Tuesday.
Jim Paulsen, chief investment strategist at Wells Capital Management, noted that while Greece headlines are moving markets, the moves are less and less significant.
“At this point, stock traders are watching the bond markets carefully, as changes in yields, which can happen rapidly, will affect stock prices,” he said.
Government bonds rallied as investors sought safety of havens on Wednesday. 10-year Treasury yield TMUBMUSD10Y, -1.49% which moves inversely to prices dropped 3 basis point to 2.38%.
Hopes that Greece and its creditors will reach a deal on Wednesday were dashed, as significant differences remained.
U.S. data: The U.S. economy contracted by a revised 0.2 % in the first quarter, a smaller decline than previously reported that mainly reflects higher consumer spending and a lower drop in exports. Market reaction to data was mostly muted.
Earnings: House builder Lennar Corp. LEN, +4.20%  reported fiscal second-quarter earnings of 79 cents a share, beating forecasts of 64 cents a share. Shares rose 4.2%.
Monsanto Co. MON, -5.73%  shares fell 5.7% after the company’s revenue disappointed investors, even as profits topped estimates.
General Motors Co. GM, -3.14%  fell 3.1% after Goldman Sachs cut the car maker to neutral from buy. The analysts said they’d rotated into Ford Motor Co. F, +1.37% which they upgraded to buy from neutral. Ford shares climbed 1.4%.
For more on today’s notable movers read Movers & Shakers column.
Other markets: Asian stock markets closed higher, with Japan’s Nikkei 225 index NIK, +0.28%  ending at a more-than-18-year high.
European stocks closed lower, following news that Greek debt talks continue without a resolution.
The ICE dollar index DXY, -0.14%  was down 0.1% at 95.32. The greenback rallied 1.6 % against the euro on Tuesday, its largest one-day gain since May 19, after a strong new-home sales report and hawkish comments from Federal Reserve Governor Jerome Powell.
Oil futures CLQ5, -1.23% dropped 1.2% to $60.27 a barrel, while gold futures GCQ5, -0.20%  settled lower for a fourth session in a row, down 0.3% at $1,172.90.
at June 24, 2015 No comments:

The Securities and Exchange Commission today announced that it has obtained an emergency court order to freeze the assets of a California-based firm and its owner charged with pocketing money raised from investors.
The SEC alleges that Christopher M. Lee operated under an alias Rashid K. Khalfani and hid his past criminal convictions while raising nearly $2 million through his firm Capital Cove Bancorp LLC for purported investments in two private funds that invested in distressed real estate. Lee enticed investors by falsely boasting that REO Opportunities Fund II LLC and Rittenhouse Square Trust LLC were "vetted, qualified, and registered" with the SEC and several other government agencies. Lee misappropriated investor money from both funds, and in some instances used it to purchase his own real estate.
The SEC further alleges that Lee and Capital Cove offered and sold membership interests in the REO fund without registering those transactions or securities with the SEC, and they filed materially false Forms ADV that did not disclose Lee's criminal record.
The SEC's complaint was filed under seal on June 18 in U.S. District Court for the Central District of California. The complaint, unsealed by the court yesterday, charges Capital Cove and Lee with securities fraud and conducting an unregistered securities offering. The SEC is seeking preliminary and permanent injunctions, the return of ill-gotten gains with prejudgment interest, and financial penalties.
The court order grants the SEC's request to temporarily freeze all assets of Lee and Capital Cove and prohibits them from soliciting, accepting, or depositing any money from investors in connection with any offering of securities.
The SEC's investigation was conducted by Junling Ma and C. Dabney O'Riordan of the Los Angeles office, and an examination of Capital Cove was conducted by Yanna Stoyanoff, Brian Krechman, and Melissa Romic. The SEC's litigation is being led by Amy Longo and Ms. Ma.
# # #
Investors may direct questions to the court-appointed temporary receiver in this case:
Robert Mosier - 714-267-3588

Corruption Is Killing Children in Angola

Western governments are buddying up to this fabulously corrupt, oil-rich country, while ignoring its abysmal record on child mortality.

Affordable Care Act and Employers: Understanding Affordable and Minimum Value Coverage
In general, under the employer shared responsibility provisions of the Affordable Care Act, an applicable large employer may either offer affordable minimum essential coverage that provides minimum value to its full-time employees and their dependents or potentially owe an employer shared responsibility payment to the IRS.
Here are definitions to help you understand affordable coverage and minimum value coverage.
Affordable coverage: If the lowest cost self-only only health plan is 9.5 percent or less of your full-time employee’s household income then the coverage is considered affordable. Because you likely will not know your employee’s household income, for purposes of the employer shared responsibility provisions, you can determine whether you offered affordable coverage under various safe harbors based on information available to the employer.
Minimum value coverage: An employer-sponsored plan provides minimum value if it covers at least 60 percent of the total allowed cost of benefits that are expected to be incurred under the plan.
Under existing guidance, employers generally must use a minimum value calculator developed by HHS to determine if a plan with standard features provides minimum value. Plans with nonstandard features are required to obtain an actuarial certification for the nonstandard features. The guidance also describes certain safe harbor plan designs that will satisfy minimum value.
For more information, visit the Affordable Care Act Tax Provisions for Employers pages on IRS.gov/aca.