Greece needs its gold to back a new currency, Commerzbank says: GATA | THE GATA DISPATCH - June 19, 2015.

Greece is unlikely to resort to selling gold because disposing of the hoard valued at about $4.3 billion would only postpone a default, Commerzbank AG said.
Bullion prices would probably fall if the nation were to sell metal on the open market, Commerzbank said in a report Friday. Using gold to raise funds may mean selling to another central bank or the International Monetary Fund, or lending out the metal, it said. ...
"Selling gold would deprive the country of its only really valuable reserves, which could be put to good use at a later date, perhaps to stabilize a new currency if Greece exits the euro," Commerzbank analysts including Frankfurt-based Eugen Weinberg wrote in the report. ...
... For the remainder of the report:

By Debbie Feinstein, Bureau of Competition
June 19, 2015
I am pleased to announce that Ben Gris has been promoted to Assistant Director of the Mergers II Division. Ben joined Mergers II in 2006 from private practice, and became a Deputy Assistant Director of the shop in 2011. His work has spanned the breadth of industries handled by Mergers II, from playing a leading role on the administrative trial team in Polypore to supervising a number of high-tech merger investigations that led to complaints or settlements, such as Honeywell/Intermec and IDT/PLX. Ben frequently collaborates with competition authorities around the world, participating on joint task forces, providing technical assistance, and evaluating the likelihood of anticompetitive effects in particular transactions, as he did while leading investigations of two simultaneous multi-billion dollar mergers in the hard disk drive industry – Western Digital/HGST and Seagate/Samsung. A graduate of Yeshiva University and Georgetown University Law Center, Ben is the recipient of the Commission’s Paul Rand Dixon Award and the Janet D. Steiger Team Award.
Please join me in congratulating Ben on his new position. James Rhilinger, who became a Deputy Assistant Director of Mergers II last year, will continue to work with Ben. And with Ben’s promotion, we will be looking for a second DAD for Mergers II.

FRB Announcements - June 19, 2015: Federal Reserve Board announces appointment of Brian F. Madigan as secretary of the Federal Open Market Committee and deputy director of the Board's Division of Monetary Affairs

Federal Reserve Board announces appointment of Brian F. Madigan as secretary of the Federal Open Market Committee and deputy director of the Board's Division of Monetary Affairs

Released by the Board of Governors of the Federal Reserve System

Anora Mahmudova
U.S. stocks ended Friday deep in the red Friday as the persistent deadlock in Greek debt talks turned investors cautious heading into the weekend.
A so-called quadruple-witching day - when options and futures for stocks and stock indexes expire simultaneously, may have contributed to the late-session selloff on Friday, according to analysts.
Rallies during the week, however, helped main indexes record weekly gains. The S&P 500 SPX, -0.53%  finished down 11.25 points, or 0.5%, at 2,109.99, with all 10 of its main sectors closing lower. Utilities and financials lead losses. The main benchmark recorded a 0.8% gain over the week.
The Dow Jones Industrial Average DJIA, -0.55%  dropped 101.56 points, or 0.6%, to 18,014.28, but posted a modest 0.6% gain over the week. The Nasdaq Composite COMP, -0.31%  ended down 15.95 points, or 0.3%, to 5,117.00, retreating from record highs set Thursday. The tech-heavy index clocked in a 1.3% gain over the week.
Setting the stage for stocks Friday was the European Central Bank, which approved an emergency loan to Greece’s banking system nearly 24 hours after eurozone finance ministers failed to strike a deal with debt-laden Greece Thursday.
Eurozone leaders will hold an emergency crisis summit Monday after finance leaders again failed to reach any kind of agreement between Greece and its creditors on Thursday.
Also read: Report risks intensifying worries over Greek banks
Channing Smith, portfolio manager at Capital Advisors, said the market rally over the past few days has been perplexing.
“Big moves on Thursday were attributed to the Fed, however, the Fed has not changed its stance. And the fact markets are at these levels despite the complete failure to find a resolution to Greece’s debt problems, is baffling,” Smith said.
Fed’s Williams eyes two rate hikes this year
“One of the suggestions is that the market expects more liquidity from central banks because of Greek problems. Though, today’s slight retreat is probably immaterial, but we will be watching if there is a selloff later in the afternoon,” Smith said.
Also read: Small-cap rally at odds with Fed’s forecast
Stocks to watch: ConAgra Foods, Inc. CAG, +10.86%  shares surged 11% after Jana Partners LLC on Thursday disclosed a nearly 7.2% stake in the company and said it intends to use its influence to change the board of directors.
FitBit Inc. FIT, +9.50%  shares jumped 9.5% on its second trading day, on top of 51% gain on Thursday.
For more on today’s notable movers read Movers & Shakers column.
Other markets: The Stoxx Europe 600 index SXXP, +0.36% closed slightly higher.
The Shanghai Composite Index SHCOMP, -6.42%  on Friday logged its worst week in more than seven years, as it fell into correction territory. The index closed down more than 6% as investors got spooked by selling that hit highflying Chinese startups this week. Elsewhere, markets gained, with a nearly 1% rise for the Nikkei 225 index NIK, +0.92%
U.S. Treasuries rallied, sending the yield on the 10-year note, which moves inversely to prices, 7 basis points to 2.26%. The drop in yield suggests general nervousness among investors.
Oil prices CLN5, -1.79%  slumped 1.4% to settle at $59.61 a barrel and declined slightly over the week. Gold prices GCQ5, -0.18%  settled 10 cents lower at $1,201.90 an ounce.
Read: Why $1,200 is important for gold

Sara Sjolin
European stock markets moved firmly higher on Friday, boosted by overnight gains in the U.S. where a dovish message from the Federal Reserve continued to buoy sentiment.

However, increased concerns that Greece will default on its debt and ultimately leave the eurozone served as a lid on the upbeat trading mood.

The pan-European Stoxx Europe 600 index SXXP, +0.36%  climbed 0.7% to 386.91, trimming its weekly decline to 0.6%.
Earlier in the week, the benchmark traded around a four-month low as investors worried the lack of progress in Greece’s reform talks with lenders could spark a “Grexit”, shorthand for the country leaving the eurozone.
The tensions heightened on Thursday night after the Eurogroup of eurozone finance ministers concluded a closely watched meeting without a deal to unlock financial aid to the debt-laden country. Donald Tusk, who presides over meetings of European leaders, called an emergency meeting of eurozone leaders’ meeting for Monday evening in Brussels in a last-ditch effort to hammer out a deal.
That meeting, described as “make it or break it” by one European official, will take place days ahead of an already scheduled European Union leaders summit.
Greece risks missing a 1.6 billion euro ($1.81 billion) to the International Monetary Fund by June 30 if it doesn’t agree on a reform deal with lenders. Read: Report risks intensifying worries over Greek banks
“With deposits still flying from banks, and exceeding recently topped-up emergency ECB liquidity, we are edging ever closer to capital controls and a potential re-run of the 2013 Cypriot fiasco,” said Mike van Dulken, head of research at Accendo Markets, in a note.
Fed optimism: European stock markets, however, shrugged off the Greek jitters and instead jumped on the positive mood seen in the U.S. Investors there have since Wednesday cheered the latest message from the Federal Reserve that the rate hikes are going to be very slow, essentially keeping monetary policy accommodative longer.
Greece’s Athex Composite Index GD, +0.57%  climbed 0.9% to 689.40, but still faced a weekly slide of 11%, which would be the worst weekly decline since late January.
Germany’s DAX 30 index DAX, -0.54%  gained 0.8% to 11,183.27, while France’s CAC 40 index PX1, +0.25%  picked up 0.8% to 4,841.14. The U.K.’s FTSE 100 index UKX, +0.04%  added 0.1% to 6,714.70.
The euro EURUSD, -0.0880%  fell to $1.1320 from $1.1362 late Thursday in New York.
at June 19, 2015 No comments:

US Stock Market Future Indications by CNBC - June 19, 2015: Greece in the spotlight for Wall Street


Greece in the spotlight for Wall Street

Dhara Ranasinghe
U.S. stock markets were expected to open a touch firmer on Friday, extending the previous day's gains, although all eyes are on whether Greece could temper sentiment.
The debt-stricken euro zone country was firmly in the spotlight amid mounting concerns that it is close to a default and an exit from the single-currency club. 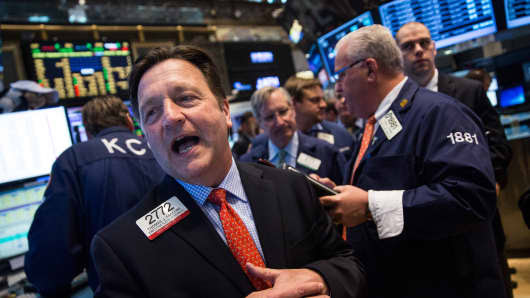 Getty Images
Traders work on the floor of the New York Stock Exchange.
Euro zone officials are expected to hold an emergency summit Monday after failing to reach an agreement on a cash-for-reforms deal for Greece at a meeting Thursday. Athens has said that without further aid, it will be unable to make a 1.5 billion euro ($1.7 billion) debt payment to the International Monetary Fund on June 30.

Large deposit outflows from Greece meanwhile have raised concerns that Athens may have to implement capital controls.
"In the absence of any major data releases today, the Greece story is likely to dominate once again," Craig Erlam, senior market analyst at currency trading firm OANDA, said in a note.

"It will be very interesting to see whether the jitters kick in as we progress through the session and investors begin to become more risk-averse ahead of such an uncertain weekend," he said.

Read MoreFinal acts in Greek drama could be rough for markets

U.S. stocks closed about 1 percent higher on Thursday, with the tech-heavy Nasdaq topping its intraday high from March 2000 as this week's dovish Federal Reserve statement boosted investor sentiment.
The strong performance on Wall Street helped underpin sentiment in Asia, where Japan's Nikkei closed almost 1 percent higher, and in Europe, where shares rose in early Friday trading. However, the Shanghai Composite tumbled 6.4 percent for its worst weekly decline in 7 years with property and banking stocks leading the index lower.

Two Fed officials speak later in the day: San Francisco Fed President John Williams talks on policy at 11:40 a.m. ET, and is the first Fed official to speak after the Wednesday's Fed meeting where the central bank lowered its growth forecasts but said the economy would likely be strong enough to withstand a rate hike this year.

Earnings due this session are expected from CarMax and KB Home.
at June 19, 2015 No comments: