By Daniel Inman
HONG KONG (MarketWatch) — Asian markets fell Thursday on continued fears that the U.S. Federal Reserve could soon start cutting its bond-buying program, though Hong Kong’s largest listing in 2013 started trading with a pop.
China Cinda Asset Management HK:1359 0.00%  , Hong Kong’s largest initial public offering this year, surged 27.5% on its debut. The financial firm, which processes Chinese bad debt from Chinese banks and converts it into equity stakes, raised $2.5 billion in an IPO that priced at the top of its price range.
A number of other companies started trading in Hong Kong. Among them was Qinhuangdao Port Co. HK:3369 0.00% , which raised $561 million after pricing its IPO at the low end of its range. Shares in China’s largest coal-port operator by capacity dropped 6.3% on its first day.
Chinese pharmaceutical retailer Jintian Pharmaceutical Group Ltd. HK:2211 0.00% , which raised $189 million in an IPO after pricing its deal at the low end of the price range, plunged 18.6% on its first day of trading. 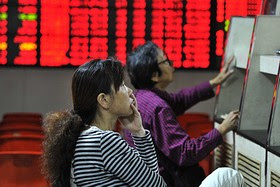 ReutersEnlarge Image
The Hong Kong stock market moved lower, with the Hang Seng Index HK:HSI -0.52% down 0.5% at 23218.12, while the Shanghai Composite CN:SHCOMP -0.06%  fell less than 0.1% to 2202.80.
More broadly, overnight trading on Wall Street gave Asia a negative lead, as U.S. stocks fell sharply after a bipartisan budget deal from Congress raised expectations that the Fed could start to scale back its stimulus measures as early as next week.
The forthcoming Fed policy meeting, set to end Dec. 18, has weighed on market sentiment in Asia in recent sessions — especially after the U.S. posted another strong monthly labor report on Friday. Speculation over when the central bank will pare its easy-money policies has been a constant theme in Asia for much of the year and has triggered a number of selloffs during the summer.
The dollar lost 0.4% against the yen USDJPY +0.32%  overnight, though it made a recovery on Thursday, trading at ¥102.79, compared with ¥102.45 late Wednesday in New York. Earlier this week, the dollar was close to reaching a fresh multiyear high against its Japanese counterpart.


The weaker yen was a catalyst for strong gains in Japanese stocks in November. Although the dollar recovered on Thursday, the Nikkei JP:NIK -1.12% was more focused on the overnight declines on Wall Street. The index lost 1.1% to 15341.82.

Fischer close to becoming No. 2 at Fed: reports
Here’s what you’ll save by ditching cable TV
Champion forecaster says economy better than GDP shows
at December 12, 2013 No comments:

A quick look at Bloomberg News's opinion section
at December 12, 2013 No comments: