Central bank and hedge fund bear raids have knocked gold futures prices down in the West only to increase demand for real metal in Asia, fund manager and geopolitical strategist James G. Rickards tells Bloomberg News in a video interview this week. It's posted at GoldSilver.com here:
http://tinyurl.com/pvs4mqs

The U.S. Senate put in motion the final steps of a bipartisan solution to the weekslong budget drama, voting 81-18 to raise the nation’s borrowing limit and fully reopen the federal government.
The 11th-hour agreement, approved on a solid bipartisan vote, diminishes the threat of a U.S. debt default by allowing the government to continue borrowing money through Feb. 7, 2014. It also reopens the partially closed government through Jan. 15, ending a shutdown that began 16 days ago because of a bitter political impasse over spending and the 2010 health-care law.
The agreement now goes to the House, where lawmakers were expected to pass it and end a weekslong stalemate that rattled financial markets, splintered the Republican Party and showcased Washington dysfunction.
See More Coverage »
at October 16, 2013 No comments:

Interviewed by King World News, fund manager Stephen Leeb muses on a point raised a few years ago by fund manager and geopolitical strategist James G. Rickards -- that a nation that recognized gold formally as money could control the world financial system. Rickards raised the point in respect to Russia and the oil trade. Leeb raises it in respect to China.

"The Chinese," Lee says, "could propose a basket of currencies that are convertible into gold, and the renminbi would be there as a major currency, much more important than the dollar. What you would then see in this country" -- that is, the United States -- "is major commodities, as well as other items, priced in units of gold.

"The Chinese are probably not ready yet. They probably don't have enough gold on hand. But we are certainly making it easier for them in the gold market. The United States is intervening in the gold market to try to keep the U.S. dollar index above 80."
An excerpt from Leeb's interview is posted at the King World News blog here:
http://kingworldnews.com/kingworldnews/KWN_DailyWeb/Entries/2013/10/16_C...

Black Marks Routinely Expunged From Brokers' Records, Report Finds A report released on Wednesday suggests that Wall Street brokers were almost always successful when they asked to have black marks erased from their records.
at October 16, 2013 No comments: 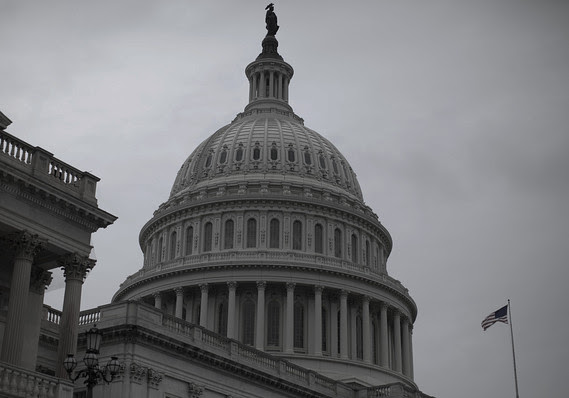 Bloomberg Image
Senate reaches a deal to reopen the government and raise the nation’s borrowing limit.

Watch Bank of America, Intel
Polya Lesova takes a look at which stocks traders will be watching during market action, including Intel, Yahoo, and Bank of America. Photo: Getty Images.

NEW YORK (MarketWatch) — U.S. stocks surged on Wednesday, lifting the S&P 500 near its record, as the Senate reached an agreement to reopen the government and raise the debt ceiling, with votes later in the day expected to end the fiscal standoff.

A major factor in helping equities withstand the latest Washington drama is the Federal Reserve’s September decision not to begin reducing its $85 billion in monthly asset purchases. “They look almost clairvoyant in their call not to taper; they saw the debate getting nasty in Washington,” Jim Russell, regional investment director for US Bank Wealth Management in Cincinnati, said of the political battle that started with a GOP effort to defund health-care legislation passed in 2010.

The bipartisan agreement would fund the federal government through Jan. 15 and raise the debt ceiling through Feb. 7, according to a Senate Democratic aide. Both the House and the Senate still need to vote on the measure, with would bring an end to the partial government shutdown now in a 16th day.


“It appears that risk assets are anticipating a conclusion to the uncertainty, which is always a positive for the capital markets. The markets are cheering not only the removal of uncertainty, but the possibility of two positives down the road: number one is deficit reduction and number two is the possible removal of sequestration cuts. Perhaps some more thoughtful deficit-reduction techniques would be in play,” said Russell.

Shares of Bank of America Corp. BAC -0.07% climbed 2.3% after the company reported a third-quarter profit of $2.22 billion versus a loss in the year-earlier period.

Stanley Black & Decker Inc. SWK -14.26%  declined 14% after the tool maker reduced its outlook for the year.

Late Tuesday, Fitch Ratings warned it might downgrade the sovereign credit rating of the U.S. from AAA as a result of the standoff over the nation’s debt limit.

“The scariest thing about this episode was the lack of understanding by some in Congress of the consequences of going into default. Just as disturbing are those in the public who backed them and did not understand the ramifications,” Elliot Spar, market strategist at Stifel Nicolaus & Co., noted in afternoon commentary.

The events of the last two weeks, along with the debt-limit showdown that took place in August 2011, raises the question of whether other currencies should be considered for reserve-currency status.

“The Chinese are watching, Europe is watching, other countries are watching. It chips away at the dollar’s credibility as the only reserve currency on the global stage,” said Russell.

On Wednesday, the dollar DXY +0.03%  edged higher against the currencies of major U.S. trading partners including the yen USDJPY -0.01% . Treasury prices were mixed, with the yield on the 10-year note 10_YEAR -2.34% used in figuring mortgage rates and other consumer loans falling 6 basis points to 2.670%.

Economic data showed Wednesday that the National Association of Home Builders/Wells Fargo housing-market index slipped to 55 in October from 57 in September, with confidence falling to a four-month low on the Washington discord and amid mortgage-rate volatility.
And, the Fed survey known as the Beige Book found roughly one third of the country experienced slower growth in September and early October.
Kate Gibson is a reporter for MarketWatch, based in New York. Follow her on Twitter @MWKateGibson.