Weekend Reading: Wall Street's View of the Fiscal Crisis As the budget shutdown in Washington continued, investors on Wall Street faced criticism that calm markets were encouraging House Republicans and making a default more likely. Here's a look at what some of the experts are saying about the fiscal crisis.

Andrew Ross Sorkin wrote about "the perversity of Wall Street's psychology: The more Wall Street is convinced that Washington will act rationally and raise the debt ceiling, most likely at the 11th hour, the less pressure there will be on lawmakers to reach an agreement. That will make it more likely a deal isn't reached."

Some skepticism returned to the markets on Thursday after the White House signaled that it would reject a Republican proposal for a short-term fix.

"The political situation has gone from horrible to bad, but we're still a long way from a constructive resolution," said Michael Purves, chief global strategist at Weeden & Company.

While the Dow Jones industrial average was up for the week, investors did move their money out of the market for Treasury bills.

"These bills are like the center of gravity for the financial universe - they really are," said Lee Sachs, a former Treasury official who now runs the lending firm Alliance Partners. "Defaulting on these would be like the laws of physics being repealed."

While nervousness is growing, DealBook's Nathaniel Popper reported that the market reaction has been muted compared with past crises.

"We all tell ourselves, 'This is something that is not going to happen,' " said David Coard, the head of fixed-income trading at the Williams Capital Group. "This would be like a black swan event - it's not something that you would have thought that the U.S. could do in a million years."

A look back on our reporting of the past week's highs and lows in finance.

Beset With Legal Costs, JPMorgan Posts Quarterly Loss JPMorgan Chase reported a net loss of $380 million for the quarter, as the nation's largest bank grapples with a raft of regulatory and legal woes.
Wells Fargo Quarterly Earnings Jump 13% The nation's largest home lender reported a new record in profits on Friday even as a slowdown in the mortgage market muted the bank's growth.

Stocks Rally, Talks Stall, Then Skepticism Returns Stock prices surged as signs of a compromise emerged in Washington, but the air quickly went out of Wall Street's balloon after it remained clear that a deal was not yet at hand.
Suit Revives Goldman Conflict Issue In a lawsuit, a former Federal Reserve Bank of New York worker raises questions about the success of Goldman Sachs in policing potential conflicts.
2 Founders of BlackBerry Weighing a Takeover Offer Mike Lazaridis and Douglas E. Fregin say that they are weighing a bid for 92 percent of the company that they don't already own.
Two Brazilian Brothers to Pay Nearly $5 Million in Insider Trading Case The S.E.C. says that Rodrigo and Michel Terpins of Brazil acted on inside information about the H.J. Heinz takeover to turn $90,000 into $1.8 million.
After High Demand, Royal Mail Shares Are Priced at High End The offering was oversubscribed seven times, with several brokerage offices staying open until the deadline for investors to register to buy the stock.

Government Standoff Shakes Trust in U.S. Debt Investors are wary of the government's ability to pay its debt on time, shifting the market for short-term Treasury bills and potentially having long-term effects.
The Trade: Complacency on Wall Street Could Be Worse Than a Panic Market participants don't think that the government will default on its debts, but the ideological fissures in Washington are deeper than investors grasp, writes Jesse Eisinger.
Madoff Trustee Asks Supreme Court to Let Him Sue Banks Lawyers for Irving Picard argue that a ruling that he lacks standing to sue banks on claims that they abetted the fraud contradicts other court decisions.
Men's Wearhouse Rejects $2.3 Billion Offer by Jos. A. Bank Men's Wearhouse rejected an unsolicited $2.3 billion takeover bid by Jos. A. Bank Clothiers on Wednesday, calling the proposed deal "highly opportunistic" and likely to draw antitrust scrutiny.
Tepid Opening for Promoter of Electronic Dance Music The company's goal is to make money from the world of dance music, which has existed on the margins of the music industry for decades but has lately become its hottest genre.

SAC Is Said to Weigh Plea Deal in Insider Trading Case Prosecutors are said to have offered the fund a deal to plead guilty and pay a penalty of about $2 billion. If SAC does not accept, a much larger fine is threatened.
New Corporate Tax Shelter: A Merger Abroad More large American corporations are reducing their tax bill by buying a foreign company and effectively renouncing their United States citizenship.
Deadlock Worry Jolts the Market for T-Bills The yield of a one-month bill rose to its highest level since 2008, a sign that investors are worrying more about the stalemate in Washington.
Deal Professor: In Twitter's I.P.O. Filing, Signs of a Start-Up That Has Matured Twitter's initial public offering appears to be the first one from a big technology company that simply prepared a thorough filing without pushing the boundaries, writes Steven M. Davidoff.

Little Fear on Wall St. of Default, at Moment The relative calm on Wall Street is worrying some investors, who fear the markets will not signal to politicians the true danger of hitting the debt ceiling until it is too late.
DealBook Column: No Way U.S. Would Allow Debt Default? Don't Bet on It The more Wall Street is convinced that Washington will act rationally and raise the debt ceiling, the less pressure there will be on lawmakers, writes Andrew Ross Sorkin.
Worsening Debt Crisis Threatens Puerto Rico Mired in debt, Puerto Rico has been effectively shut out of the bond market and is financing its operations with bank credit and other short-term measures.
Legal Side Effect in Admission of Wrongdoing to the S.E.C. A New York regulator used an admission of wrongdoing to the S.E.C. by the billionaire Philip A. Falcone to punish him in an unrelated case.
Cuban Says He Was Taken Aback by S.E.C. Charges The owner of the Dallas Mavericks said he was cooperating with the S.E.C. in an inquiry, and was surprised to learn that he was being charged with insider trading.
More Setbacks in Deal for U.S. Tire Maker The proposed buyout of Cooper Tire and Rubber by Apollo Tyres has been delayed by labor opposition in two countries, and now Cooper has filed suit against its suitor.
at October 11, 2013 No comments: Links to this post

Global insurers are operating in an increasingly complex environment. The continued fallout from the global financial crisis is leading insurers to rethink their investment portfolio risks and opportunities. In light of these factors, our new report commissioned by Blackrock, Global Insurance: Investment Strategy at an Inflection Point?, examines how insurers have shifted towards more tactical strategies that diversify across asset classes to generate returns and protect against specific market risks.

On our blog site Richard Harrison, managing director of Reputation.com, explains why SMEs are the most vulnerable to reputational risk. Yamina Saheb, former building energy efficiency analyst at the International Energy Agency, argues that enforcing a global mandatory building energy code should become a priority.

Finally on October 17th we're hosting The EU-Balkan Summit in Sofia. Bringing together politicians, decision-makers, business executives and analysts, the summit will demonstrate how the Balkan countries can pave the way to recovery and growth.
Denis McCauley
Editorial Director, EMEA
EIU
at October 11, 2013 No comments: Links to this post 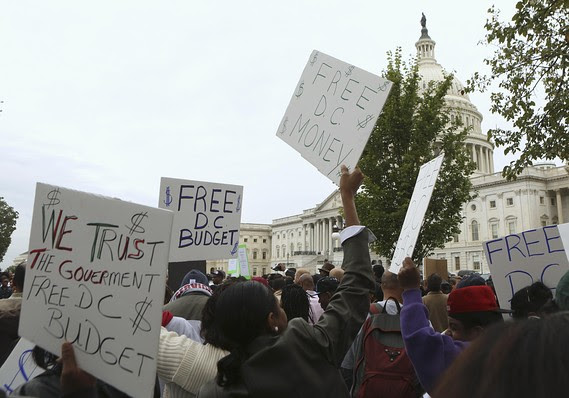 Poll: Republicans blamed for shutdown
The new WSJ/NBC News poll finds the Republican party more to blame for the shutdown. Photo: Getty Images
“Investors are getting a little bit of daylight with respect to the political landscape,” said Lawrence Creatura, portfolio manager at Federated Investors. “The market is concluding that some sort of resolution is more likely now than it has been in recent days,” Creatura added.

The AP cited officials speaking on condition of anonymity in reporting senior aides to House Speaker John Boehner and Majority Leader Eric Cantor detailed the plan at a late-night White House meeting on Thursday with senior administration officials.
President Barack Obama has said he wants to see the government reopened as quickly as possible without Republicans demanding any conditions for doing so. The government has been partially closed for 11 days as Republicans sought to defund the Affordable Care Act, or health-care legislation passed into law in 2010.

“There has undoubtedly been economic impact,” said Creatura, referring to the partial government closure. “However, the markets will correctly perceive this as a temporary one-off event and will look through it in valuing equities. Any company that comes up slightly light on the quarter now gets a pass, it’s ‘the government ate my homework excuse,’” Creatura said.

The Nasdaq Composite fell for its fist week in six, off 0.4% for the week.