Notice to Members I-13-28
September 30, 2013
Filing Requirements for Exemptions Notices under CFTC's Recently Adopted Harmonization Rules
On August 22, 2013, the CFTC adopted final rules, which harmonize certain compliance obligations for CPOs of investment companies registered under the Investment Company Act of 1940 (RICs) that are now required to register as CPOs due to recent changes to the exclusion for registration available under Regulation 4.5. See the CFTC Federal Register for the full text of the final rules. The final rules provide that a CPO of a RIC may elect to comply with CFTC Part 4 disclosure, reporting and recordkeeping requirements through substituted compliance with the applicable SEC rules for RICs, subject to certain conditions outlined in CFTC Regulation 4.12(c), including the requirement that the CPO file notice of substituted compliance with NFA under CFTC Regulation 4.12(c)(3).
The final rules also provide relief to all CPOs from the requirement of CFTC Regulation 4.23 that a CPO maintain full books and records at its main business office by permitting the CPO to delegate recordkeeping to a third party (such as an administrator). Any CPO electing to maintain books and records at a third party must file notice under 4.23(c) at the later of the time of registration or decision to use a third party recordkeeper and provide certain specified information. A separate notice must be filed for each pool for which the records will be maintained at a third party, as well as a separate notice for the CPO if its records will be maintained at a third party. A CPO that elects to maintain the books and records of a 4.7 exempt pool at a third party, however, must file notice for that pool under 4.7(b)(4) and a separate notice for the CPO under 4.23(c), if applicable.
The notice required under 4.23(c) and 4.7(b)(4) requires the CPO provide the following information: the name, main business address and phone number, and a contact person for each entity who will be keeping required books and records in lieu of the CPO. Further, the CPO will be required to upload a statement from the third party containing the specific representations outlined in the regulation.

How to file for any of the above notices

Effective October 1, 2013, CPOs claiming relief under any of the above notices will be able to do so through NFA's Exemption System at http://www.nfa.futures.org/NFA-electronic-filings/exemptions.HTML. Once logged into the system, you will be directed to the Exemption Index, which lists all Firm Level exemptions (at the top) and Pool Level exemptions (at the bottom). To file an exemption, simply select the applicable File an Exemption link and select the applicable exemption from the File Pool Exemption drop down menu.

Email ThisBlogThis!Share to TwitterShare to FacebookShare to Pinterest
Labels: NFA | Notice to Members. 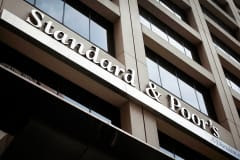 Michael Nagle | Bloomberg | Getty Images
The U.S. debt ceiling debate is unlikely to change Standard & Poor's AA+ U.S. sovereign rating, the credit ratings agency said Monday, but warned a protracted battle or a breach of next month's deadline that results in a missed debt payment could alter their calculus.

In a research note, S&P appeared to lower the probability of a repeat performance of the downgrade drama that paralyzed markets in 2011. In a controversial move two years ago, the impasse between the Congress and the White House led S&P to strip the U.S. of its AAA credit rating. The ratings agency was the only one of its peers to do so—leading it to accuse the U.S. of retaliation when the federal government sued S&P for its part in the 2008 financial crisis.

Yet at least for the moment, S&P appeared to take a more tempered approach to the saga unfolding in the nation's capitol, even as it decried the "political brinkmanship" at the heart of the current spending crisis.


"In our opinion, the current impasse over the continuing resolution and the debt ceiling creates an atmosphere of uncertainty that could affect confidence, investment, and hiring in the U.S. However, as long as it is short-lived, we do not anticipate the impasse to lead to a change in the sovereign rating," S&P said.

Goldman as Case Study, Not Hero or Villain Goldman Sachs has been a symbol for Wall Street's dark side. Its depiction as a blood-sucking "vampire squid" in a Rolling Stone article captured the public's imagination. Amid the vitriol, Goldman has had plenty of defenders who argue that the bank performed far better than its peers during the financial crisis and continues to be a profit-making machine. So which is it? Steven G. Mandis, a Ph.D. candidate in sociology at Columbia University, takes a measured, academic approach to the question in a new book, "What Happened to Goldman Sachs."
at September 30, 2013 No comments:

9/30/2013 4:47 PM ET
Wall Street suffered a notable decline on Monday, as worries about a looming government shutdown weighed on the market. Investors ignored some upbeat statistics on the manufacturing sector and focused on the budget fight in Washington.
Shares dropped at the outset of trading as the deadline for a spending deal came into view. There was a moderation during the mid-morning, but stocks slipped back toward their lows of the day during the afternoon.
The Dow Jones Industrial Average eventually finished lower by 128.57 points, or 0.8 percent, closing at 15,129.67. The Nasdaq retreated 10.12 points, or 0.3 percent, to end at 3,771.48. The S&P 500 slipped 10.20 points, or 0.6 percent, to finish at 1,681.55.
Congress continues to wrangle over a spending bill. Without a last-minute deal, many federal government operations are scheduled to shut down at midnight due to lack of funds.
The Senate rejected a bill that would have financed operations until mid-December. The bill, passed over the weekend by the Republican-dominated House of Representatives, also called for a one-year delay in the implementation of the health care reform bill, major provisions of which are set to go into effect tomorrow.
Though it was overshadowed by the worries about the budget fight in Washington, some fresh economic statistics came out today. Industry data released this morning showed that manufacturing activity in the Chicago area experienced improved growth in September.
Specifically, the Chicago Purchasing Managers index rose to 55.7 compared to a reading of 53.0 in August. Any ready above 50 indicates expansion in the sector. The Chicago PMI is considered one of the most important regional manufacturing reports.
Looking to overseas markets, Asian stocks suffered sharp declines, hurt by the prospect of a U.S. budget deadlock.
Japan's Nikkei index fell over 2 percent to end at its lowest level in about two weeks. The index dropped about 304 points, or nearly 2.1 percent.
Hong Kong's Hang Seng index retreated 347 points, or 1.5 percent. There were also losses in South Korea and Australia. China bucked the overall trend in the region, with the Shanghai composite edging up 0.7 percent.
Shares lost ground in Europe as well. The U.K.'s FTSE 100 index dropped 50.44 points, or 0.8 percent, to finish at 6,462.22. Germany's DAX index retreated 67.11 points, or 0.8 percent, to end at 8,594.40. France's CAC 40 index slipped 43.33 points, or 1 percent, to close at 4,143.44.
at September 30, 2013 No comments:

Email ThisBlogThis!Share to TwitterShare to FacebookShare to Pinterest
Labels: Wall Street at Close Report by RTTNews.

By Kate Gibson, MarketWatch
NEW YORK (MarketWatch) — U.S. stocks dropped on Monday, taking a little shine off the third straight quarter of gains, as investors worried about a standoff on Capitol Hill and the likely duration of a possible government shutdown.

“This is not a doomsday situation; at some point someone will blink and there will be an agreement. I’m not optimistic we’re going to avert a shutdown, but I don’t think it’ll last more than a few days,” said Dan Heckman, senior fixed-income strategist at U.S. Bank Wealth Management.
OBAMACARE NEWS AND RELATED STORIES
• Meet Obamacare’s insurance salesmen
• 10 careers boosted by Obamacare
• 10 things Obamacare won’t tell you
• The 50 states of Obamacare
• Follow the Health Exchange blog »

“I don’t see a tremendous amount of panic in the markets, and that to me is a hopeful sign that markets sense an agreement, and maybe an agreement that’’s positive,” Heckman added.

Lawmakers have until midnight to pass an emergency measure to keep the federal government running starting Tuesday, the beginning of the 2014 fiscal year. If an accord is not reached, hundreds of thousands of government workers could find themselves on unpaid leave.

The Senate on Monday afternoon voted 54-46 to remove a House-passed delay of the Affordable Care Act, and sent a “clean” budget bill back to the House. Senate and House Republicans are reportedly looking at a one-week measure to avoid a partial government shutdown.

The vote on Capitol Hill follows a weekend that offered no indications of progress between Republicans and Democrats, with Republicans in the House looking to stall President Barack Obama’s Affordable Care Act for a year, in addition to other changes to the law. Democrats have said they would not allow that scenario to play out. Read: Five market lessons from past government crises. 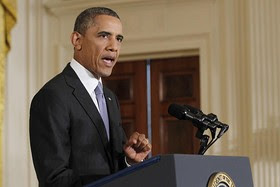 Reuters Enlarge Image
President Barack Obama
“Will the voices of government workers not getting paychecks and others in the private economy affected by a government shutdown be loud enough for a certain group of House Republicans to get off their ‘principles’ and do the right thing for the country? If not, then maybe they need to see more than a 175-point drop in the Dow Jones Industrial Average to get their attention,” noted Elliot Spar, market strategist at Stifel Nicolaus & Co., in afternoon emailed commentary.

Government shutdown: Winners and losers
Brookings Institution Senior Fellow Elaine Kamarck, a former Clinton administration staffer, explains what it was like in the White House during the last government shutdown in 1995. (Photo: Getty)

“It’s difficult to say what these politicians will eventually put together, but the largest problem the market faces here is not per se the budget controversy, or the debt ceiling, or even quarterly earnings, it’s complacency, which is unsettling because it opens the possibility of a larger decline on any negative news,” said Bruce Bittles, chief investment strategist at RW Baird & Co.

The market’s significant climb during the past 18 months has much to do with “zero-percent interest rates and quantitative easing,” said Bittles of the Federal Reserve’s monetary policy, which includes the central bank purchasing $85 billion a month in bonds. The Fed’s monetary easing both encourages investors to buy stocks and discourages investors from selling equities, said Bittles, given the policy has reduced interest rates and returns on government bonds.

Treasury prices were mostly higher, with the yield on the 10-year note 10_YEAR -0.12%   used in figuring mortgages and other consumer loans down 1 basis point at 2.615%. The 10-year note closed 13 basis points higher on the quarter.

The dollar DXY -0.03% fell against the currencies of major U.S. trading partners excluding the yen USDJPY +0.01% but including the euro EURUSD -0.01% .

Equities held their losses as a barometer of business activity in the Chicago region rose to 55.7 in September from 53 the prior month, with the latest reading “consistent with modest economic growth,” according to the ISM-Chicago association.
The U.S. Labor Department said it would not release the nonfarm-payrolls report this week should the government shut down, but Bittles views the September report as likely to be a nonevent, given the budget battle and the looming partisan dispute over the nation’s debt ceiling.

Kate Gibson is a reporter for MarketWatch, based in New York. Follow her on Twitter @MWKateGibson.
at September 30, 2013 No comments: