Email ThisBlogThis!Share to TwitterShare to FacebookShare to Pinterest
Labels: NFA | Rules and Regulations.

Notice to Members I-13-26
September 26, 2013
Effective Date of Amendments to NFA Compliance Rule 2-45 and its Related Interpretive Notice

As a result of the CFTC's recent changes to the Part 4 Requirements, a number of fund operators that were previously exempt from CPO registration have been required to register. Certain of these newly registered CPOs have funds that, in the normal course of business, regularly engage in transactions that have characteristics similar to a loan, but which NFA has determined are not the type of transactions that Compliance Rule 2-45 was intended to prohibit. Therefore, NFA amended the Rule and the Interpretive Notice to provide that a CPO operating a pool that is a registered investment company (RIC), business development company (BDC), exempt pursuant to CFTC Regulation 4.7 or 4.13(a)(3), excluded from registration pursuant to Section 3(c)(1) or 3(c)(7) of the Investment Company Act of 1940 or securities registered under the Securities Act of 1933 may, under certain circumstances, engage in certain specified transactions without violating the Rule. A full description of the specific circumstances and transactions is provided in the following Interpretive Notice: http://www.nfa.futures.org/nfamanual/NFAManual.aspx?RuleID=9062&Section=9. Briefly, the transactions include:
Questions regarding these amendments should be directed to Tracey Hunt, Associate Director, Compliance (thunt@nfa.futures.org or 312-781-1284) or Mary McHenry, Associate Director, Compliance (mmchenry@nfa.futures.org or 312-781-1420).
Posted by Fernando Guzmán Cavero at September 26, 2013 No comments:

Email ThisBlogThis!Share to TwitterShare to FacebookShare to Pinterest
Labels: NFA | Notice to Members.

Detroit Manager Seeks to Freeze Pension Plan Detroit's emergency manager wants to freeze the city's pension system for public workers, in light of evidence it was operated in an unsound manner for many years, contributing to the city's financial downfall.
Posted by Fernando Guzmán Cavero at September 26, 2013 No comments:

By Kate Gibson, MarketWatch
NEW YORK (MarketWatch) — U.S. stocks rose on Thursday, with the S&P 500 rebounding from its longest losing streak this year, as a larger-than-expected drop in jobless claims mostly overrode worries about a budget standoff on Capitol Hill.
“The strong jobs data were constructive, but we think it’s going to be a nervous period for risk assets. Washington is going to be driving the bus really for the next few weeks,” said Jim Russell, senior equity strategist for U.S. Bank Wealth Management.

There is “fear about a possible government shutdown and a very contentious debate is likely over the debt ceiling. If the past is any guide, this is going to be a food fight like no other, and it will not put America in the best light on the global stage,” Russell said.

But the likely volatility that comes with Wall Street reacting to headlines out of Washington does represent an opportunity for investors. “At the end of the day, you have to fund the government, you have to raise the debt ceiling, so if markets decline due to short-term issues, buy good quality names on sale,” Russell advised.

Equities came off session highs after House Speaker John Boehner said on Thursday that his party will push for a bill that will tie increasing the debt ceiling — and continue funding the government past Oct. 1 — to more cuts in federal spending. The comments by the Ohio Republican did not completely derail market gains as the S&P 500 rebounded from its longest stretch of losses since late December. Stocks got a second wind after Senate Majority Leader Harry Reid, D-Nev., said his chamber plans to have a stopgap budget bill finished by Sunday.

Stocks are not far from all time-highs “while being held hostage to the dysfunction in Washington,” said Art Hogan, market strategist at Lazard Capital Markets.

A strong opening came in response to near-term oversold conditions, Hogan said. “Although it hasn’t been deep, the sellout was long,” he said.

The Senate on Wednesday moved toward advancing a bill that would keep the government open after Monday without wiping out funding from the health-care law. Also Wednesday, Treasury Secretary Jacob Lew told Congress the Treasury will only have $30 billion in cash by Oct. 17, putting the nation on the brink of default.

Stocks had extended gains after a report from mortgage-buyer Freddie Mac put the average 30-year fixed-rate mortgage at 4.32% this week, with the rate the lowest since August. With mortgage rates backing off, “we’ll likely see any fence sitter get off to take advantage of the drop because it likely won’t last,” emailed Peter Boockvar, chief market strategist at the Lindsey Group LLC, of expectations that potential home buyers would move ahead of an anticipated rise in interest rates.

The Labor Department reported the number of new applications for unemployment benefits fell by 5,000 to 305,000 last week, with the number slightly below what economists had expected, but still above 300,000, “which is still an important line,” said Gaffney. “The labor sector isn’t going as well as we would like to see.”

Separate data had the U.S. economy growing an unrevised 2.5% in the second quarter, less than the 2.7% projected by economists surveyed by MarketWatch. But from Gaffney’s perspective the number “was actually good. “We thought it could tick to 2% or even below 2%,” he said.

Thursday’s session came with a number of Fed officials speaking. In Sweden, Jeffrey Lacker, president of the Federal Reserve Bank of Richmond, said the U.S. central bank will “face risks as it pursues its ‘exit strategy’ from recent unconventional policies.” Lacker is a nonvoting member of the Fed’s policy-making committee.

Participating on a panel in Germany, Fed Gov. Jeremy Stein, a voting member, said the U.S. central bank should develop a methodical approach to tapering by linking reduced asset purchases to the unemployment rate.

In Houghton, Mich., Minneapolis Fed President Narayana Kocherlakota, who votes next year, said the central bank should do “whatever it takes” to bolster the labor market. Read about Fed speakers reflecting taper discord.
Kansas City Fed President Esther George, a voting member, gives a speech on the U.S. economy in Denver in the evening.

“We think the Fed takes a back seat here for just a little while, and Washington becomes the point of focus. Later in the year, in October or December, the Fed comes back into focus as an investor issue,” said Russell.


Posted by Fernando Guzmán Cavero at September 26, 2013 No comments:


Government shutdown looms
Overseas markets are worried about a potential U.S. gov't shutdown. Bed Bath & Beyond reports after the bell, and the S&P 500 looks to snap a five-day losing streak that may depend on the latest estimate for second-quarter U.S. . Photo: AP


“We’re waiting for some directions to where to go from here. There is no point in worrying about the debt ceiling until we know what the implications are. We’ve been here before and it seemed like the market reaction in 2011 was a bit overdone,” said Peter Dixon, strategist at Commerzbank in London. “It has the potential to cause the markets to take a leg down, but until we have the full information, markets don’t want to move. If you sell now and nothing happens, you will just have to buy back into the market later at a higher price.”

“In addition we’re waiting for some definitive signals on where the economy is going,” he added and said recent upbeat data from Europe shouldn’t necessarily push the markets much higher from here because much of the good news is already priced in.

“I just don’t feel like there’s any appetite for a bull run right now. But who knows, once we start to move into the third-quarter earnings season,” he said.

Shares of Ladbrokes PLC UK:LAD -7.60%  posted the biggest drop in the index, off 7.6%, after the betting firm said 2013 operating profit for its digital division will fall below current market expectations.

“Our digital earnings have been disappointing, reflecting a lack of competitiveness in sportsbook, lower margins than planned and a greater disruptive impact than expected from the transition necessary to grow digital for the long term,” Chief Executive Richard Glynn said in a statement.

On a more upbeat note, shares of Hennes & Mauritz AB SE:HMB +6.75%  gained 6.7% after the Swedish fashion retailer reported a 22% rise in third-quarter profit and said sales in China had been particularly strong during the period.

More broadly, European stock markets briefly moved into positive territory in afternoon action after U.S. stocks opened higher on the back of upbeat jobless claims data. New applications for unemployment benefits fell by 5,000 last week to 305,000, beating expectations of a 327,000 print. Meanwhile, the Commerce Department said the U.S. economy grew by 2.5% in the second quarter, unchanged from a previous estimate.

The data came as U.S. lawmakers struggle to agree on a budget before the new fiscal year begins next week, with a failure to pass the bill possibly leading to a government shutdown. Read: What’s next in the government shutdown saga
On Wednesday, the Senate took the first of several procedural votes to enact funding for the fiscal year, agreeing unanimously to debate a bill passed by the House that would remove funding of the 2010 Affordable Care Act. Democrats in the Senate aim to replace that bill with a stopgap measure that will maintain funding.

Additionally, Treasury Secretary Jacob Lew told legislators that he’ll run out of options to avoid hitting or surpassing the debt limit by Oct. 17 or sooner. Moody’s Investors Service warned on Tuesday that a failure to raise the debt limit would result in a worse outcome for financial markets than a government shutdown. The ratings agency argued that market participants would view a decision not to raise the debt limit as having a higher probability of sovereign default.

“The main risk to the U.S. economic outlook remains political. Our baseline outlook is that policy makers continue to avoid the government shutdown or interruption of debt payments that serve as threat points in the ongoing fiscal brinkmanship in the U.S. capitol,” analysts at Barclays said in a note.

“But the perpetual conflict and political discord of recent years has led to increased uncertainty, sizable fiscal drags in the resolution (e.g., sequestration), and temporary market disruptions. In other words, recent experience tells us the risk need not be fully realized in order to affect financial markets; walking close enough to the edge is sufficient,” they added.

In Europe, the instability in the Italian political system was back in the spotlight. Supporters of Silvio Berlusconi late Wednesday threatened to leave parliament if the former prime minister is ousted from senate due to a tax-fraud conviction, prompting a rebuke from President Giorgio Napolitano. The President on Thursday reportedly accused the Berlusconi supporters of undermining Italy’s parliamentary system and said the threat—if carried out—could pressure him into dissolving parliament. 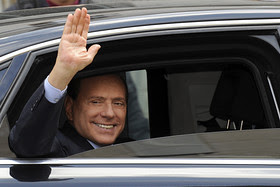 Outside the major indexes, shares of Vestas Wind Systems AS DK:VWS +7.86%  gained 7.9% after the wind-turbine maker said it has received a 400MW order in the U.S.

Shares of Mapfre SA ES:MAP -3.09%  lost 3.1% in Madrid after Bankia SA ES:BKIA +0.97% completed the sale of a 12% stake in the insurance firm. Bankia shares rose 1%.
Sara Sjolin is a MarketWatch reporter based in London. Follow her on Twitter @sarasjolin.
Posted by Fernando Guzmán Cavero at September 26, 2013 No comments:

Email ThisBlogThis!Share to TwitterShare to FacebookShare to Pinterest
Labels: European Markets at Close Report by MarketWatch.