Verizon Set for $49 Billion Debt Sale Verizon Communications prepared to sell $49 billion worth of bonds on Wednesday in what would be the largest investment grade corporate bond sale ever, trumping the previous record set by Apple's $17 billion bond sale in April.
at September 11, 2013 No comments:

President Barack Obama’s decision to delay military action against Syria eased concerns, yet the issue remained on the back burner. “If something were to go wrong, we would be back to focusing on Syria,” said Peter Cardillo, chief market economist at Rockwell Global Capital

Erasing losses and extending gains into a seventh session, the S&P 500 index SPX +0.31% added 5.14 points, or 0.3%, to end at 1,689.13, with consumer staples the best performing of its 10 major industry groups.
The Nasdaq Composite COMP -0.11% lost 4.01 points, or 0.1%, to 3,725.01.
The Dow Jones Industrial Average DJIA +0.89% rose 135.54 points, or 0.9%, to 15,326.60, with International Business Machines Corp. IBM +2.20% pacing blue-chip gains, up 2.2%, a day after agreeing to sell its customer care outsourcing business for $505 million to Synnex Corp. SNX +20.07% .
Unlike the S&P and the Nasdaq, the Dow does not include Apple AAPL +0.33% , shares of which fell 5.4% a day after the consumer-technology company announced two new models, with analysts criticizing the cost of its lower-priced iPhone, saying it would prove too pricey to succeed in emerging markets.
At the start of Wednesday’s session, Apple’s weighting in the Nasdaq Composite was 8.3%, making its impact the largest of its components, according to Nasdaq OMX.

Verizon Communications Inc. VZ +0.00%  gained 0.1% after the telecommunications giant and Dow component launched the biggest corporate bond sale on record, selling as much as $49 billion in bonds to help finance its $130 billion purchase of Vodafone Group PLC’s UK:VOD +1.08%   VOD +0.50%  stake in Verizon Wireless.

In an address from Washington Tuesday night, President Barack Obama said he was putting off a request that Congress authorize U.S. strikes targeting the Syrian regime after a deadly chemical-weapons attack last month. Obama said his administration will pursue a Russian proposal for Syria to turn over its chemical weapons to the international community. 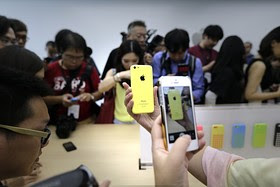 Reuters
A new yellow iPhone 5C at Apple’s event in Beijing.
“The diplomatic pause by the U.S. is bullish for risk-based assets including stocks, but the risk of unusual or unexpected twists in the process remain, as suggested last night by President Obama,” Dickson added.
The yield on the 10-year Treasury note 10_YEAR +0.07% used in determining mortgage rates and other consumer loans fell 6 basis points to 2.908%, while the dollar DXY -0.04%  fell against other currencies.

Markets offered little reaction to Commerce-Department data showing wholesale inventories and sales both rose 0.1% in July.
Kate Gibson is a reporter for MarketWatch, based in New York.
at September 11, 2013 No comments:


The Dow Jones Industrial Average soared 135.54 points to finish at 153,26.60, logging a three-day win streak, boosted by IBM and Disney.

Among the key SandP sectors, health care and consumer staples led the gainers, while utilities slipped.


Investors will be looking ahead to next week's Federal Open Market Committee meeting amid expectations that the central bank could announce a tapering of its bond-buying program.

"The Fed may still be quite dovish and give the market a taper that's on the lighter side—the consensus is around $10 billion," said Quincy Krosby, market strategist at Prudential Financial. "If the Fed comes in with something much stronger than what the markets anticipate, you're going to see Treasury yield climb and that could create a bit of uncertainty in the equity market."

President Obama addressed the nation in a televised speech from the White House on Tuesday evening, saying he would work with allies to force Syria to hand over its chemical weapons. His comments came after Damascus accepted Moscow's proposal to hand over its weapon stockpile in a bid to avoid a U.S.-led attack. Obama voiced skepticism the strategy would work, however, and urged war-weary Americans to support the use of military force if necessary.

Apple tumbled more than 5 percent a day after the tech giant unveiled two new iPhones. Disappointment over the pricing of the lower-costing iPhone 5C weighed on the company's shares, according to market watchers who said the price tag may be too high and may limit sales in key emerging markets.

BofA Merrill and Credit Suisse cut their ratings on the stock to "neutral," while at least four brokerages lifted their price targets.
(Read more: Would you buy the new low cost iPhone?)

Morgan Stanley edged higher after UBS upgraded the bank to a "buy" rating with a $33 price target, citing its increasingly wealth management-driven business model. Meanwhile, the brokerage downgraded BlackRock to a "neutral" rating, with a $280 target.

Verizon Communications officially launched a massive bond sale, offering $49 billion worth of debt in the biggest-ever corporate issue on record. The deal tops Apple's previous record of a $17-billion offering back in May. The telecoms giant will use the proceeds to replace a bridge loan used to finance its acquisition of Vodafone's stake in Verizon Wireless.

On the economic front, mortgage applications tumbled last week as rates hit their highest for the year, with refinancing activity dropping to its lowest in more than four years, according to the Mortgage Bankers Association.


Wholesale inventories ticked up 0.1 percent in July, according to the Commerce Department, after slipping 0.2 percent in June. Economists polled by Reuters had expected a gain of 0.3 percent.
The government auctioned $21 billion in 10-year notes with a high yield of 2.946 percent. The bid-to-cover ratio, an indicator of demand, was 2.86, compared to a recent average of 2.73.


"Bottom line, outside of Syria, we know the most important short term focus of the market is next week's FOMC meeting and we will likely get a taper but only $10 billion to $15 billion," said Peter Boockvar, managing director at The Lindsey Group. "At this reduced level, the sharp increase in interest rates over the past few months I continue to believe has priced in this Fed move and this good auction result today reflects that. This said, the QE taper is out of the bag and Treasury rallies should be sold."

The Treasury is set to auction $13 billion in 30-year bonds on Thursday.