RTAmerica September 03, 2013: AT&T partners with DEA to spy on Americans.

RTAmerica·
Posted by Fernando Guzmán Cavero at September 03, 2013 No comments:

RTAmerica
Posted by Fernando Guzmán Cavero at September 03, 2013 No comments:

Email ThisBlogThis!Share to TwitterShare to FacebookShare to Pinterest
Labels: RTAmerica
Posted by Fernando Guzmán Cavero at September 03, 2013 No comments:

For Microsoft, Nokia Deal Was Long and Arduous The prospect of Nokia shedding its core business - the longtime pride of Finland - weighed heavily on the potential deal.
Posted by Fernando Guzmán Cavero at September 03, 2013 No comments:

By Kate Gibson, MarketWatch
NEW YORK (MarketWatch) — U.S. stocks rose modestly on Tuesday after upbeat data on global manufacturing and as the White House lobbied Congress for a U.S. military response to Syria’s use of chemical weapons.

“We’re looking at two days of trading wrapped into one. This morning we caught up with what world markets had done in our absence, the pent-up celebration of economic data out of Europe and Asia,” Art Hogan, market strategist at Lazard Capital Markets, said of the morning jump that had the Dow industrials DJIA +0.16%  rising 123 points.


But stock indexes significantly cut their gains as President Barack Obama called for a quick congressional vote on his proposal for limited U.S. military action against Syria.

Microsoft shares fell 4.6% after the Dow component and software giant agreed to pay $7.2 billion for Nokia Corp.’s NOK +0.20%  main handset business. Nokia’s Stephen Elop will return to the U.S. firm as head of its wireless-devices business amid talk he could replace Microsoft’s retiring CEO Steve Ballmer. Shares of Nokia rallied 31%. 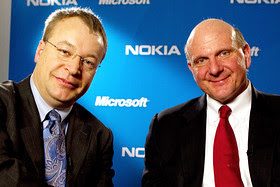 Bloomberg
Stephen Elop, CEO of Nokia, (left) and Steve Ballmer, CEO of Microsoft Corp.
Up for a third session in four, the S&P 500 index SPX +0.42%  climbed 6.80 points, or 0.4%, to 1,639.77, with consumer discretionary leading sector gains and telecommunications the poorest performer.
CBS Corp. CBS -0.06%  rallied 4.7% and Time Warner Cable Inc. TWC -0.13%  gained 1.8% after the network and cable operator reached agreement ending a month-long blackout of CBS and other channels in major cities.

Composite volume approached 3.7 billion. Read how trading volume has fallen to a 15-year low.
The yield on the 10-year Treasury note 10_YEAR +0.04% used in determining mortgage rates and other consumer loans rose 7 basis points to 2.856%.

“In general, markets go down until the missiles fly and then rebound,” noted Hogan from Lazard Capital Markets.

“We’re more worried about Syria. The markets reacted very well to economic data out of China and Europe over the weekend and yesterday, and our data was pretty good as well, but it looks like we started fading from early gains as Obama was talking about his goals for Syria,” said Paul Nolte, managing director at Dearborn Partners.

“It hasn’t gone well for us in that region,” said Nolte of U.S. military intervention in the Middle East.
Speaking Tuesday during a meeting with congressional leaders at the White House, Obama called on lawmakers to promptly weigh in on a U.S. response to Syria’s use of chemical weapons that killed more than 1,400 civilians last month. House Speaker John Boehner voiced support for Obama’s request, with the Ohio Republican saying “the use of these weapons has to be responded to and only the U.S. has the capability.”

The debate over the U.S. response to the attack in a Damascus suburb two weeks ago overshadowed better-than-expected economic reports.

The Institute for Supply Management’s manufacturing index rose to 55.7 in August from 55.4, illustrating its most rapid expansion in more than two years.
A separate report had construction spending rising 0.6% in July, with both better than expected.
“We’re looking at an economy that is continuing to do reasonably well, and it looks as though we’ll see tapering with the September meeting,” said Nolte of the Federal Open Market Committee gathering on Sept. 17-18.

Thoughts of the Federal Reserve scaling back its $85 billion in monthly bond purchases “is still causing stocks to be volatile, and certainly bonds are, but as we go through time, stock investors are getting more comfortable with it,” Nolte added.

Global stocks climbed on Monday, a U.S. holiday, after reports had Chinese manufacturing rising in August and euro-area factory production expanding at a more rapid pace than first estimated in August.

Wall Street on Friday capped its worst month since May 2012 as investors considered a possible U.S. strike against Syria.

Stocks finished the first trading session of September in the black, thanks to a handful of upbeat economic reports, but ongoing worries over Syria kept a lid on gains.
"The possible escalation of unrest in Syria adds uncertainty to a short-term investment outlook already muddied by talk of a shift in Fed policy and turmoil in Egypt," wrote Sameer Samana, international strategist at Wells Fargo Advisors. "Along with the Federal Reserve's stated intention to start tapering bond purchases in the near future, this additional headwind may lead markets to tread water in the near-term."
(Read more: Watch Art Cashin: Two reasons stocks faltered)

The Dow Jones Industrial Average squeezed out a small gain, led by United Technologies. Earlier, the Dow component rallied more than 120 points before reversing its gains. Microsoft led the laggards. The blue-chip index swung in a wide 155-point range.
The SandP 500 and the Nasdaq also ended in positive territory. The CBOE Volatility Index (VIX), widely considered the best gauge of fear in the market, traded near 17.
Among key SandP sectors, consumer discretionary and financials closed higher, while telecoms lagged.
(Read more: As markets fall, investors run ... toward risk?)
Marc Faber: Why a correction is coming soon
Find out why Marc Faber thinks the S&P is about to correct, with CNBC's Jackie DeAngelis and the Futures Now Traders.
"The market got oversold last week and it needs to rally back some, but we won't see any gains as long as we have this overhang of military action," said Keith Bliss, senior vice president at Cuttone & Co. During a meeting with congressional leaders at the White House, President Barack Obama called for a prompt vote on Capitol Hill and reiterated that the U.S. plan would be limited in scope and not repeat the long wars in Iraq and Afghanistan. House Speaker John Boehner said he would support Obama's call for military action in Syria and urged his colleagues in Congress to do the same. Stocks came off their highs in midday trading after Boehner's remarks. Nancy Pelosi, Democratic leader in the House of Representatives, said she believes Congress will support a resolution authorizing the use of U.S. military force against Syria. (Read more: If US bombs Syria,here's how high oil could go) Meanwhile, a Russian news agency reports that two "ballistic objects" had been launched towards the eastern Mediterranean revived concerns about a U.S.-led strike on Syria. Israel's Ministry of Defense confirmed that Israeli forces and the U.S. Missile Defense Agency had carried out a missile test and said Israel would release further information about the launch soon. Apple gained after the tech giant issued an official invitation for an event on Sept. 10. Analyst widely expect the company to unveil a new iPhone. On the M&A front, Verizon announced on Monday it will pay $130 billion to acquire Vodafone's 45-percent stake in their Verizon Wireless joint venture, marking the third-largest deal in corporate history. Vodafone's CEO told CNBC that he will use the cash earned from the deal to accelerate investment in Vodafone's own wireless networks, and to return $84 billion in cash and shares to shareholders. (Read more: Vodafone CEO: We will spend cash pile on our networks) "We are fortunate enough that the size of the deal itself allows us to return a large percentage to shareholders. But even the remaining 21 percent is large enough to strengthen the company and to allow us to accelerate our strategy," CEO Vittorio Colao said.

Microsoft said it will buy Nokia's handset business for $7.2 billion. Nokia CEO Stephen Elop, a former Microsoft executive, will rejoin the company and is now seen by some as a candidate to replace retiring CEO Steve Ballmer. Meanwhile, Time Warner Cable and CBS reached and agreement Monday, ending a month-long blackout, returning the broadcast network's programming to millions of subscribers in Los Angeles, New York and Dallas. CBS rallied to lead the S&P 500 gainers.  (Read more: Who really won the CBS-Time Warner Cable standoff) On the economic front, the manufacturing sector grew last month to 55.7 in August, its fastest pace in more than two years, according to the Institute for Supply Management. A reading above 50 indicates expansion in the sector. And construction spending gained 0.6 percent to an annual rate of $901 billion, according to the Commerce Department, topping expectations for a gain of 0.3 percent. The Japanese Nikkei led Asian stocks higher, after better-than-expected manufacturing data from Europe and China lifted hopes that a global economic recovery was in progress. Data out on Monday showed Chinese manufacturing hit a four-month high in August and euro zone factory activity rose at its fastest pace since May 2011. On Tuesday, data revealed that the U.K.'s construction sector expanded at its fastest pace in almost six years in August.
—By CNBC's JeeYeon Park (Follow JeeYeon on Twitter:

Stan Dibben, a winner of the World Sidecar Championship in 1953, recounts the thrills and perils of his profession.

How a Cabal Keeps Generics Scarce

By MARGARET CLAPP, MICHAEL A. RIE and PHILLIP L. ZWEIG 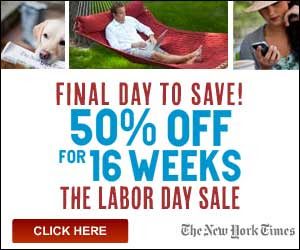 I was allegedly a novelist, a crime writer, no less, but I couldn't make stuff up.

Women in Philosophy? Do the Math

We don't need harassment to keep women and minorities from succeeding in philosophy - alienation, bias and outright discrimination will do the job.

Who Will Prosper in the New World

Who will prosper in the new, increasingly automated world?
ADVERTISEMENT

Debating the Case for Force

President Obama needs to explain why limited military strikes against Syria would be effective.

The Storm on New York's Horizon

In the race to succeed Mayor Bloomberg, the campaigns seem to be avoiding any talk of unpleasant budgetary realities.

The swallows have moved on yet again. How did they know it was time to leave?

How a Bookworm Broke a Hiking Record

A deeper look at Heather Anderson's record-shattering hike from Mexico to Canada. Readers are invited to comment on this post or on Nicholas Kristof's column.

A weekend in the life of armed America.

If last week Israelis seemed panicky, this week they seem dissatisfied that military action against Syria has been postponed.
Posted by Fernando Guzmán Cavero at September 03, 2013 No comments: