Email ThisBlogThis!Share to TwitterShare to FacebookShare to Pinterest
Labels: AlJazeera Reports on Perú.

Week in Review: S.E.C. Pushes to Fix Market Flaws A barrage of bad trades from Goldman Sachs and pricing paralysis on Nasdaq is spurring regulators to push ahead on new safeguards. The Securities and Exchange Commission's chairwoman, Mary Jo White, said that she would "shortly convene a meeting of the leaders of the exchanges" to push ahead on new testing requirements that have been rebuffed by exchange companies.
A look back on our reporting of the past week's highs and lows in finance.

Nasdaq Chief Defends Handling of Trading Halt As the Nasdaq opened without a hitch on Friday, Robert Greifeld said that the market operator needed to work on its "defensive driving" to deal better with mistakes by others.

Pricing Problem Suspends Nasdaq for Three Hours The United States stock market showed again on Thursday that it remained vulnerable to technological breakdowns.
News Analysis: In Markets' Tuned-Up Machinery, Stubborn Ghosts Remain Today's automated stock exchanges are fast and efficient, so long as the computers are working. When things go awry, chaos can emerge quickly.
Big Name Is Leaving Boies's Firm After a Year David M. Bernick will move from Boies Schiller and Flexner, headed by David Boies, to the Dechert firm, a transition that reflects a developing era of free agency in the once-stable world of corporate law.
Moody's Threatens to Cut Credit Ratings of Banks If it follows through, Moody's Investors Service could reduce the ratings of Wall Street giants like Goldman Sachs, Morgan Stanley and JPMorgan Chase as much as two grades.
New York Banker Arrested on Rape Charges in East Hampton Jason Lee, a managing director at Goldman Sachs, was accused of sexually assaulting a young woman at a home that he and his wife had rented for the month.
New Claims in U.S. Case Against SAC Ex-Trader An updated indictment in the federal case against a former SAC Capital Advisors portfolio manager claims that he received secret information about drug trials from a second doctor.

Bloomberg to Increase Oversight After Privacy Lapses Two separate but related reports found that the company's journalists had access to information about clients through a number of channels that those clients did not know about.
Ackman Acknowledges 'Mistakes' in Letter to Investors William A. Ackman sounds a note of contrition in a letter to shareholders, saying that his firm's investment in J.C. Penney has been a "failure."
Fed Appeals Rejection of Rule on Debit Card Fees The appeal will test the courts' power to overturn the financial regulations that stemmed from the banking overhaul after the financial crisis.

Currency Volatility Is Unnerving Investors The experiences in many emerging markets are the flip side of the economic situation in the United States, where the economic data has recently been improving.
Many Wall St. Banks Woo Children of Chinese Leaders For more than a decade, Wall Street's biggest banks have hired the sons and daughters of senior Chinese government officials in the hopes that they can open doors and secure deals in China.
Barnes & Noble's Chairman Drops Plan to Buy Its Bookstores The move raises further questions about the bookseller's future amid its previously announced plans to stop making its Nook line of tablets.

Falcone to Admit to Wrongdoing as S.E.C. Takes a Harder Line Philip A. Falcone, who was accused of manipulating the market, has also agreed in a settlement to be banned from the securities industry for at least five years.
Obama Presses for Action on Bank Rules Administration officials and some lawmakers have expressed frustration that critical parts of President Obama's financial overhaul, the Dodd-Frank act, remain unenforced.
DealBook Column: Hiring the Well-Connected Isn't Always a Scandal In financial firms, does hiring the children of the elite constitute bribes? Hardly, says Andrew Ross Sorkin.
Banks Fall Short of Planning for the Worst, Fed Finds The Federal Reserve described significant shortcomings in large banks' responses to so-called stress tests, which aim to ensure that they can withstand economic shocks.
Statoil Sells North Sea Assets to Austrian Rival Statoil, Norway's state-controlled oil company, said on Monday that it would sell a package of North Sea assets to OMV, a smaller Austrian producer, for $2.65 billion.
Oversight Board Faults Broker-Dealer Audits The Public Company Accounting Oversight Board found deficiencies in some audits of brokerage firms.
Prosecutor in Enron Case Expected to Be Named to Justice Dept. Post The Justice Department is expected to name Leslie R. Caldwell, the former lead prosecutor in the Enron case, as the next head of its criminal division.
To Cover New York, Zillow Buys a Rival Site The real estate Web site Zillow will acquire StreetEasy, a much smaller site, for about $50 million to patch what it described as a "glaring hole" in its coverage.

Public Funds Take Control of Assets, Dodging Wall Street The shift is motivated, in no small part, by the high fees and lackluster performance that many hedge funds and private equity firms have delivered to their biggest clients in recent years.

Hiring in China by JPMorgan Under Scrutiny Authorities have opened a bribery investigation into whether JPMorgan Chase hired the children of powerful Chinese officials to help the bank win lucrative business in the booming nation.
DEALBOOK »

Two Market Operators, BATS and Direct Edge, Said to Be in Talks to Merge BATS Global Markets and Direct Edge are in talks to merge, potentially creating one of the biggest stock market operators in the country, a person briefed on the matter told DealBook on Friday.
Dutch Bank ABN Amro Takes Step Toward an I.P.O. The announcement comes five years after the Dutch government bailed out ABN Amro after a consortium of European banks acquired the firm for around 72.2 billion euros, or $99 billion.
Ballmer's Greatest Hits and Misses as Microsoft's Chief Deal Maker Steven Ballmer, as the chief of Microsft, led one of the most prolific deal-making streaks in technology over the past two decades. But his record is as notable for its misses as its hits.
Breakingviews: Next Microsoft Chief Should Pare the Menu Whoever becomes the next chief executive of Microsoft should narrow the company's focus, says Robert Cyran.
Bank of America to Review Intern Working Conditions Bank of America announced on Friday that it was reviewing the working conditions of its junior employees after a 21-year-old intern died recently in London.
Slice, a Shopping Tracking Service, Raises $23 Million Slice, a start-up whose service tracks consumers' online purchases, said on Friday that it had raised $23 million in its latest round of financing. The investment was led by Rakuten, the big Japanese e-commerce company.
Alibaba Said to Push to Allow Partners to Nominate Board Members The Chinese e-commerce giant, which analysts expect could be valued at $100 billion or more in an initial public offering, has made a proposal to allow top executives to retain control over corporate strategy, according to a person with knowledge of the matter.

'Cups' "You're gonna miss me when I'm gone," sings Anna Kendrick. Even if it's only for three hours. 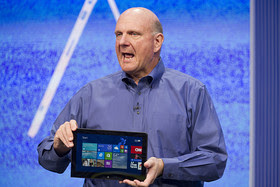 Bloomberg
Microsoft’s Steve Ballmer says he will step down as CEO within 12 months.
Earlier in the morning, stocks faced headwinds from the release of new-home sales data, which was much weaker than expected.
But as investors digested the housing data, stocks started clawing their way back into positive territory, likely treating the poor numbers as an argument for delaying tapering of the Federal Reserve’s asset purchases.
Two Fed officials offered mixed comments in CNBC interviews from the Fed’s conference near Jackson Hole, Wyo., early Friday, with Atlanta Fed Bank President Dennis Lockhart backing a September taper with a caveat, and St. Louis Fed President James Bullard saying there’s no reason to hurry the taper, which refers to the central bank’s much-anticipated reduction in its bond buys. Follow our streaming coverage.
The market latched onto this uncertainty and treated the housing data as another data point to support a delay of tapering, said Mark Luschini, chief investment strategist at Janney Montgomery Scott.
“To the extent they haven’t made their minds up, this is a data point you have to chalk up to deferring tapering for now,” Luschini said.

The key issue at Jackson Hole, which runs until Saturday, is the looming question of whether Larry Summers or Fed Vice Chair Janet Yellen will replace Bernanke. Here are five speakers to pay attention to at the conference. Also: 5 things Ben Bernanke could do in his next life
Advancing stocks outpaced decliners by 2 to 1 on the New York Stock Exchange, while advancers edged out decliners slightly on the Nasdaq. Composite volume topped 2.5 billion shares for NYSE-listed stocks and about 1.5 billion shares for Nasdaq-listed stocks by the close.
In addition, investors were taking in upbeat German and U.K. GDP data, as well as Nasdaq OMX Group Inc.’s NDAQ +1.21% CEO saying he’s dedicated to improving the exchange’s performance after Thursday’s three-hour trading halt.
Nasdaq CEO Robert Greifeld on Friday said the exchange was “deeply disappointed with what happened yesterday.” Speaking in an interview with CNBC, Greifeld said the Nasdaq had handled the trading problem “in a logical and organized way.”


In a statement after the close Thursday, Nasdaq OMX said most of the shutdown was spent figuring out the market reopen, rather than dealing with technical problems. Actual issues were resolved within 30 minutes, but planning time was needed “to ensure an orderly reopening of trading.” Then on Friday, Nasdaq said there was no evidence that the halt was a result of hacking. Also read: Nasdaq outage a “black squirrel event.”
On the corporate front, shares of Pandora Media Inc. P -0.48% closed down 13% after the streaming-music provider gave a weaker-than-expected earnings outlook late Thursday.
Shares of Aéropostale Inc. ARO +0.23% tumbled 20% after the teen-apparel retailer reported weak earnings and a sour third-quarter outlook. A day earlier saw disastrous results from Abercrombie & Fitch Co. ANF +0.39% .
In Asia, the Nikkei Stock Average JP:NIK +2.21% rallied 2.2% as the yen weakened against the dollar, but Chinese stocks retreated over concerns about liquidity. European stocks moved higher Friday after earlier getting no lift from German growth data, which showed a rebound in the second quarter. U.K. stocks were up after an upward revision for second-quarter GDP growth in that country.
Crude oil and gold prices also settled higher on the day.
Wallace Witkowski is a MarketWatch news editor in San Francisco. Follow him on Twitter @wmwitkowski. Victor Reklaitis is a New York-based markets writer for MarketWatch. Follow him on Twitter @VicRek. Barbara Kollmeyer contributed to this report.
at August 23, 2013 No comments: