Barnes & Noble Chairman Drops Bid to Buy Its Bookstores The move raises further questions about the bookseller's future amid its previously announced plans to stop making its Nook line of tablets.
at August 20, 2013 No comments:

“There are mixed signals coming into the market right now. Any week that you have Fed minutes being released, the market is going to go on pause until you get the minutes,” Chris Gaffney, senior market strategist at EverBank Financial, said of Wednesday’s release of minutes from the Federal Open Market Committee’s July 30-31 gathering.

Specifically, investors will be looking for clues as to when the Federal Reserve might cut the pace of its $85 billion in monthly bond purchases. The asset buying is viewed as aiding the S&P 500’s more than 150% rise from its bear-market low in 2009, with the index hitting a record on Aug. 2, then declining nearly 4% through Monday. 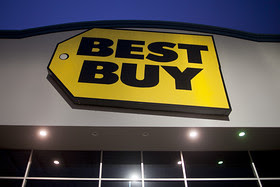 Bloomberg Image
Best Buy rallies after quarterly sales top targets.
“Just how serious is the Fed about pulling back on the bond buying in September? Our own St. Louis Fed head has been warning you don’t want to pull back on those purchases too quickly, and he’s usually a big inflation hawk,” said Gaffney, who believes that while markets are pricing in a September move, it’s more likely to come in December.
“I do think [Fed Chairman Ben] Bernanke wants to start the taper on his watch, and with him leaving in January, I think it’s going to start in December,” he added.
Gaining after its longest down streak this year, the S&P 500 index SPX +0.38%  climbed 6.29 points, or 0.4%, to 1,652.35, with consumer discretionary and financials pacing sector gains.

“One surprise is the lack of big movement in crude-oil prices in recent days given the trouble in Egypt and growing threats that an unstable government might change priority patterns for U.S. and Western Europe ships passing through the very crowded Suez Canal,” noted Dickson.

“It’s the result of all the oil we’ve found in the United States; the U.S. has become more self-sufficient,” offered Gaffney of the less-volatile oil market.

J.C. Penney Co. Inc. JCP +5.98%  added 6% after the department-store chain tallied second-quarter sales that declined at a slower pace than the prior year. Bloomberg News on Tuesday reported that J. Kyle Bass, founder of Hayman Capital Management LP, has built up a long position in the retailer. The report cited a person familiar with the matter.
Zillow Inc. Z -4.76%  fell nearly 5% after the real-estate website said it would sell $411.9 million in shares.

Economic reports this week include one Wednesday on the sale of existing homes in July, followed by another on weekly jobless claims scheduled for release on Thursday.

Kate Gibson is a reporter for MarketWatch, based in New York.
at August 20, 2013 No comments:

Stocks eased off their highs in the final minutes of trading to close narrowly mixed Tuesday, with the Dow logging its fifth-straight day lower. But losses were limited as handful of retailers and as bond yields receded from two-year highs.
Investors also awaited further indications over the timing of the Federal Reserve's widely expected reduction in asset purchases.

The Dow Jones Industrial Average turned lower in the final minutes of trading to finish in the red for the fifth-straight day. Home Depot led the blue-chip laggards.

The S&P 500 and the Nasdaq finished higher. The CBOE Volatility Index (VIX), widely considered the best gauge of fear in the market, finished below 15.


Among key S&P sectors, consumer discretionary and financials led the gainers, while consumer staples finished slightly lower.
Closing Bell Exchange
With tapering looming, Tom Karsten, Karsten Advisors; Bill Stone, PNC Asset Management Group; Vince Lowry, Revenue Shares; and CNBC's Rick Santelli provide insight on the markets going into the fall.
With no major economic news, investors have been focusing on when the Federal Reserve will start scaling back stimulus effort. The yield on the 10-year Treasury note slipped near 2.83 percent after hitting a fresh two-year high of 2.90 percent on Monday. "If you buy bond funds now, you're guaranteed to lose money whereas if you buy stocks, you still have a chance to make money," said Dan Veru, CIO of Palisade Capital Management. "We're going through this adjustment period of rates coming back up and that process can sometimes create headwinds for the market. And given we had no significant pullbacks for the market this year, we could be vulnerable to some setbacks." Global markets took a hit from worries about reduced Fed stimulus. European markets were lower across the board. In Asia, emerging market stocks extended their sharp losses. Indonesia's Jakarta Composite fell nearly 5 percent, placing it in bear market territory, having lost approximately 22 percent from May's all-time record high. And Thailand's benchmark SET Index dropped nearly 3 percent. (Read more: First India, then Indonesia... who is next?) Japan's Nikkei closed at a near two-month low and China's Shanghai Composite fell 0.6 percent. "The market did an excellent job of ignoring the overseas market damage this morning," wrote Elliot Spar, market strategist at Stifel Nicolaus. "If the market can have strong close today, my upside target is the gap at 1,685 on the S&P. We really don't want to get there too fast. Many damaged sectors and names need time to repair themselves. A rally in the S&P back to the recent high at 1,709 that is accompanied by numerous negative divergences would not be healthy for the market."

Meanwhile, several retailers bucked the recent downbeat earnings trend. Best Buy surged to lead the S&P 500 gainers after the consumer electronics retailer easily topped Wall Street expectations. Urban Outfitters soared after the specialty retailer posted earnings that beat expectations. At least four brokerages lifted their price targets on the company. JCPenney posted sales that continued to fall sharply last quarter, but the troubled retailer said the back-to-school season has so far been "encouraging." The company also said sales trend had improved every month in the quarter. Shares traded higher. And Dow component Home Depot posted second quarter earnings that topped expectations and raise its full-year guidance, citing the rebounding housing market. (Read more: Cramer: Once hated,these retailers will go higher) Analog Devices and Intuit are among notable companies scheduled to post earnings after the closing bell. Apple dipped after S&P Capital IQ downgraded the iPhone maker to "buy" from "strong buy." S&P Capital IQ equity analyst Scott Kessler said the stock was nearing his target price of $550, and noted that it had already risen 30 percent off a low set on June 27. Sony will release its PlayStation 4 console on November 15 in North America. The company said pre-orders for the new console has already exceeded one million. Barclays declined after a U.S. appeals court said investors may revive a lawsuit that alleges the bank misled them about its subprime mortgage exposure.
—By CNBC's JeeYeon Park (Follow JeeYeon on Twitter: