Efforts to change the current system for financing the American dream of owning a home will be difficult, because Americans like inexpensive mortgage loans.
Posted by Fernando Guzmán Cavero at August 06, 2013 No comments:

Jan Skoyles, research director for The Real Asset Co. in London, summarizes her recent studies of the various components of what passes for the gold market. Skoyles concludes:
"The gold price is not determined by demand and supply of physical gold. Instead it has become the victim of a highly speculative paper market where financial instruments have been created to derive benefit from the inherent desire felt by investors to own, trade, and punt gold.
"The nature of gold demand is changing. As Eastern nations and emerging economies take their place on the global economic stage, their investment decisions will also make an impact on markets. These countries do not wish to hold these paper products when they can own physical gold instead."
Skoyles' commentary is headlined "The Nature of Gold Demand Is Changing" and it's posted at The Real Asset Co.'s Internet site here:

John Browne of Euro Pacific Capital, Peter Schiff's shop, today gets pretty explicit, seemingly for the first time, about surreptitious intervention in the gold market by central banks. If Schiff, predicting in his many television and radio appearances the collapse of the world financial system and the renaissance of gold, has ever acknowledged the possibility that the gold market may be less than free and transparent it has escaped GATA's notice. Does Browne's commentary signal a little more awareness in Schiff's thinking or does it signal that Browne's days at Euro Pacific are numbered? In any case his commentary is headlined "What's in the Vault?" and it's posted at GoldSeek here:
http://news.goldseek.com/JohnBrowne/1375807115.php
And at 24hGold here:
http://www.24hgold.com/english/news-gold-silver-what-s-in-the-vault-.asp...


2 Fed Presidents Hint Tapering of Stimulus Could Begin Next Month

Presidents of two Federal Reserve banks indicated that the end of qualitative easing might come in early fall — depending, of course, on how the economy fares.

RTAmerica August 06, 2013: Ex-Gitmo guard: We were told not to treat inmates as humans

»click here to see the latest top stories from CNBC.com
Posted by Fernando Guzmán Cavero at August 06, 2013 No comments:

By Kate Gibson, MarketWatch
NEW YORK (MarketWatch) — U.S. stocks extended losses into a second day Tuesday as Federal Reserve official Charles Evans said the economy should be able to shoulder reduced Fed asset purchases later this year.
“It’s more of this taper tempest that we seem to go into. The market gets a little confused; it seems fine as long as the talk around taper is around data, but it gets flustered when you talk about the calendar,” said Jim Dunigan, managing executive for investments at PNC Wealth Management. 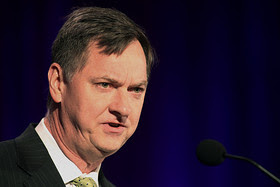 Stock bargains are growing scarcer. One way to find relative bargains is to search among companies that have lagged behind the market’s recent rally, but which look likely to catch up in coming quarters. Jack Hough of Barron's has details. Photo: Getty Images.


“If exports are improving, things in Europe seem to be getting better, so maybe it’s coming out of recession, and maybe China isn’t as bad as the headlines would suggest,” said PNC’s Dunigan.

Evans, president of the Chicago Fed, expects growth in the second half of the year to pick up to an annual rate of 2.5% and climb above 3% next year. The central bank could then taper its asset purchases in several stages, and likely end them by mid-2014, said Evans, who is a voting member of the Federal Open Market Committee.
“We will hear more of this type of talk from Fed members as they do their verbal best to soften the market impact of a growing likelihood of a fall taper,” emailed Peter Boockvar, chief market analyst at the Lindsey Group
Evans spoke to reporters in Chicago after Dennis Lockhart, president of the Federal Reserve Bank of Atlanta, told Market News International the Fed could start curtailing its bond-buying program at any of the three remaining FOMC meetings this year.
U.S. stocks finished mostly lower on Monday after a better-than-expected report on services-sector growth and remarks by Dallas Fed Bank President Richard Fisher that the central bank is closer to tapering its bond purchases.
Kate Gibson is a reporter for MarketWatch, based in New York.
Posted by Fernando Guzmán Cavero at August 06, 2013 No comments:

Stocks closed near session lows Tuesday, with major averages logging their biggest declines since June, after two Federal Reserve President said the Fed could begin tapering its easy-money program as early as September.
"This week has been pretty slow so far, but whenever that word 'taper' is put out there, it scares the market," said Joe Bell, senior equities analyst with Schaeffer's Investment Research.
(Read more: Wien: Government should spend more and taper less)
The Dow Jones Industrial Average tumbled nearly 100 points, dragged by IBM and Hewlett-Packard.
The S&P 500 finished below its 1,700-mark and the Nasdaq snapped a five-day win streak. The CBOE Volatility Index (VIX), widely considered the best gauge of fear in the market, ended above 12.
All key S&P sectors closed in the red, led by materials and financials.
"You stay away from a dull market [because] there's very little money to be made," said Art Cashin, director of floor operations at UBS Financial Services. "You look for opportunity or news changes, so you need some volatility to inspire a little extra volume."

Where to invest now: Fulton
Susan Fulton, FBB Capital, shares the best places to put your money; including Qualcomm, PetSmart, and TJX.
Atlanta Fed president Dennis Lockhart said the initial taper in the central bank's asset purchase program could start at any of the three remaining Federal Open Market Committee meetings this year. Lockhart added he was not disappointed by the July unemployment report and said he'll be watching data closely for "the next few weeks" to see if the economy is on track for faster growth. Chicago Fed President Charles Evans also echoed Lockhart's earlier comments, saying the central bank will likely reduce its stimulus program later this year. Evans is typically among the most dovish policymakers. (Read more: Fed outlier! No taper before year-end: Strategist) The government auctioned $32 billion in 3-year notes at a high yield of 0.631 percent. The bid-to-cover ratio, an indicator of demand, was 3.21, versus a recent average of 3.44. Among earnings, Michael Kors spiked higher after the luxury retailer posted earnings that nearly doubled, thanks to gains in Europe and roll-out of shops within department stores. Fossil surged after the fashion accessory maker posted better-than-expected earnings and lifted its full-year outlook. Meanwhile, American Eagle Outfitters tumbled after the teen apparel retailer said its second-quarter profit will likely be less than half of what Wall Street was expecting, citing weak sales and lower margins. Rivals Abercrombie & Fitch and Aeropostale also declined. Disney, 21st Century Fox, Zillow and Office Max are among notable companies slated to post results after the closing bell. So far, nearly 85 percent of S&P 500 companies have reported results this quarter, with 67 percent of companies topping earnings expectations and 55 percent beating revenue forecasts, according to the latest data from Thomson Reuters. If all remaining companies report earnings in line with estimates, earnings will be up 4.3 percent from last year's second quarter. Bank of America traded lower after the U.S. Justice Department said it had filed a civil lawsuit against the financial giant for what government lawyers said was a fraud on investors involving $850 million of residential mortgage-backed securities. Washington Post soared after Amazon.com founder Jeff Bezos agreed to buy the publishing company's newspaper assets for $250 million. IBM slipped after Credit Suisse downgraded the tech giant to "underperform" from "neutral" and cut its price target on the Dow component to $175 from $200, saying organic growth would be challenging in the future. On the economic front, the U.S. trade deficit fell 22.4 percent to $34.2 billion in June, narrowing to its lowest level in more than 3-1/2 years, according to the Commerce Department. Economists polled by Reuters had expected the trade deficit to narrow to $43.5 billion.
In Europe, shares were slightly higher following reports that showed German industry orders beat forecasts in June to record their biggest rise since October and British manufacturing grew much more strongly than expected. The positive economic news pushed gold prices to a 2-1/2 week low to below $1,300 an ounce. Most gold miners including Yamana Gold and Iamgold tumbled sharply. Meanwhile Japan's benchmark index reversing earlier losses to rally 1 percent as the yen weakened, while the rest of Asian stocks were mixed in choppy trade. Australia's benchmark index was little changed after the Reserve Bank of Australia cut interest rates by 25 basis points to a record low of 2.5 percent, as widely expected. It marks the eighth rate cut since November 2011 when the central bank first acknowledged a growth slowdown as the country's decade-long mining boom began to fade.
—By CNBC's JeeYeon Park (Follow JeeYeon on Twitter: