Share this: Immigration reform means great things for the economy
Now that lawmakers in the Senate have come together to pass a bipartisan piece of legislation to fix our broken immigration system, it's up to the House of Representatives to do the same.
And that makes this the perfect time to learn more about the issue.
In the days ahead, those members of Congress have to make a choice about the right way to reform immigration -- or if they want to proceed at all. As the national debate begins in earnest, we want to make sure you have information you need to answer questions in your community.
So check out this video, then share it so that people know that immigration reform makes a ton of sense for the economy.

Email ThisBlogThis!Share to TwitterShare to FacebookShare to Pinterest
Labels: "The White House"; July 16, 2013 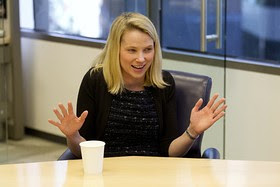 In an interview with Fox Business, Kansas City Fed President Esther George said the central bank should begin trimming its asset-buying program “sooner rather than later.”
“When you have all of this communication by various Fed members spouting different views in public, it creates confusion,” said Brad Sorensen, director of market and sector research at Charles Schwab.
“The Fed itself has been pretty consistent, but it has bungled a lot of messages they’ve tried to get out. Sometimes it’s better not to know how the sausage is made, there are always going to be disagreements among economists,” he added.
Esther’s hawkish comments came a day before Fed Chairman Ben Bernanke kicks off his semiannual testimony to Congress, with any hints the central bank is getting closer to tapering its monthly asset purchases likely to be scrutinized.
Bernanke “will likely repeat the latest version of the Fed’s new improved message that he presented during the Q&A following his speech last Wednesday,” Ed Yardeni, chief investment strategist at Yardeni Research Inc., wrote in emailed commentary, referring to the Fed chief’s statement that “highly accommodative monetary policy for the foreseeable future is what’s needed in the U.S. economy.”
Investors on Tuesday also considered economic data. A gauge of confidence among home builders jumped to a seven-year high in July, according to the National Association of Home Builders/Wells Fargo.
A report from the Labor Department had the consumer-price index rising 0.5% last month. The core CPI, which excludes food and energy costs, rose 0.2%.
Industrial production rose 0.3% in June, according to the Federal Reserve.
So long as the data support the Federal Reserve’s story of modest economic growth, the focus is on earnings, said Sorensen at Charles Schwab.
The S&P 500 on Monday extended a winning run to an eighth day, its longest stretch since January.
“The eight-day run gave investors ample time and opportunity to cash out of the market if they felt the eventual Fed change would push stocks down — but they didn’t,” said Howard Silverblatt, senior index analyst at S&P Dow Jones Indices.
“We’re building a stronger base, which we’ll still need to test, but one which will help support higher prices down the road,” Silverblatt added.
Kate Gibson is a reporter for MarketWatch, based in New York.
Posted by Fernando Guzmán Cavero at July 16, 2013 No comments:

Stocks closed lower Tuesday, with the S&P 500 breaking an 8-day rally, following a mixed batch of economic and earnings reports and as investors hesitated to jump in ahead of Fed Chairman Ben Bernanke's congressional testimony.
The Dow Jones Industrial Average closed in the red, dragged by by Coca-Cola and Walt Disney.

The S&P 500 and the Nasdaq snapped their 8-day win streak. The CBOE Volatility Index (VIX),
widely considered the best gauge of fear in the market, rose above 14.

Most key S&P sectors turned lower, led by energy and utilities.
Doug Kass: Market making a top here
Doug Kass believes that the bulls are ignoring major risks to the market. In fact, he says, stocks are currently making a high for the year, with CNBC's Jackie DeAngelis and the Futures Now Traders.
Dow component Coca-Cola matched analyst expectations of 63 cents a share in profit, but missed on the revenue end with $12.75 billion against expectations of $12.95 billion. Also, Goldman Sachs was the latest participant in the parade of big U.S. financial institutions to report blowout profits. The company reported earnings per share of $3.70, well ahead of the $2.82 estimates. Revenue also easily beat expectations, sending shares higher. (Read More: Enjoy it while itlasts: Bank earnings face trouble) Johnson & Johnson edged higher after the drugmaker topped expectations, thanks to strong sales of prescription drugs and medical devices, and lifted its full-year earnings forecast. Yahoo and CSX are among notable companies scheduled to post earnings after the closing bell. "We know earnings in the second quarter aren't going to be particularly good and we know GDP growth in the second quarter wasn't particularly good, but there's a fair bit of optimism built into the back half of the year and so from our standpoint, we're focused almost entirely on what companies had to say on the second half of the year and what that means for stock prices," said Dan Greenhaus, chief global strategist at BTIG. Investors will be looking ahead to Fed Reserve Chairman Ben Bernanke's semi-annual testimony to Congress on Wednesday, from which they hope to garner further clues on the direction of monetary stimulus. "In recent weeks the message that he's given is that we have seen signs of improvements in the U.S. economy and we're going to move towards tapering. Then he gives us the message that we got last week, so I think markets will be cautious ahead of Bernanke's testimony," said Robert Rennie, global head of currency strategy at Westpac. Meanwhile, Kansas City Fed President Esther George said the central bank should begin to reduce its massive bond-buying program and bring it to a close "sometime in the first half of next year."
Dell declined after the tech company may delay by about a week a scheduled July 18 shareholder vote on a $24.4 billion buyout offer from founder Michael Dell and private equity firm Silver Lake, according to reports. Onyx Pharmaceuticals rallied after the biopharmaceutical company is expecting acquisition interest from nearly five parties including Amgen and Pfizer, according to reports. Tesla, which joined the Nadsaq 100 index on Monday, suffered its worst one-day decline since January 2012 following a bearish note from Goldman Sachs.  On the economic front, homebuilder confidence jumped in July to its strongest level since January 2006, according to the National Association of Home Builders. The NAHB/Wells Fargo Housing Market index rose to 57 from a revised 51 in June. Analysts polled by Reuters had projected the index likely held at its originally reported June level of 52. Most homebuilders including Beazer, KB Home and Toll Brothers turned higher following the report. Consumer price index gained 0.5 percent in June thanks to a gain in gasoline prices. Economists polled by Reuters had expected consumer inflation to increase 0.3 percent last month. Excluding food and energy costs, the core reading edged up 0.2 percent. And industrial production edged up 0.3 percent in June after an unchanged reading in May, according to the Federal Reserve. Economists polled by Reuters had expected a gain of 0.2 percent. Elsewhere, Japan's benchmark index hit a new seven-week high and as earnings season picked up. The Nikkei 225 hit its highest levels since May 24, and the yen weakened to the 100 handle against the U.S. dollar, after Japan's economics minister, Akira Amari, said the government will go ahead with a planned sales tax hike.
—By CNBC's JeeYeon Park (Follow JeeYeon on Twitter:

Declining inventories of gold and silver amid enduring bullish fundamentals make Sprott Asset Management's John Embry confident today that those markets are turning upward again. Embry is interviewed by King World News and an excerpt from the interview is posted here:

Email ThisBlogThis!Share to TwitterShare to FacebookShare to Pinterest
Labels: 2013., GATA I THE GATA DISPATCH; JULY 16 More than 70 employees of a corrugated box manufacturing plant in New Westminster who were laid off are claiming that the owner has hired ... READ MORE

PwC accepting nominations for Innovator of the Year award

B.C. manufacturing sales up in
May: StatsCan

Columbia River Treaty has Crown corporation on the hook for upgrades to a dam that produces no electricity
... READ MORE

The Conscience of a Liberal - The Paradox of Flexibility, by Paul Krugman: NYT Opinion Today; July 16, 2013.

The Truth About Trayvon

Ignore what the lawyers say. The case was always about race.

The state was too squeamish to put the dicey issue of race squarely before trial jurors.

By RACHEL LEARS and ROBIN BLOTNICK

An immigrant fights to change working conditions at a Manhattan Hot & Crusty bakery and cafe.

To shape characters, show us what drives them, tell us how they pine, reveal how they tick.

Egypt Shows How Political Islam Is at Odds With Democracy

The military takeover was necessary, if painful. Instead of governing, Morsi only tried to tighten this grip.

Pakistan and Egypt show that once the military is entrenched in power, it keeps democracy at bay.

Black Elites and the Draft Riots

How New York's African-American leadership dealt with, and suffered from, the violence of 1863.

I fast for Tisha B'av, but don't ask me why: Like many Jews, I don't know how to feel about Temple Mount.
ADVERTISEMENT

A Step to Majority Rule in the Senate

Democrats should proceed with banning the filibuster for executive-branch appointments.

President Obama's plan to bring electricity to millions of Africans is promising, but the outcome depends on how it is carried out and whether it is sustained.

Why is Fabrice Tourre, a former Goldman employee, the only person on trial for a 2007 scheme to defraud investors?

The Paradox of Flexibility

Cutting wages: not a good thing.

A day in the life of armed America.

Are there issues where the base needs to lose outright so that the party can win again?
Posted by Fernando Guzmán Cavero at July 16, 2013 No comments: