Email ThisBlogThis!Share to TwitterShare to FacebookShare to Pinterest
Labels: 2013., The Economist I New Selected Articles; July 15

By Kate Gibson, MarketWatch
NEW YORK (MarketWatch) — U.S. stocks climbed modestly on Monday, with the SaP 500 and the Dow industrials rising to record closing highs again, after Citigroup Inc. reported better-than-expected earnings.
The S&P 500 index SPX +0.14%  climbed 2.31 points, or 0.1%, to 1,682.50, rising for an eighth consecutive session, its longest run higher since an eight-session stretch that ended Jan. 25. It also marked another all-time finish, its 20th so far this year.
Analysts at Bank of America Merrill Lynch raised their 2013 year-end target for the SaP 500 to 1,750 from 1,600 previously.
Utilities paced sector gains Monday and telecommunications led the losses in the SaP 500. Citigroup’s C +1.97%  shares rose 2% after the banking giant reported a steep jump in second-quarter profit.
“It’s a big earnings week, but expectations are modest, so it’ll be interesting to see how companies perform with lowered expectations,” said Paul Mangus, head of equity research and strategy at Wells Fargo Private Bank.


A better-than-forecast manufacturing report helped neutralize worse-than-anticipated U.S. retail-sales data.
“We’re encouraged that the market is focusing on fundamentals again,” said Mangus added.
The Dow Jones Industrial Average DJIA +0.13%  rose 19.96 points, or 0.1%, to 15,484.26, a record closing high — its 26th this year.
Dow component Boeing Co. BA +3.72%  shares rose 3.7%, regaining a large chunk of Friday’s losses, after British investigators reportedly found no evidence that batteries caused a fire on one of the manufacturer’s 787 planes. Are Boeing shares immune to Dreamliner woes?
The Nasdaq Composite index COMP +0.21%  rose 7.41 points, or 0.2%, to 3,607.49.
More than 567 million shares traded on the New York Stock Exchange. Composite volume topped 2.57 billion.
Gold prices rose, with August futures GCQ3 +0.48%  rising 0.5% to end at $1,283.50 an ounce on the Comex division of the New York Mercantile Exchange. The cost of crude also increased, with oil futures CLQ3 +0.43% rising 37 cents to $106.32 a barrel.
Crude’s spike has been “a fairly quick reaction to geopolitical events, so it may be a blip, only time will tell,” said Mangus at Wells Fargo, referring to recent turmoil in Egypt.
Economic data boost stock futures
U.S. stock futures gained ground as an upbeat economic report out of China helped put the market on track to extend its run to fresh highs.


Treasury yields fell, with the yield on the 10-year note 10_YEAR -1.39%  used in determining mortgage rates and other consumer loans at 2.55%.
The dollar DXY +0.13%  climbed against the currencies of major U.S. trading partners, including the Japanese yen USDJPY +0.47% .
U.S. stock-index futures had added slightly to gains after economic reports that had manufacturing in the New York region expanding to a five-month high in July and U.S. retail sales up 0.4% in June, advancing less than forecast.
“The consumer was a bit weaker than expected in the second quarter,” noted Dan Greenhaus, chief global strategist at BTIG LLC, in an email.
In light of the retail-sales report, “there is a very real possibility second quarter GDP will be less than 1% for the second time in the last three quarters,” Greenhaus said. Read a commentary piece: Is the economy getting close to contraction? 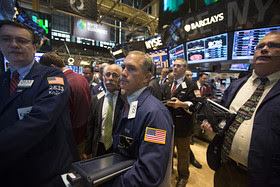 Bloomberg  Image
NYSE floor traders
The economy slowed somewhat in the second quarter relative to year-ago growth, intensifying the importance of corporate guidance as to what’s to come in the next two quarters and 2013, Wells Fargo‘s Mangus said.
Another economic report had U.S. business inventories rising 0.1% in May.
Both the Dow industrials and the S&P 500 climbed to record closes on Friday following upbeat earnings from two major banks and after Federal Reserve Chairman Ben Bernanke voiced support for continued monetary stimulus.
Bernanke is scheduled to testify about the U.S. economic and policy outlook before the House Financial Services panel on Wednesday, and before the Senate Banking Committee on Thursday.
“The interpretation of Mr. Bernanke’s comments will be important. It’s a matter of when, not if,” said Mangus of expectations that the Fed will start cutting back on its $85 billion in monthly bond purchases later this year or early in 2013.
Shares of Leap Wireless International Inc. LEAP +112.41%  soared after AT&T Inc. T -0.73%  late Friday said it would purchase the provider of prepaid-mobile services for $15 a share, or nearly $1.2 billion.
Kate Gibson is a reporter for MarketWatch, based in New York.
Posted by Fernando Guzmán Cavero at July 15, 2013 No comments:

Stocks finished modestly higher in lackluster trading Monday, with the Dow and S&P 500 closing at new highs for the third-straight session, as investors digested a handful of mixed economic data and ahead this week's slew of earnings reports.
"The second half is underway, and things are already looking encouraging," according to Sam Stovall, chief equity strategist at S&P Capital IQ. "Catalysts for the market's advance, as well as our own optimism, are found in our interpretation of historical precedents, economic projections, fundamental forecasts and technical considerations. So when describing our outlook for the second-half performance of U.S. equities, we borrow liberally from Herman's Hermits: 'Second verse, same as the first.' While we expect the trend to be the same, we think the magnitude of advance will be less, but the volatility will be greater."
The Dow Jones Industrial Average ended modestly higher, led by Boeing. The Dow is within 60 points from its all-time high of 15,542.40 hit on May 22.

The S&P 500 and the Nasdaq also finished slightly higher, posting their eighth-straight rally. The CBOE Volatility Index (VIX), widely considered the best gauge of fear in the market, closed below 14.

Among key S&P sectors, telecoms led the laggards, while utilities edged higher.
Best midsummer mid-caps
The Small Cap Russell 2000 Index is hitting another record high. Which mid-cap stocks are the best? Eric Marshall, Hodges Capital Management, and Brian Macauley, Hennessy Focus Fund, share their picks.
On the economic front, retail sales rose just 0.4 percent in June, according to the Commerce Department, missing expectations for a gain of 0.8 percent. It was still the third straight month of gains in sales and followed a revised 0.5 percent rise in May. Meanwhile, growth in New York state's manufacturing sector accelerated to 9.46 in July from 7.84 in June, according to the New York Federal Reserve. Economists surveyed by Reuters expected a reading of 5. A reading above zero indicates expansion. And U.S. business inventories ticked up 0.1 percent in May, according to the Commerce Department. Economists polled by Reuters had forecast inventories unchanged in May after a previously reported 0.3 percent gain. China's annual economic growth slowed to 7.5 percent in the second quarter of 2013, from 7.7 percent, marking the slowest pace of year-over-year growth since the third quarter of last year. Still, markets cheered the news as many traders expected a figure below 7.5 percent following the recent slew of disappointing trade and manufacturing data from the world's second-largest economy. (Read More: Chinese growth seems a bit too Goldilocks to some) The Shanghai Composite rallied 1 percent on the news, but gains across Asia were capped by light trading volumes, with Japanese markets shut for a public holiday.
Later this week, Federal Reserve chairman Ben Bernanke is expected to be on Capitol Hill for his annual testimony on the economy. Markets got a boost last week after Benrnanke said said monetary policy would remain accommodative for the foreseeable future, even if the unemployment rate hit the Fed's target of 6.5 percent. Stocks rallied sharply last week, with the Dow and S&P finishing at fresh highs. The S&P and Nasdaq posted their second best weekly gains this year. Among earnings, Citigroup rose after the financial giant delivered another positive surprise in the banking sector, posting profit of $1.25 per share against estimates of $1.17. Banks were expected to be the best sector amid an otherwise lackluster quarter. Other financials slated to post quarterly results this week include Goldman Sachs, Bank of America and Morgan Stanley. Additionally, tech giants including Google, Microsoft, Intel, IBM and Yahoo are also scheduled to report throughout the week. Analysts surveyed by Thomson Reuters expect S&P 500 companies' second-quarter earnings to have grown 2.8 percent from a year earlier, with revenue up 1.5 percent. (Read More: Bob Doll: Only strong earnings can keep rally going) Leap Wireless skyrocketed nearly 120 percent following news the provider agreed to be acquired by AT&T for $15 per share in cash, or about $1.2 billion. The deal represents an 88 percent premium to Friday's close. Solar stocks including First Solar, Suntech Power and LDK Solar soared after China boosted its 2015 target for soclar power capacity by more htan 60 percent. Also, Boeing recovered after investigators determined the Friday fire on a 787 Dreamliner at Heathrow Airport was not caused by a battery issue. Meanwhile, Honeywell it was invited by UK investigators to participate in the probe of the Dreamliner fire. Separately, a source with knowledge of the investigation told Reuters that the emergency locator transmitter was being looked at for possible involvement in the fire. Honeywell makes the device for the 787. Alexion Pharmaceuticals rose on a Reuters report that Switzerland's Roche is seeking financing for a possible Alexion bid.
—By CNBC's JeeYeon Park (Follow JeeYeon on Twitter: