MarketWatch I Asian Markets Latest News At The Time; June 17, 2013.

Asia
Hong Kong stocks off as China banks, property down HONG KONG (MarketWatch) -- Hong Kong stocks on Tuesday pulled back after a two-day rally amid uncertainty over the pace of the U.S. Federal Reserve's bond purchases, with Chinese property developers dropping after another strong monthly increase in home prices on the mainland. The Hang Seng Index dropped 0.8% to 21,039.02 and the Hang Seng China Enterprises Index gave up 1% to 9,645.56. Shares of each of the four largest Chinese banks dropped despite news that state-owned investment agency Central Huijin Investment Co. has increased stakes in them, with China Construction Bank Corp. losing 1.4% and Bank of China Ltd. shedding 1.5%. Among developers, China Overseas Land & Investment Ltd. fell 2.1% and China Resources Land Ltd. dropped 2.3%. The decline came on the heels of official data showing that home prices rose in 69 of 70 cities in May from the same month a year ago. China's Shanghai Composite was flat in choppy trade, after dropping in nine of the last 10 trading days.

Australia sees scope for more rate cuts: minutes LOS ANGELES (MarketWatch) -- The Reserve Bank of Australia is ready to cut interest rates further if need be, according to the minutes from its June 4 meeting, released Tuesday. The RBA's policy board "judged that the inflation outlook as currently assessed might provide some scope for further easing, should that be required to support demand," the minutes said. The RBA left rates unchanged at the June meeting. The Australia's dollar slipped following the minutes' release, buying 95.26 U.S. cents, down from 95.40 cents just prior to the release.

Email ThisBlogThis!Share to TwitterShare to FacebookShare to Pinterest
Labels: 2013., MarketWatch I Asian Markets Latest News At The Time; June 17

The mainstream financial news media's propaganda campaign against gold has gotten more intense than ever even as evidence abounds that gold -- the metal, not the paper labeled "gold" -- is in greater demand than ever. That's what Jeff Nielson of Bullion Bulls Canada writes in his commentary today, "Gold-Bashing Mythology Hits New Crescendo":

Email ThisBlogThis!Share to TwitterShare to FacebookShare to Pinterest
Labels: 2013., GATA I THE GATA DISPATCH; June 17

By Kate Gibson, MarketWatch
NEW YORK (MarketWatch) — U.S. stocks surged Monday, with the Dow industrials extending their triple-digit moves into a fifth session, as investors latched onto any clues ahead of Wednesday’s monetary-policy decision by the Federal Open Market Committee.
“I’m a little surprised investors are willing to get this much in front of the FOMC meeting, just on the off chance the Fed says something meaningful,” Mark Luschini, chief investment strategist at Janney Montgomery Scott. 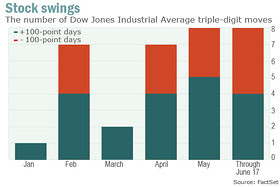 Enlarge Image
The Dow average made its fifth straight triple-digit move Monday.
Volatility returned to the stock market more than a month ago, when Wall Street interpreted testimony by Federal Reserve Chairman Ben Bernanke as a mixed message on the timing and pace of eventual Fed tapering.
The Dow Jones Industrial Average DJIA +0.73% has made a triple-digit move in 11 of the 16 sessions that followed Bernanke’s May 22 briefing to Congress.
After rallying as much as 191 points, the Dow finished up 109.67 points, or 0.7%, at 15,179.85, with 25 of its 30 components advancing, including Boeing Co. BA +1.18% , which said General Electric Co.’s GE +1.06%  aircraft-leasing arm had pledged to buy 10 of its 787 jets.
The S&P 500 SPX +0.76%  added 12.31 points, or 0.8%, to 1,639.04, with energy and technology pacing sector gains that included all but one of its 10 industry groups.
Why AMD is rallying
Three stocks climbing sharply after a mention in Barron's: AMD, Amgen, and Big Lots.

Netflix Inc. NFLX +7.12%  surged 7.1% after the video-streaming service inked a multi-year accord with DreamWorks Animation SKG Inc. for original programming. Micron Technology Inc. MU +3.76%   jumped 3.8% after Citigroup raised its price target for the memory-chip manufacturer.
The Nasdaq Composite COMP +0.84%  rose 28.58 points, or 0.8%, to 3,452.13.
For every stock falling, two gained on the New York Stock Exchange, where 677 million shares traded. Composite volume neared 3.1 billion.
Investors had dramatically curbed their enthusiasm for equities after the Financial Times on Monday afternoon published an article saying Bernanke would likely signal the central bank is close to cutting back on its $85 billion in monthly bond buys, while also reiterating any such move is dependant on the economy.
But the FT writer behind the piece, U.S. economics editor Robin Harding, then tweeted that he was only offering his view point, and had not insider knowledge of what the Fed would do.
“Most observers expect Bernanke to clear things up for them on Wednesday with respect to the tapering question. What if it is the same old line, ‘it’s data dependent?’ I’d prefer to take some profits and hedge going into the Wednesday press conference,” said Elliot Spar, market strategist at Stifel, Nicolaus & Co.
“We don’t expect to see any change in policy, either in bond buying or interest rates,” Luschini added of expectations the central bank would hold its federal-funds-target rate near zero and maintain its asset purchases.
The Fed Tuesday begins a two-day meeting, with Bernanke slated to speak at a press conference after the Wednesday decision. Stocks declined last week as investors considered whether Bernanke would communicate that reduced central-bank stimulus lies ahead.
Gold prices fell and oil futures also slid; the dollar advanced against other currencies and Treasury prices were mixed, with the yield on the 10-year note 10_YEAR +2.39%  used in determining mortgage rates and other consumer loans at 2.177%.
“The bond market is really unchanged at this juncture, perhaps anticipating the FOMC meeting for any kind of guidance,” said Luschini.
Economic data on Monday had a gauge of factory activity in the New York region and a separate index of home-builder sentiment rising in June.
The manufacturing report was “clearly positive and a welcome turnabout from the previous reading,” while the builder results reinforce “what has been a good news story in the housing market,” said Luschini.
Kate Gibson is a reporter for MarketWatch, based in New York. Follow her on Twitter @MWKateGibson.
at June 17, 2013 No comments: Links to this post

Stocks recovered from their lows to end higher across the board in another choppy session Monday, but investors continued to question when the Fed could begin to wind down its asset-purchase program.

(Read More: Here's Bernanke: Time for the Fed to Be Specific)

Stocks briefly took a leg lower as investors reacted a Financial Times article, released around 2pm ET, which stated that Fed Chairman Ben Bernanke is likely to signal that the central bank is "close to tapering down" its $85 billion-a-month in asset purchases during the highly-anticipated press conference on Wednesday. Major averages had been up more than 1 percent for most of the day, boosted by a global rally and amid optimism that Bernanke would provide more clarity on the central bank's easy money policy during the press conference.

Stocks eventually recovered from their lows as traders noted that the article did not contain much new information.
The Dow Jones Industrial Average finished up more than 100 points, logging its fifth-consecutive triple-digit move.

The S&P 500 and the Nasdaq also closed higher. The CBOE Volatility Index (VIX), widely considered the best gauge of fear in the market, traded near 17.

With the session's gains, the Dow and S&P 500 poked back into positive territory for the month.
Cyclical sectors including techs, energy and financials led the S&P 500 sector leaders, while telecoms ended in the red.


Who Cares About the Fed?
Dissecting today's market action, and whether the economy is strong enough to not care about the Fed, with the "Street Signs" panel.
"Today's driver seat continues to be speculation about what Bernanke will do, but should the yen begin to spike again, they will resume taking the wheel immediately," said Art Cashin, director of floor operations at UBS Financial Services. On the economic front, the New York Fed's "Empire State" manufacturing index gained to 7.84 in June from minus 1.43 in May, exceeding estimates for zero. A reading above zero indicates expansion. However, the forward-looking new orders index and employment reading weakened. Meanwhile, homebuilder sentiment jumped, with the NAHB/Wells Fargo Housing index soaring to 52 in June from 44 in May. It was the first time the index rose above 50 for the first time since April 2006. Reading above 50 signal that more builders view market conditions a favorable than poor. All major homebuilders including Toll Brothers and KB Home added to gains following the report. The two-day Fed meeting, ending on Wednesday with a press briefing and economic forecast from Chairman Ben Bernanke, will be the main focus for global markets this week. Investors will be listening for details on when the Fed may start scaling back its $85 billion monthly bond purchases. "There's been a tug-of-war in the market [in the last few sessions], but investors are anticipating some more clarity coming from the FOMC meeting on Wednesday," said Matt Kaufler, portfolio manager of the Federated Clover Fund. "My personal view is that the dips should be bought…as there's still room in the market left to the upside."
The Fed is also expected to provide an update on its economic projections for 2013-2015. The Fed's latest projections, made in March this year, saw real GDP growth at around 2.6 percent in 2013 and 3.2 percent in 2014. In terms of unemployment, the Fed projected a rate of around 7.4 percent in 2013, improving to around 6.9 percent in 2014. "If, and how, these forecasts change could send an important signal about the Fed's near term intentions," said Scicluna. In company news, Smithfield Foods advanced after shareholder Starboard Value said the pork processor should be broken up rather than be sold to Chinese meat company Shuanghui International. The activist shareholder, which disclosed a 5.7 percent stake in the company, said Smithfield might be worth "well in excess" of the $34 per share offered by Shuanghui if it split into hog production, pork and international units and shopped the businesses separately. Netflix soared to lead the S&P 500 gainers after the online move-streaming company struck its largest-ever original content deal with DreamWorks Animation. Facebook edged higher after the social-networking giant sent out invitations to members of the press for a "new product" event this Thursday. Investors will also be focused on Apple stock, after the tech giant closed below its 50-day moving average of $434.76 last Friday, after trading on either side of the level all week. (Read More: Apple Received up to 5,000 US Data Requests in 6 Months) In other news, U.S. crude oil prices may return to $100 per barrel this week, according to a CNBC sentiment survey, after prices rebounded to a nine-month high on Friday. JPMorgan strategists said in a note that investors are ignoring the possibility of a price shock due to Mideast tensions that could sent brent crude prices to $115 a barrel this year. (Read More: $100 a Barrel Looms for US Crude This Week) President Barack Obama will meet with leaders of the world's richest countries in Northern Ireland on Monday, for the annual meeting of the Group of 8 (G8). (Read More: Obama Faces Tough Sell on Europe Austerity at G8)
—By CNBC's JeeYeon Park (Follow JeeYeon on Twitter:

A rusty supply chain will contribute to uneven growth and continuing volatility in the sector, but industry watchers are confident that prices ... READ MORE
at June 17, 2013 No comments: Links to this post

Spot Prices as of close of trading in New York
at June 17, 2013 No comments: Links to this post

Email ThisBlogThis!Share to TwitterShare to FacebookShare to Pinterest
Labels: 2013., CMI Spot Prices as of Close of Trading in New York on June17

Victory for the Islamic Republic: The Economist I New Selected Articles - June 16, 2013.

Email ThisBlogThis!Share to TwitterShare to FacebookShare to Pinterest
Labels: 2013., The Economist I New Selected Articles - June 16