By Kate Gibson, MarketWatch
NEW YORK (MarketWatch) — U.S. stocks jumped on Friday, with the benchmark indexes posting their first weekly gain in three, as May payrolls rose more than forecast, but not so much as to cause worry about the Federal Reserve quickening any plans for monetary tightening.
“All that seems to matter is we nominally met our expectations on employment,” said Bruce McCain, chief investment strategist at Key Private Bank.
Takeaways from the jobs report
Simon Constable and Ben Casselman discuss a few of the takeaways from the May jobs report.

“Maybe the correction is over, and the wicked witch is dead. But my suspicion is we need to do a little more work at least in consolidating sideways,” he added.
Investors are tracking economic data with more than the economy in mind, as the Federal Reserve is expected to begin cutting its $85 billion in monthly bond purchases once the central bank deems the recovery on sound enough footing to withstand the reduced stimulus.
“I don’t think this [the nonfarm-payrolls report] is going to push them too far one way or the other. The unemployment rate is still above their target, and other than gasoline prices, we’re not seeing much in the way of inflationary forces that would scare them,” said McCain.
Posting a weekly gain of 0.9%, the Dow Jones Industrial Average DJIA +1.38%  advanced 207.50 points, or 1.4%, on Friday to 15,248.12, with Boeing Co. BA +2.74%  leading the pack, up 2.7%. Friday’s session is the best performance for the blue-chip index since Jan. 2. 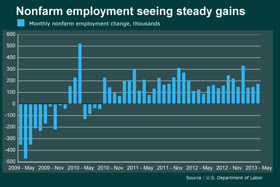 Enlarge Image
Rising 0.8% from the prior Friday’s finish, the S&P 500 index SPX +1.28%  added 20.82 points, or 1.3%, to 1,643.38, with consumer discretionary pacing gains that included nine of its 10 major industry sectors.
The Nasdaq Composite COMP +1.32%  climbed 45.16 points, or 1.3%, to 3,469.22, leaving it up 0.4% for the week.
For every share falling just over two gained on the New York Stock Exchange, where 721 million shares traded. Composite volume neared 3.3 billion.
Gold futures GCQ3 -2.44%  shed $32.80 to finish at $1,383 an ounce on the Comex division of the New York Mercantile Exchange, with the precious metal off 0.7% from last Friday’s close.
The price of oil CLN3 +1.54%  climbed $1.27 to settle at $96.03 a barrel, with crude futures up 4.4% for the week.
Treasury prices fell, pushing the yield on the 10-year note 10_YEAR +4.62%  used in determining mortgage rates and other consumer loans to 2.175%.
The U.S. dollar DXY +0.10%  gained against currency rivals.
U.S. stock futures reverted from little changed to solid gains after the Labor Department report, which had payrolls climbing 175,000 last month after a revised 149,000 rise in April. The unemployment rate climbed to 7.6% from 7.5% as more Americans stepped into the labor pool.
“The labor market continues to trudge forward at a solid, though unspectacular, pace — not unlike the economy as a whole,” said Jim Baird, chief investment officer for Plante Moran Financial Advisors.
The report “does nothing to change the broader view that the Fed is set to steadily reduce its pace of asset purchases at the September meeting and that all else equal, good news should be taken as good news,” wrote Dan Greenhaus, chief global strategist at BTIG LLC, in emailed commentary.
The Fed’s multiple rounds of asset buying, along with record corporate profits, are seen as the primary drivers of the bull market for U.S. equities, now in a fifth year.
Kate Gibson is a reporter for MarketWatch, based in New York. Follow her on Twitter @MWKateGibson.
at June 07, 2013 No comments:

The Conscience of a Liberal Who Has Draghi's Back? By paul Krugman: The New york Times Opinion Today; June 07, 2013.

King of My Castle? Yeah, Right

Laws that give landlords few rights, even when leasing apartments in their own homes, help explain San Francisco's housing shortage.

Can capitalism end the drug war?

Obama and Xi Must Think Broadly to Avoid a Classic Trap

Thucydides saw the catastrophic dangers when a standing power fears the rise of a challenger.

If Vietnam's leaders continue to cling to an outdated anti-democratic ideology and permit rampant Chinese expansionism, their demise is inevitable.

Can the Human Blueprint Have Owners?

Should companies be allowed to patent genes?

Lincoln saw Appalachia as a key to winning the war. But first, he had to get a good map.

The scooping up of all our phone records is an abuse of power that demands a real explanation.

Susan Rice and Samantha Power bring activist styles to their new positions in the Obama administration.

What's the Purpose of the N.S.A. Surveillance Program?

The White House said it was tracking known terrorists, but it's more likely that investigators are identifying suspects for the first time.

Who Has Draghi's Back?

The young and healthy and the fate of Obamacare.

A day in the life of armed America.

Widespread protests in Turkey started with focused anger over plans to replace an urban park with a mall.
at June 07, 2013 No comments:

Vancouver city council is expected to amend bylaws on June 11 to allow breweries and distilleries that operate in industrial areas to... READ MORE

B.C. Pavilion Corp.'s (PavCo) chairman and one of its directors quietly stepped down to assume their new roles as ... READ MORE

While Canada as a whole recorded the highest monthly job gains in 11 years, B.C.’s employment numbers were slightly down in May, Statistics Canada reported in ... READ MORE

The Tahltan Central Council says it has grave concerns about a coal mine proposed for the Klappan region in northern B.C. ... READ MORE

Global housing markets pick up – except in Europe: Scotiabank

Harry Potter and the Deathly Hallows: Part 2 includes a scene involving fire demons and a tower of furniture that was particularly challenging to ... READ MORE
at June 07, 2013 No comments:

What's Next for the Markets?: MoneyShow Investors Daily Alert; June 07, 2013.


Options Idea
Make Money Even When You're Wrong, Greg Loehr