LOS ANGELES (MarketWatch) -- Hong Kong's stock market was due to open at 1 p.m. local time for the afternoon session after the Hong Kong Observatory dowgraded its rain warning to "amber" from "black," indicating easing rains. The morning session was cancelled due to the warning. 9:56 p.m. Today
Hong Kong to open for afternoon as rains ease


LOS ANGELES (MarketWatch) -- Australian stocks rose Wednesday, with mining issues continuing to recover from recent weakness that stemmed in part from concerns about slowing in China. The S&P/ASX 200 rose 0.4% to 5,200, higher as shares of BHP Billiton Ltd. gained 1.7%, while shares of Rio Tinto Ltd. and Fortescue Metals Group Ltd. each jumped 2.3%. Shares of gold producer Newcrest Mining Ltd. , however, lagged, losing 1.6%. Financial stocks were mixed, with National Australia Bank Ltd. up 0.2%, while Westpac Banking Corp. shed 0.1%. Also in focus Wednesday, shares of Seven West Media dropped 6.6% after private equity firm KKR & Co. moved to sell its 12% stake in the broadcaster. The stake is worth about 260 million Australian dollar ($255.25 million). 8:41 p.m. Today
Australia stocks advance, paced by miners
at May 21, 2013 No comments:

Email ThisBlogThis!Share to TwitterShare to FacebookShare to Pinterest
Labels: 2013., Asian Latest News by MarketWatch May 21

Gerald Celente Interviewed by ABC Australia with Ian Henschke - on May 1, 2013.

Email ThisBlogThis!Share to TwitterShare to FacebookShare to Pinterest
Labels: 2013., Gerald Celente Interviewed by ABC Australia with Ian Henschke - on May 1

One Response to Apple Tax Strategy May Be to Copy It: The New York Times: ALERT FGC BOLSA - FGC FINANCIAL MARKETS May 21, 2013.

One Response to Apple Tax Strategy May Be to Copy It

An unintended consequence of a Senate hearing might be companies deciding to take advantage of the same loopholes as Apple.

Silver market analyst and market rigging whistleblower Ted Butler speculates tonight in line with Hong Kong fund manager Bill Kaye (http://www.gata.org/node/12567) to the effect that JPMorganChase and other big bullion banks were behind the recent smashing of the gold and silver futures markets so they might obtain metal cheaply, particularly by redeeming shares of the gold and silver exchange-traded funds GLD and SLV and draining their metal. Butler's commentary is headlined "Blockbuster in Gold" and it's posted at GoldSeek's companion site, SilverSeek, here:

Email ThisBlogThis!Share to TwitterShare to FacebookShare to Pinterest
Labels: 2013, GATA - THE GATA DISPATCH May 21

The New York Times Global Update May 21, 2013: Crews Search for Survivors in Oklahoma After Tornado

Email ThisBlogThis!Share to TwitterShare to FacebookShare to Pinterest
Labels: 2013, The New York Times Global Update May 21

By Polya Lesova, MarketWatch , Victor Reklaitis
NEW YORK (MarketWatch) — U.S. stocks rose on Tuesday after comments from two Federal Reserve officials suggested that the central bank is not close to tapering its bond-buying program.
The S&P 500 index SPX +0.17%  gained 8 points, or 0.5%, to 1,674.16, with health care posting the biggest gains and telecommunications the biggest laggard among the 10 major industry groups.
The Dow Jones Industrial Average DJIA +0.34%  rose 76 points, or 0.5%, to 15,411.
The Nasdaq Composite COMP +0.16%  rose 8 points, or 0.3%, to 3,505.
Stocks accelerated gains in the afternoon after New York Fed President William Dudley, who is also vice chairman of the Federal Open Market Committee, said that the Fed may adjust the pace of asset purchases up or down depending on the economic outlook and that he was unsure which way the next change will be.
Earlier in the day, St. Louis Fed President James Bullard said the central bank should continue with its present bond-buying program and adjust the rate of purchases in view of incoming data on growth and inflation. He said the program is the best policy option and has been effective.
The Fed’s $85-billion-a-month asset-purchase program aims to boost economic growth and lower the jobless rate. The program has buoyed the stock market and its end — if not properly managed — may hurt sentiment among equity investors, potentially triggering a correction in the market.
On Wednesday, Federal Reserve Chairman Ben Bernanke will testify before Congress about the economic outlook, and the Federal Open Market Committee will release minutes from its latest meeting.
“Broadly speaking, investors are really waiting to see what Mr. Bernanke is going to say in front of Congress,” said Andrew Wilkinson, chief economic strategist for Miller Tabak. “The next 20 points in the S&P 500 are probably predicated on what he has to say.”
Stocks on Wall Street finished slightly lower on Monday, after Chicago Federal Reserve President Charles Evans said the Fed’s policy stance remains appropriate and the improving economy still faces headwinds.
The Dow and S&P 500 are on pace Tuesday to achieve record closes again, as bullish sentiment remains strong.
Goldman Sachs raised its year-end target for the S&P 500 to 1,750.
Deutsche Bank recommended staying long equities and added that valuations implied that the S&P could trade as high as 1,800 by year end. 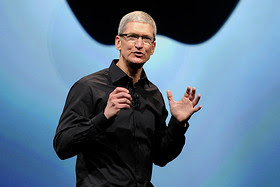 Bloomberg News Enlarge Image
Apple CEO Tim Cook testified at a Senate hearing Tuesday about the company’s tax practices.
Home Depot Inc. HD +2.54%  was one of the top gainers in the Dow, with its shares up 3.2% after the home-improvement retailer reported a jump in quarterly earnings, buoyed by the recovery in the housing market.
Also in the Dow, J.P. Morgan Chase & Co. JPM +0.15%  shares gained 1.7%. The bank’s annual meeting took place in Florida Tuesday and a nonbinding shareholder vote on splitting the CEO and chairman roles — currently held by Jamie Dimon — failed to passed.
Shares of Apple Inc. AAPL -0.74%  slipped 0.5%, as Chief Executive Tim Cook defended the tech titan’s tax practices as proper at a Senate hearing Tuesday. A Senate panel has said Apple avoided corporate-income taxes on billions of dollars in overseas income over the past four years. Read MarketWatch’s live blog on the Apple hearing.
Polya Lesova is MarketWatch's New York deputy bureau chief. Follow her on Twitter @PolyaLesova. Victor Reklaitis is a New York-based markets reporter for MarketWatch.
at May 21, 2013 No comments:

Email ThisBlogThis!Share to TwitterShare to FacebookShare to Pinterest
Labels: 2013., MarketWatch - Wall Street at Close Report May 21

The Economist - New Selected Articles May 21, 2013: Shipping containers, the Emperor Constantine and Tumblr

Email ThisBlogThis!Share to TwitterShare to FacebookShare to Pinterest
Labels: 2013., The Economist - New Selected Articles May 21

Court Hears Appeal of Ex-Director of Goldman A lawyer argued that Rajat Gupta, found guilty of leaking boardroom discussions, should be granted a new trial because a judge erroneously admitted wiretapped conversations.
Irregularities Suspected at Hong Kong Mercantile Exchange The Hong Kong securities regulator announced on Tuesday that it had discovered possible financial irregularities at the just-shuttered Hong Kong Mercantile Exchange and said it referred the matter over to the police for investigation.
Herbalife Hires PricewaterhouseCoopers as Auditor Herbalife has hired PricewaterhouseCoopers as its auditor, replacing KPMG, which had resigned as the company's auditor after it was revealed that a former partner had leaked secret information about clients to a third party.
Despite Stumbles, a Promising Path for Start-Ups in Brazil Investors and entrepreneurs say that economic conditions in Brazil are difficult, but that long-term prospects remain highly favorable.
Sprint Raises Offer for Clearwire Stake Sprint Nextel raised its offer on Tuesday for the nearly 50 percent stake in Clearwire that it does not already own, just hours before shareholders were scheduled to vote on its earlier offer.
Morgan Creek to Acquire Signet Capital Management The investment firm Morgan Creek Capital Management announced on Tuesday that it had agreed to acquire the alternative funds business of Signet Capital Management.
Blackstone Leads Latest Chinese Privatization Bid The $662 million buyout bid for Pactera Technology International, an outsourcing firm, is the latest in a series of deals by private equity groups to privatize Chinese firms listed in the United States.
Wall Street Advocacy Group Turns to Former Lawmakers A former banker was successful at the helm of Sifma. But using former politicians to sweet-talk regulators and try to improve the image Main Street has of the industry could be a better strategy.

Economic Reports Data on Wednesday will include sales of existing homes for April.
Corporate Earnings Companies scheduled to release quarterly results on Wednesday include Target, Staples, Lowe's, Hewlett-Packard and SeaWorld.
In the United States The Federal Reserve chairman, Ben S. Bernanke, testifies on Capitol Hill before the Joint Economic Committee; and the Fed releases minutes from its Federal Open Market Committee policy meeting of April 30-May 1.
Overseas The Bank of Japan announces a monetary policy decision; Wolfgang Schäuble, the German finance minister, is to discuss a "New Deal for Europe"; and Kazuo Hirai, the chief executive of Sony, talks about his revival plan.

"The wiretaps should never have been admitted."
Rajat Gupta's lawyer, Seth P. Waxman, arguing that a federal appeals court should overturn his client's conviction.

Email ThisBlogThis!Share to TwitterShare to FacebookShare to Pinterest
Labels: 2013., DealBook P.M. Edition May 21

Email ThisBlogThis!Share to TwitterShare to FacebookShare to Pinterest
Labels: 2013., CMI Spot Prices as of Close of Trading in New York May 21
Newer Posts Older Posts Home
Subscribe to: Posts (Atom)