HONG KONG (MarketWatch) -- Japan's Economy Minister Akira Amari said Tuesday he hopes yen's foreign-exchange levels will settle at a level that corresponds with the relative strength of the domestic economy, according to a report. "I hope [foreign exchange] levels will settle so they match the basic strength of the Japanese economy," Amari said at a press conference after a regular government Cabinet meeting, according to a Dow Jones Newswires report. He reportedly hoped the market will find a point where the effect of the currency level on Japan's exports and imports "achieves a balance." The yen weakened after the comments, with the U.S. dollar buying 102.67 yen compared with 102.20 yen earlier in Tokyo trading. The dollar, which breached the 103-yen level last week, had on Monday weakened after Amari reportedly said that a correction in the Japanese currency had been "largely completed."


LOS ANGELES (MarketWatch) -- Stocks in Australia fell Tuesday in early trade, as losses in banking issues put the equity benchmark under pressure. The S&P/ASX 200 fell 0.4% to 5,190.40, nearly giving back the gain of 0.5% from the previous session. Stock in Australia & New Zealand Banking Group and Westpac Banking Corp. fell 0.9% and 0.6%, respectively, though Macquarie Group Ltd. fought to hang onto a fractional advance. Retailer Wesfarmers Ltd. lost 0.7%, falling alongside other stocks in the sector. But mining shares were mixed, with Newcrest Mining Ltd. jumping 6.1%, while BHP Billiton Ltd. slumped 0.4%. Hit hard in Tuesday's session were shares of Transfield Services Ltd. , down 22% after the contractor reduced its yearly profit forecast for a second time this year. Transfield also plans to cut 113 workers.
Australia stocks fall, with bank shares in the red


HONG KONG (MarketWatch) -- Japanese stocks retreated early Tuesday as a strengthened yen and caution over U.S. monetary-policy stance led investors to take profits after a sturdy recent rally. The Nikkei Stock Average fell 0.3% after ending the previous session at its highest level in more than five years, while the broader Topix gave up 0.1%. The Nikkei is still up more than 10% so far in May. Several exporters came off as the yen firmed up, with Sony Corp. down 1.4%, Renesas Electronics Corp. off 2.3% and Hino Motors Ltd. 1.4% lower. Softbank Corp. fell 1.3% after the Nikkei newspaper reported it's planning to set a record with a 400 billion yen ($3.91 billion) retail bond issuance. On the upside, Toshiba Corp. gained 0.6% on another Nikkei report it plans to sell a semiconductor assembly plant in China to a Taiwanese firm. 8:31 p.m. Today
Japan stocks pull back; exporters, Softbank drop
at May 20, 2013 No comments: Links to this post

Freedom of the press a threat to national security?: RTAmerica I RTNews May 20, 2013.

Email ThisBlogThis!Share to TwitterShare to FacebookShare to Pinterest
Labels: 2013., RTAmerica I RTNews May 20

Email ThisBlogThis!Share to TwitterShare to FacebookShare to Pinterest
Labels: 2013., The New York Times Global Update May 20

By Wallace Witkowski and Polya Lesova, MarketWatch
SAN FRANCISCO (MarketWatch) — U.S. stocks finished lower on Monday after comments from Chicago Federal Reserve President Charles Evans knocked them from new all-time highs set earlier in the day.
The S&P 500 index SPX -0.07%  finished down 1.18 points, or 0.1%, at 1,666.29, after touching a new high of 1,672.84 during the session.
Energy posted the largest gains of the index’s 10 major industry groups with consumer staples being the biggest laggard.
The index traded as low as 1,663.52 in the afternoon after Federal Reserve President Charles Evans said in Chicago that the central bank’s policy stance is appropriate and that the improving economy still faces headwinds. Evans is a voting member of the Federal Open Market Committee this year.
While defensive stocks have been dominating the rally for most of the year, there’s been new life in cyclical stocks recently, propelling the market into the “free skies” of record highs.
“Energy’s been a laggard, but what you’ve seen in May is a shift into cyclicals driving the market higher,” said Dan Greenhaus, chief global strategist at BTIG.
The energy sector rose 1.3% Monday, with the next highest gaining sector being industrials, which was up 0.3%.
Energy is the third best-performing sector in May, behind financials and industrials. Year-to-date, health-care stocks are still the best performers with a 22% gain. Then there’s financials with a nearly 22% gain and consumer discretionary, up 21%.
5 charts for yield-seeking investors

There are a few ways to beat Uncle Sam’s offer of less than 2% interest. MarketWatch's Laura Mandaro asked money managers and strategists where they go to hunt for yield. (Photo:
FactSet). 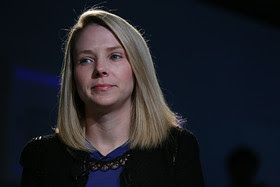 Bloomberg News Enlarge Image
Yahoo CEO Marissa Mayer.
In deal news, Yahoo Inc. YHOO +0.41%  said it would buy social-media site Tumblr for $1.1 billion. Yahoo shares gained 0.2%.
Actavis Inc. ACT +1.31%  said it has entered into an all-stock deal worth $8.5 billion to buy Warner Chilcott PLC WCRX -1.58%  to create a global specialty pharmaceutical group. Shares of Actavis rose 1.3% and those of Warner Chilcott climbed 2%.
Meanwhile, Dallas Fed President Richard Fisher, who isn’t a voting member of the FOMC, said the Fed can only slow the pace of its mortgage-backed securities, as a sudden stop would be “too violent” for the market.
On Wednesday, Fed Chairman Ben Bernanke is due to testify before the Joint Economic Committee about the central bank’s economic outlook, and the FOMC will release minutes from its most recent policy meeting.
“This big question is precisely when we’ll see the market react to the imminent tighter monetary conditions,” said Fawad Razaqzada, market strategist at GFT Markets.
“The longer the rally continues arguably, the bigger the reversion we face, but if the economic backdrop is robust enough, then perhaps the resulting pain will be short-lived,” Razaqzada said in emailed comments.
Wall Street advanced to a fourth weekly gain last week. The S&P 500 Index rose 2.1% last week to close at a record of 1,667.47 Friday, its 16th record close this year. Similarly, the Dow Jones Industrial Average rose 1.6% on the week to 15,354.40, its 21st record of the year.
Wallace Witkowski is a MarketWatch news editor in San Francisco. Follow him on Twitter @wmwitkowski. Polya Lesova is MarketWatch's New York deputy bureau chief. Follow her on Twitter @PolyaLesova.
at May 20, 2013 No comments: Links to this post

Email ThisBlogThis!Share to TwitterShare to FacebookShare to Pinterest
Labels: 2013., MarketWatch I Wall Street at Close Report May 20

Email ThisBlogThis!Share to TwitterShare to FacebookShare to Pinterest
Labels: 2013., DealBook P.M. Edition May 20

CMI Gold and Silver Spot Prices as of close of trading in New York Monday, May 20, 2013.

Email ThisBlogThis!Share to TwitterShare to FacebookShare to Pinterest
Labels: 2013., CMI Gold and Silver Spot Prices as of close of trading in New York Monday, May 20

The Conscience of a Liberal - Macro Machismo - by paul Krugman: The New York Times Opinion Today May 20, 2013.

Finance: The Fed is lifting Wells Fargo's asset cap so it can help lend to small business