A refusal to enact measures to build a fully competitive market will lead to stagnation and lack of regulation, Caixin Online writes in an editorial.
The time for China interest rate reform is now


LOS ANGELES (MarketWatch) -- Australian stocks were higher in early action Thursday, led by financial, energy and retail sector gains, but further weakness in mining shares limited the benchmark's advance. The S&P/ASX 200 rose 0.1% to 5,196, as Commonwealth Bank of Australia picked up 1%, looking for a fourth session of gains. Woodside Petroleum Ltd. rose 0.8% and shares of retailer Wesfarmers Ltd. bulked up 2.2%. Miners fell as metal prices dropped, with Newcrest Mining Ltd. off 5%, Rio Tinto Ltd. down 1.3% and BHP Billiton Ltd. lower by 0.4%. Also struggling were shares of Virgin Australia Holdings Ltd. , down 7.6% after the air carrier issued a full-year profit warning. 8:36 p.m. Today
Australia stocks edge up, but miners extend losses
Posted by Fernando Guzmán Cavero at May 15, 2013 No comments:

Gene Arensberg: So much for position limits on Comex gold: GATA I THE GATA DISPATCH May 15, 2013.

Gene Arensberg of the Got Gold Report today wonders aloud how April's gold smash, apparently involving more gold than has ever been dumped on the Comex futures market at once, about 40,000 contracts, did not violate the position limits of the exchange and the U.S. Commodity Futures Trading Commission.

Arensberg asks:
"Who was the large trader who decided to hammer the gold market with 40,000 contracts all at once?
"How did that trader manage to do so without running afoul of the CME Group position limits or the CFTC regulators?

"Was the initial trade by one, two, or many traders? If by one or two, then there is no way in hell the trade was 'legal' under the position limits.
"If by many traders all acting at once, then how is that possible without their conspiring to do so? (We are talking about the initial smash trade here, not the ensuing stops triggered.)"
Arensberg's commentary is headlined "So Much for Position Limits on Comex Gold" and it's posted at the Got Gold Report here:

Monetary metals investors might do well to send Arensberg's commentary to the members of the CFTC with a request for an explanation. The commissioners' e-mail addresses are included at the bottom of silver market analyst Ted Butler's latest commentary, denouncing the commission's negligence, at GoldSeek here:

Inquiries to members of Congress would be helpful too.
Please alert your secretary/treasurer about any responses: CPowell@GATA.org.

Email ThisBlogThis!Share to TwitterShare to FacebookShare to Pinterest
Labels: 2013., GATA I THE GATA DISPATCH May 15

Acting Chief of I.R.S. Forced Out Over Tea Party Targeting
Posted by Fernando Guzmán Cavero at May 15, 2013 No comments:

Email ThisBlogThis!Share to TwitterShare to FacebookShare to Pinterest
Labels: 2013, The New York Times Breaking News May 15

Email ThisBlogThis!Share to TwitterShare to FacebookShare to Pinterest
Labels: 2013., The New York Times Breaking News May 15

DealBook P.M. Edition May 15, 2013: The Trade: Why Hedge Funds' Criticism of the Fed May Be Right

Posted by Fernando Guzmán Cavero at May 15, 2013 No comments:

Email ThisBlogThis!Share to TwitterShare to FacebookShare to Pinterest
Labels: 2013., DealBook P.M. Edition May 15

MarketWatch I Wall Street at Close Report May 15, 2013: U.S. stocks rise for another record close

By Kate Gibson, MarketWatch
NEW YORK (MarketWatch) — U.S. stocks rose Wednesday, with hopes for ongoing central-bank stimulus bolstering sentiment amid economic reports illustrating a contraction in manufacturing.
“It seems like it’s becoming a broken record,” said Andrew Fitzpatrick, director of investments at Hinsdale Associates Inc., of the string of all-time highs, which again came into play on Wednesday.
After starting the session in the red, the Dow Jones Industrial Average DJIA +0.40% rose 60.44 points to 15,275.69, the index’s 20th record finish this year.
The market’s current bull run, now in its fifth year, comes amid continuing stimulus from the U.S. Federal Reserve as well as monetary easing by central banks around the globe, along with better-than-expected corporate earnings.
“Wall Street is getting more comfortable they won’t just pull the plug; they’ll do it at a more measured pace,” said Fitzpatrick, referring to the Federal Reserve.
“We’ve seen little reaction to the rumors that the Fed is behind closed doors trying to craft some kind of exit strategy,” he added of a Wall Street Journal report last week. 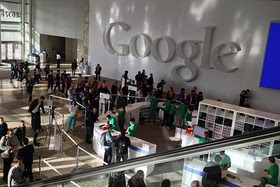 Ben Pimentel Enlarge Image
Google shares top $900 for first time as Internet giant kicks off developer conference.
That said, Fitzpatrick is among the consensus calls for a market pause or correction.
“I do think a pullback here is warranted, and the sooner we get it, the better.” Read blog about rally’s potential.
Dow component Cisco Systems Inc. shares CSCO +6.13% leapt higher after Wednesday’s closing bell as the networking giant reported quarterly results that beat Wall Street’s projections.
“The Cisco report tends to carry weight, especially in light of its outlook; it’s a good gauge in terms of the business climate and the economy,” said Fitzpatrick.
Tallying its 20th record close for 2013, the S&P 500 index SPX +0.51%   gained 8.44 points to 1,658.78, with consumer staples faring best and energy the poorest performing of its 10 industry groups.
Deere & Co. DE -4.40% fell 4.4% after the maker of agricultural equipment reduced its sales forecast.
Macy’s Inc. M +2.49% shares rose 2.5% after the department-store operator reported profit that exceeded expectations and raised its quarterly dividend.
Shares of Google Inc. GOOG +3.25% rose above $900 for the first time as the technology company kicked off a developer conference in San Francisco.
The Nasdaq Composite Index COMP +0.26% climbed 9.01 points to 3,471.61.
For every seven shares falling, eight gained on the New York Stock Exchange, where 742 million shares traded.Composite volume surpassed 3.6 billion.
The price of oil turned, with crude for June delivery CLM3 +0.20% gaining 9 cents to $94.30 a barrel on the New York Mercantile Exchange.
Industrial production in April fell by the most in eight months, and a separate report showed manufacturing unexpectedly contracted in May in the New York region.
The National Association of Home Builders/Wells Fargo housing-market index released Wednesday had overall confidence rising to 44 in May from 41 in April.
Separately, the Labor Department said that U.S. wholesale prices fell a seasonally adjusted 0.7% in April. The largest monthly drop in three years illustrated a decline in energy prices that has helped corporate bottom lines.
“The current stock-market rally, primarily fueled by central-bank funds, continues to amaze, given the fundamental economic climate,” Fred Dickson, chief investment strategist at Davidson Cos., wrote in a note.
Yet, investors can find some comfort in the Congressional Budget Office’s downward revision of the federal deficit to $642 billion, “a cut of nearly 50% from the deficit seen just two years ago,” Dickson added.

LittleNY/Shutterstock.com Enlarge Image
Macy's rises on first-quarter profit.
In Europe, weaker-than-expected euro-zone GDP data raised hopes the European Central Bank will ease policy further.
France slipped into a recession, while Germany narrowly avoided a contraction by expanding 0.1% in the first quarter, missing expectations of a 0.3% improvement.
Kate Gibson is a reporter for MarketWatch, based in New York.
Posted by Fernando Guzmán Cavero at May 15, 2013 No comments:

Email ThisBlogThis!Share to TwitterShare to FacebookShare to Pinterest
Labels: 2013., MarketWatch I Wall Street at Close Report May 15

Posted by Fernando Guzmán Cavero at May 15, 2013 No comments: