RTAmerica May 13, 2013: Justice Department admits to spying on Associated Press.

Email ThisBlogThis!Share to TwitterShare to FacebookShare to Pinterest
Labels: 2013., RT America May 13

Former Assistant U.S. Treasury Secretary Paul Craig Roberts today condemns the rigging of the gold and silver markets by the Federal Reserve as emblematic of a gangster state protecting banks at the expense of the public. Roberts' commentary is headlined "Gangster State America" and it's posted at his Internet site here:

Email ThisBlogThis!Share to TwitterShare to FacebookShare to Pinterest
Labels: 2013., GATA I THE GATA DISPATCH May 13

The New York Times Afternoon Update May 13, 2013: Obama Scoffs at Libya Outcry but Vows to Act on I.R.S. Audits.

Email ThisBlogThis!Share to TwitterShare to FacebookShare to Pinterest
Labels: 2013., The New York Times Afternoon Update May 13

By Polya Lesova and Saumya Vaishampayan, MarketWatch
NEW YORK (MarketWatch) — The S&P 500 stock index gained marginally on Monday, notching an all-time closing high after data showed a rise in retail sales and as investors mulled when the Federal Reserve may begin to scale back its $85-billion-a-month bond-buying program.
U.S. stocks fluctuated between small gains and losses for most of Monday’s trading session.
“The market is pricing in a diverse set of information,” said Stephen Wood, chief market strategist for Russell Investments. 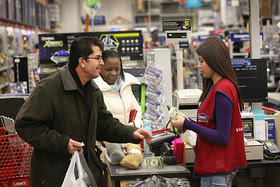 Getty Images Enlarge Image
Retail sales unexpectedly rose in April.
The S&P 500 index SPX +0.0043%  finished at 1,633.77 above Friday’s closing level of 1,633.70, marking a record close.
Health care was the best performing sector and telecommunications the worst performing one among the index’s 10 major industry groups.
The blue-chip Dow Jones Industrial Average DJIA -0.18%  declined 26.81 points, or 0.2%, to end at 15,091.68, with 13 of its 30 components in positive terrain. Aluminum producer Alcoa Inc. AA -1.95%  was the biggest decliner in the Dow, falling 2%.
The Nasdaq Composite Index COMP +0.06% rose 2.21 points, or 0.1%, to end at 3,438.79.
More than 590 million shares exchanged hands on the New York Stock Exchange. Composite volume topped 2.8 billion.
Better-than-expected data released Monday on retail sales had provided some support. Retail sales rose a seasonally adjusted 0.1% in April, while economists polled by MarketWatch forecast a 0.6% decline in sales.
Trading this week will be driven by data, according to Scott Wren, senior equity strategist at Wells Fargo Advisors, with particular emphasis on the Empire State index on Wednesday, Philadelphia Fed data on Thursday and the preliminary University of Michigan-Thomson Reuters consumer-sentiment gauge due Friday.
Still, even negative data won’t prompt a selloff in the stock market, he said. “It’s not going to sell off very much, almost no matter how bad the data is. Momentum is to the upside,” said Wren, citing flows into stocks, reasonable valuations and the Fed.
The Fed’s plans for scaling back stimulus were in the spotlight after The Wall Street Journal reported late Friday that Fed officials have mapped out a plan to exit the central bank’s bond-buying program. Citing those officials, the article said the Fed will cut its bond-buying program in careful and potentially halting steps, though the timing of when to start is still being debated. The Fed is eager to manage market expectations and prevent chaos.
In Chicago on Friday, Fed Chairman Ben Bernanke said the central bank was watching closely for potential risks that come with low interest rates.
“In the short term, anything that discusses the Fed’s exit strategy has been associated with market weakness, and today is no exception,” said Dan Greenhaus, chief global strategist at BTIG LLC.
But there is no more clarity on timing of a Fed exit.
“Is that really a surprise to the markets that the Fed has an exit strategy?” said Henrik Drusebjerg, senior strategist at Nordea Bank. He said when the Fed will implement the strategy is the big issue. “I still think the Fed will be all-in as long as macro numbers are weak.”
Nordea’s Drusebjerg said decent economic data this week will keep pushing investors into risky assets. “It’s absolutely possible you can see new records set again this week,” he said.
Is the economy ready for an end to the stimulus?
Jon Hilsenrath explains the thinking behind the Federal Reserve's plan to wind down its economic stimulus program, and how the issue is likely to be tackled by chairman Ben Bernanke's successor.


U.S. stocks rose Friday, with Wall Street logging a third week of record-setting advances. Closing at an all-time high, the S&P 500 index rose 7.03 points Friday to 1,633.70, leaving it up 1.2% for the week.
Japanese stocks on Monday jumped to their highest level in more than five years, lifted by upbeat profits and further weakness for the yen after the Group of Seven major economies offered up no criticism of Tokyo’s easing policies.
Stocks in Shanghai and Hong Kong finished lower after Chinese data showed retail sales meeting expectations, though industrial production and fixed-asset investment missed forecasts.
Among individual stock movers, Advanced Micro Devices Inc. AMD +0.48%  rallied 5.6% Monday, making it the top gainer in the S&P 500 index.
First Solar Inc. FSLR -0.10%  shares rose 2.3%. The solar-energy company posted a first-quarter profit of 66 cents a share last week, reversing year-ago losses.
Polya Lesova is MarketWatch's New York deputy bureau chief. Follow her on Twitter @PolyaLesova. Saumya Vaishampayan is a MarketWatch reporter based in New York. You can find her on Twitter @saumvaish.
at May 13, 2013 No comments:

Email ThisBlogThis!Share to TwitterShare to FacebookShare to Pinterest
Labels: 201., MarketWatch I Wall Street at Close Report May 13

Email ThisBlogThis!Share to TwitterShare to FacebookShare to Pinterest
Labels: 2013., The Economist I Selected New Articles May 13

Foreign workers getting most of Canada's new jobs: study

Canada’s job growth is showing signs of improving, according to Statistics Canada – but a new Canadian Labour Congress (CLC) study has found that most of the new jobs are being filled by ... READ MORE

Canadian cellphone bills have risen 13% since start of year: report

The average Canadian cellphone bill has increased $9 since last year to an average of $77 per month – more evidence that Canadians are being gouged by ... READ MORE

A massive anticipated demand for new gas supplies by liquefied natural gas industry in B.C. has yet to result in any increase gas field activity, according to ... READ MORE

The British Columbia Securities Commission is alleging that an Israeli citizen currently living in Vancouver has breached ... READ MORE

Majority of young Canadians to invest online in next five years: BMO

Potential future tenants vying for space at the current Vancouver Art Gallery (VAG) site at Robson Square are launching bids for public support ... READ MORE
at May 13, 2013 No comments: