Email ThisBlogThis!Share to TwitterShare to FacebookShare to Pinterest
Labels: 2013., The New York Times Global Update May 6

“My sense is that we will see some weakness in the very short term, but that weakness will set up the markets for the next push higher, eventually carrying the S&P 500 towards the 1,700 mark by July,” said Jeffrey Saut, chief investment strategist at Raymond James & Associates.
Gap Inc. GPS +5.62%  shares gained 5.6% after the clothing retailer projected first-quarter profit above expectations.
A steep decline in commodity prices slammed shares of energy and natural-resources companies, while the dollar DXY +0.52%  rose to a four-and-a-half-year high against the Japanese yen USDJPY +1.02% .
Energy companies including Tesoro Corp. TSO -2.94%  fell as oil prices CLM3 -0.48%  dropped 35 cents to $96.04 a barrel.
Shares of Hess Corp. HES -2.34% declined 2.3% after the oil-and-gas company said it would strip CEO John Hess of his chairman title after its annual meeting next week.
The Nasdaq Composite index COMP +0.80% rose 27.41 points to 3,436.58, with the index drawing a lift a day after Nvidia Corp. NVDA +0.07%  and Priceline.com Inc. PCLN +3.78%  reported quarterly profits that beat estimates.
The benchmark indexes all settled with weekly gains, with the Dow up 1%, the S&P 500 ahead 1.2% and the Nasdaq Composite rising 1.7% from last Friday’s close.
The rise has short sellers scrambling to cover bearish bets this week on high-profile stocks including Tesla Motors Inc. TSLA -0.10% and Groupon Inc. GRPN -0.16% . 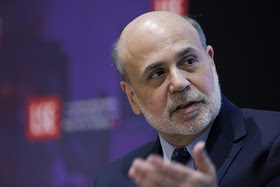 On the Comex in New York, gold futures GCM3 -1.49%  retreated $32 to end at $1,436.60 an ounce, leaving them down nearly 2% for the week.
In its monthly budget statement released Friday afternoon, the Treasury reported the U.S. tallied its largest budget surplus in five years last month, when tax payments come due.
Treasury prices fell, with the yield on the benchmark 10-year note 10_YEAR +4.91%  used in determining mortgages and other consumer loans rising to 1.899%.
In Chicago, Federal Reserve Chairman Ben Bernanke detailed efforts to regulate risk in the financial markets.
Speaking at the Chicago Fed’s yearly gathering on bank structure and competition, Bernanke said the U.S. central bank is keeping a close eye on the potential risks that come with interest rates being so low.
Vietnam and Sri Lanka reduced their interest rates on Friday, the latest such moves by global central banks, according to Bloomberg News.
On Thursday, U.S. equities tallied mild losses, even as data showed weekly jobless claims at a five-year low and as the dollar USDJPY +1.0029%  surged above 100 Japanese yen for the first time in more than four years.
The yen’s decline follows recent large stimulus moves by the Bank of Japan, with U.S. Treasury Secretary Jack Lew on Friday telling CNBC that he would tell Japan to play by the rules to avoid competitive devaluations.
Lew spoke from the sidelines of a two-day meeting of the Group of Seven finance ministers, which started Friday in Britain.
“Yesterday’s stutter-step seemed to be caused by a sharp reversal in the dollar, which spiked on the upside, combined with a downside reversal on the Treasury bond,” noted Saut.
Kate Gibson is a reporter for MarketWatch, based in New York.
at May 10, 2013 No comments:

Email ThisBlogThis!Share to TwitterShare to FacebookShare to Pinterest
Labels: 2013., MarketWatch I Wall Street at Close Report May 10

What Sentiment Says About the Market, Gary Tanashian: MoneyShow Traders Daily Alert May 10, 2013.

Tips for Traders
What Sentiment Says About the Market, Gary Tanashian

Options Idea
How to Trade Options Near Expiration, Michael Thomsett

Charts in Play
The Most Vulnerable Market, Tom Aspray Dr. Amrik Singh Tung, the BC Liberal candidate in the Surrey-Green Timbers riding, is among four doctors named in a negligence lawsuit ... READ MORE

Seven First Nations in various stages of self-government are lobbying the provincial government – whomever that may be following next week's ... READ MORE

Forestry firms must get ready for global lumber supercycle – or miss the boat: PwC

A forestry analyst is warning that companies who can’t adjust quickly to take advantage of surging lumber markets are going to ... READ MORE

Avcorp sees decline in revenue after loss of Cessna contract

Pulp and paper company Domtar (UFS:TSX) says its inability to compete globally with other pulp producers is behind the decision to ... READ MORE
at May 10, 2013 No comments:

The Conscience of a Liberal Same As They Ever Were, by Paul Krugman: The New York Times I Opinion Today May 10, 2013.