LOS ANGELES (MarketWatch) - Australian equities fell in early trading Friday, with losses in some resource stocks weighing on the benchmark index. The S&P/ASX 200 shed 0.2%. Mining shares were mixed following a pullback in metals prices on U.S. dollar strength . Newcrest Mining Ltd. fell 1.5% and Fortescue Metals Group Ltd. rose 0.3% and Rio Tinto Ltd. swung 0.1% higher. The company held its annual general meeting on Thursday. Financials were mixed, with Australia & New Zealand Banking Group down 0.4%, while Commonwealth Bank of Australia picked up 0.8%. In the currency market, the Australian dollar neared parity against the U.S. dollar overnight as the dollar jumped against major rivals after an upbeat reading on U.S. weekly jobless claims. The Aussie on Friday bought $1.0075 versus $1.0066. The S&P/ASX 200 was on track for a gain of about 1.3% for the week, during which Australia's central bank cut its key interest rate by a quarter-percentage point to 2.75%.
Australia shares slip, but aim for weekly gain

LOS ANGELES (MarketWatch) -- Japan's current-account surplus expanded almost twofold in March from February as the trade deficit shrank on the back of a falling yen, the Ministry of Finance reported Friday. The March current account was 1.251 trillion yen ($12.5 billion) in surplus, up from ¥637.4 billion the previous month and almost almost reaching its recent high of ¥1.307 trillion a year earlier. The trade deficit shrank to ¥219.9 billion from ¥677.0 billion in February, though compared to the year-earlier month, exports were only 0.3% higher, even as imports had risen 3.9%. The yen showed littled reaction, continuing to plumb fresh weakness after the dollar rose above the key ¥100 level overnight. 8:00 p.m. Today
Japan's current-account surplus widens in March

Email ThisBlogThis!Share to TwitterShare to FacebookShare to Pinterest
Labels: 2013, MarketWatch I Asia Latest News May 9

Email ThisBlogThis!Share to TwitterShare to FacebookShare to Pinterest
Labels: 2013, Gerald Celente - USAWatchdog.com - May 8

Email ThisBlogThis!Share to TwitterShare to FacebookShare to Pinterest
Labels: 2013., The New York Times Global Update May 9

Email ThisBlogThis!Share to TwitterShare to FacebookShare to Pinterest
Labels: 2013., DealBook News Alert May 9

By Kate Gibson, MarketWatch
NEW YORK (MarketWatch) — U.S. stocks declined moderately on Thursday, halting Wall Street’s record-setting streak, even as data showed that weekly jobless claims fell to a five-year low.
“We’ve come a long way in the first four-and-a-half months of the year, so we’re ripe for a small correction,” said Joe Heider, regional managing principal for Rehmann Financial Group.
Any pullback would likely fall into the 5%-to-7% range, he added.
Watch Green Mountain Coffee stock
Steven Russolillo has details on key stocks to watch on Thursday, among them Green Mountain Coffee, Tesla and Groupon.


After rising as much as 39 points and falling as much as 58, the Dow Jones Industrial Average DJIA -0.15% lost 22.50 points to end at 15,082.62.
After five straight record-high finishes, the S&P 500 index SPX -0.37%  lost 6.02 points to 1,626.67, with utilities hardest hit and health care faring best among its major sectors.
“The vast majority of our business clients and owners are doing very well, and are in full recovery mode, yet they are not feeling very positive,” said Heider, who attributes the negative sentiment to lingering fallout from the near-meltdown of the U.S. financial system and ongoing dysfunction in Washington.
“The shock was so severe in ‘08 and first quarter of ’09, so there is a hangover effect. And, I’ve never seen Washington as hell-bent on destroying one another,” he said.
Randy Frederick, managing director of active trading and derivatives at Charles Schwab, said: “Technically, the S&P 500 is in uncharted waters. People say there should be resistance at such and such, but there are no moving averages up there, so the only thing I can chart is the upward trend, and going to 1,650 within the next week or two is very realistic.”
Moving issues included Barnes & Noble Inc. BKS +24.25% , its shares surging 24% after a report by TechCrunch that Microsoft Corp. MSFT -1.00%  was considering an offer to pay $1 billion for the digital assets of Nook Media, a joint venture between the bookseller and other investors. 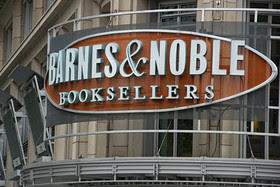 Getty Images Enlarge Image
Barnes & Noble shares jump on Microsoft report.
Tesla Motors Inc. TSLA -0.36%   leapt 24% a day after the electric-car maker reported its first profitable quarter.
The Nasdaq Composite COMP -0.12% declined 4.10 points to 3,409.17.
For every stock on the rise, nearly two fell on the New York Stock Exchange, where 662 million shares traded.
Composite volume approached 3.4 billion.
“Profit-taking is the only thing that makes sense,” Frederick said of the losses that initially followed government data that cast an unexpectedly positive light on the labor market.
“The trend is still intact,” added Frederick, referring to the third consecutive weekly decline in applications for unemployment benefits.
The Labor Department reported an unexpected drop in jobless claims, which last week fell by 4,000 to 323,000. The less-volatile four-week moving average fell to 336,750, its lowest level since November 2007.
Equities had wavered between gains and losses as the U.S. dollar rose above 100 yen USDJPY +1.55%  for the first time in four years, with the U.S. currency extending gains versus Japan’s currency amid deflation-curbing moves by the Bank of Japan.
Crude prices declined, with oil futures CLM3 -0.66%  down 23 cents to $96.39 a barrel. The price of gold also fell, with futures for June delivery GCM3 -1.15% off $5.10 at $1,468.60 an ounce.
Treasury yields were mixed, with the benchmark 10-year note yield 10_YEAR +2.60%  at 1.814%.
U.S. equities advanced on Wednesday as corporate-profit outlooks bolstered sentiment, with the Dow industrials notching their second all-time close above 15,000 and the S&P 500 Index closing at an all-time high for a fifth straight session.
The S&P 500 has risen 14% this year on expectations of further monetary easing by the U.S. Federal Reserve and other central banks around the globe, with South Korea the latest to join the nations that have cut benchmark rates.
Kate Gibson is a reporter for MarketWatch, based in New York.
at May 09, 2013 No comments:

Email ThisBlogThis!Share to TwitterShare to FacebookShare to Pinterest
Labels: 2013., MarketWatch I Wall Street at Close Report May 9

Email ThisBlogThis!Share to TwitterShare to FacebookShare to Pinterest
Labels: 2013., DealBook I P.M. Edition May 9 The BG Group has unveiled its plans for a liquefied natural gas plant in Prince Rupert that would bring between 200 and 300 LNG tankers into port each year, consume more than ... READ MORE

A team of climate scientists is warning energy minister Joe Oliver that his continued support of Canada’s oil and gas industry will ... READ MORE

Canada has the second-highest number of foreign-born citizens of the G8 nations, and Vancouver has ... READ MORE

Even under a business-friendly Liberal government, the $6 billion Northern Gateway pipeline appeared to be ... READ MORE
at May 09, 2013 No comments: