China manufacturing growth stalling: HSBC data
LOS ANGELES (MarketWatch) -- HSBC revised its China manufacturing gauge lower, confirming a sharp slowing of growth at Chinese factories in April, according to data released Thursday. HSBC put the final reading of its Chinese manufacturing Purchasing Managers' Index at 50.4, down from a preliminary print of 50.5 and solidly below March's 51.6. Still, the result remained above the 50 mark that separates growth from contraction. The print was broadly in line with an official government version of the PMI, released Wednesday, which came in at 50.6 from March's 50.9. The details of the HSBC report were equally lackluster, with the bank saying that "April data signaled only a slight improvement of operating conditions ... as output and new orders both expanded at weaker rates." A subindex tracking new orders destined for export fell below 50 for the first time this year, signaling contraction. HSBC chief China economist Hongbin Qu said the picture of fragile recovery painted by the PMI report was "likely to weigh on the labor market, which is likely to invite more policy responses in the coming months." Stock markets reacted negatively to the report, with Hong Kong's Hang Seng Index and the Shanghai Composite both extending losses after the data to trade down 0.7% each. Australia, which counts China as its top trading partner, also saw equities weaken further after the PMI, with the S&P/ASX 200 trading down 0.9%.

Asian stocks fall; Tokyo down ahead of holidays Most Asian markets decline, tracking losses in the U.S. after the Federal Reserve’s monetary policy decision, with Japanese stocks dragged further down by a stronger yen and caution ahead of a long weekend. 9:24 p.m. Today
at May 01, 2013 No comments:


Economist Paul Krugman: End This Depression Now from Sixth and I Historic Synagogue on FORA.tv
at May 01, 2013 No comments:

Email ThisBlogThis!Share to TwitterShare to FacebookShare to Pinterest
Labels: Economist Paul Krugman: End This Depression Now: from Sixth and I Historic Synagogue on FORA.tv

NFA has taken the Associate Responsibility Action (ARA) to protect Escobio's customers since Escobio is soliciting and accepting funds for ST Metals, an unregistered and unregulated futures commission merchant (FCM).

Based on a customer complaint, NFA began an emergency examination of ST Securities on April 8, 2013. NFA was concerned that an affiliated entity of ST Securities, ST Metals, was acting as an unregistered FCM. Although the customer assumed that she would be trading physical metals, NFA noticed that all the customer trades were actually futures trades executed on U.S. exchanges. ST Metals is not registered with the Commodity Futures Trading Commission (CFTC) and is not an NFA Member. Under CFTC Regulations, only registered FCMs are authorized to accept customer funds to margin futures transactions.

After questioning by NFA, Escobio voluntarily liquidated all customer positions. Since ST Metals is not authorized to hold customer funds, NFA asked Escobio to transfer the funds to an NFA Member FCM. This process was completed the week of April 15, 2013. NFA is subsequently issuing this ARA to ensure that Escobio does not transfer, distribute or otherwise withdraw the funds. Escobio is also prohibited from soliciting or accepting any customer funds used to margin futures trades.
The ARA will remain in effect until such time as Escobio has demonstrated to the satisfaction of NFA that he is in complete compliance with all NFA Requirements. Escobio may request a hearing before NFA's Hearing Committee.

Email ThisBlogThis!Share to TwitterShare to FacebookShare to Pinterest
Labels: 1, 2013., NFA I Enforcement Actions May Profit at B.C. mining companies dropped in 2012, according to PwC’s 2012 BC Mining Industry Survey released yesterday to ... READ MORE

Vancouver’s mobile gaming industry is rallying around those recently laid off by hosting a job fair May 3 that will be ... READ MORE

Gold's Gym aims to muscle in on local gym market

Competitors surprised that the franchiser, whose Richmond outlet recently closed, now plans to open 20 new Vancouver gyms within two years ... READ MORE
at May 01, 2013 No comments:

Email ThisBlogThis!Share to TwitterShare to FacebookShare to Pinterest
Labels: 2013., The New York Times Global Update May 1


NEW YORK (MarketWatch) — U.S. stocks declined Wednesday as the Federal Reserve said it would keep buying $85 billion in bonds each month, but may cut or increase the program depending on the economy.

“They are hedging against some weak economic data,” Liz Ann Sonders, chief investment strategist at Charles Schwab, said of the Fed’s language which opened the door to raising its bond purchases. “I don’t think it suggests they are considering it,” she added.

“For the most part, this is an expected nonevent,” Sonders said.

The Federal Reserve’s policy statement followed a two-day meeting, with the central bank’s open market committee maintaining its monthly bond purchases at $85 billion and leaving its benchmark-interest-rate target unchanged at zero to 0.25%.

“We are in this soft spot,” said Bill Stone, chief investment strategist at PNC Wealth Management in Philadelphia, referring to the U.S. economy.


Keep your eye on Facebook
Polya Lesova highlights stocks to watch closely on Wednesday, including Facebook, which reports earnings after the bell. Photo: Getty Images

“Earnings have actually looked good, but revenue has certainly been light this quarter. The companies beating on earnings and revenue, which is of course a rare animal this quarter, are trading well, while the opposite is true of the others,” said PNC’s Stone. 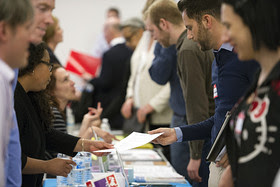 “In a liquidity-driven market, cash flow is king. While stocks are fully priced by traditional measures, they are remarkably cheap through bond goggles,” wrote Jack Ablin, chief investment officer at BMO Private Bank.

Apple Inc. AAPL -0.79%  is “the latest company to exploit the gaping valuation spread between bonds and stocks,” said Ablin, referring to the iPhone maker’s sale of $17 billion of debt on Tuesday in what amounted to the largest corporate bond offering ever. Read: Apple trading floods bond market.

Wednesday’s economic reports had Automatic Data Processing Inc. reporting private-sector jobs in April rose by a smaller-than-expected 119,000. Read more on ADP report.
The ADP report is “disappointing, and will probably lead most people to be more conservative on the payroll number on Friday,” said PNC’s Stone, referring to the government’s scheduled release of data on nonfarm payrolls for April.

And, the Institute for Supply Management’s manufacturing index fell to 50.7 in April, while a gauge of construction spending showed a 1.7% fall in March. Read: U.S. economy heads for another spring swoon.
Kate Gibson is a reporter for MarketWatch, based in New York.
at May 01, 2013 No comments:

Email ThisBlogThis!Share to TwitterShare to FacebookShare to Pinterest
Labels: 2013; MarketWatch, Wall Street at Close Report May 1

DealBook P.M. Edition May 1, 2013: The Trade: In Brown-Vitter Bill, a Banking Overhaul With Possible Teeth

Bonds: Treasury yields are flat ahead of jobless claims