By Polya Lesova, MarketWatch
NEW YORK (MarketWatch) — U.S. stocks ended mostly lower on Friday after a report showed the economy expanded at a slower pace than expected in the first quarter and a gauge of consumer sentiment fell in April.
However, gains for Hewlett-Packard Co. and Chevron Corp. helped the Dow Jones Industrial Average finish in positive territory.
The S&P 500 index SPX -0.18%  fell 2.92 points, or 0.2%, to end at 1,582.24 after hitting an intraday low of 1,577.56. The benchmark snapped a five-session winning streak Friday, but it posted weekly gains of 1.7%.
The technology and consumer staples sectors were the only gainers among the S&P 500’s 10 major industry groups, while materials was the worst performing sector. See: 14 cheap dividend stocks for a cheap market.
The technology-heavy Nasdaq Composite COMP -0.33%  dropped 10.72 points, or 0.3%, to end at 3,279.26, leaving it up 2.3% for the week.
“What’s happening today is a little bit of jitters on the economic front and a little bit of jitters on the earnings front,” said Adam Sarhan, chief executive of Sarhan Capital. Investors are also growing more concerned over a steeper-than-expected downturn in Europe, he said.
More than 681 million shares traded on the New York Stock Exchange. Composite volume topped 3.1 billion.
The Dow Jones Industrial Average DJIA +0.08% rose 11.75 points, or 0.1%, to end at 14,712.55, leaving it up 1.1% for the week.
Hewlett-Packard Co. HPQ +1.94%  rose 1.9%, leading gainers in the 30-stock blue-chip index.
Chevron Corp. CVX +1.29%  was another gainer in the Dow, rising 1.3%. The oil major said its first-quarter earnings fell to $6.2 billion, or $3.18 per share, from $6.5 billion, or $3.27 a share, in the same period a year ago, but the results still exceeded analyst expectations.
Alcoa Inc. AA -1.43%  and United Technologies Corp. UTX -1.04%  were the biggest decliners in the Dow, dropping 1.4% and 1%, respectively.
Week ahead: Fed, jobs, Facebook
The Federal Reserve’s meeting on monetary policy, March employment data and Facebook’s earnings will keep investors and traders on their toes next week.

The Commerce Department said before the opening bell that gross domestic product grew at a 2.5% pace in the first three months of 2013, up from 0.4% in the fourth quarter. Economists surveyed by MarketWatch had forecast GDP growth of 3.2%. See: Breaking down the GDP report in charts.
“The disappointment will push back expectations of when the Fed will start to withdraw its stimulus, especially as recent data suggest the rate of growth could weaken again in the second quarter,” said Chris Williamson, chief economist at Markit, referring to the Federal Reserve’s bond-buying program, which is aimed at boosting economic growth and lowering unemployment. The Federal Open Market Committee is due to hold a meeting on monetary policy on Tuesday and Wednesday, and it’s expected to keep its bond buying unchanged at $85 billion a month.
GDP comes in below expectations
Brendan Conway discusses the disappointing results in the first-quarter GDP. Photo: Getty
Images.


Shortly after Friday’s opening bell, the University of Michigan-Thomson Reuters consumer-sentiment gauge fell to a final April reading of 76.4, the lowest since January, from a final March reading of 78.6. Economists had expected it to be even lower.
Gains for Apple Inc. helped the S&P 500 pare losses in late trading. Shares of the iPhone maker AAPL +2.16%  rallied 2.2%, leaving it up 6.8% for the week. The company has a large weighting in the S&P 500 and therefore its moves have a big impact on the index. This week, Apple reported first-quarter earnings above expectations and said it was raising its dividend and adding $50 billion to its share-buyback program.
Among other individual stock moves, PerkinElmer Inc. PKI -11.95%  was the top decliner in the S&P 500, sinking 12% after the maker of health-testing equipment lowered its full-year outlook.
Expedia Inc. shares EXPE -9.87%  slumped nearly 10% after the online travel site said its first-quarter loss widened. Read about Expedia and other stocks making big moves in Friday trading. 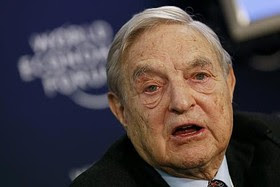 Reuters
George Soros takes a 7.9% stake in J.C. Penney, boosting the retailer’s shares.
Shares of Amazon.com Inc. AMZN -7.24%  fell 7.2% as the e-commerce group said late Thursday it may report a second-quarter operating loss.
J.C. Penney Co. JCP +0.06%  rallied nearly 12%, making it the top gainer in the S&P 500 after hedge-fund investor George Soros reported a 7.9% stake in the struggling retailer.
D.R. Horton Inc. DHI +8.68%  shares jumped nearly 9% after the company posted a surge in fiscal second-quarter profit and a 34% rise in orders.
Sarhan Capital’s Sarhan noted that 70% of companies that have reported so far have beaten expectations, and earnings are on track to come in 1.1% lower versus the first quarter of 2012.
“If that happens, it’ll be the first annual decline on a year-on-year basis since 2009,” he said.
Polya Lesova is MarketWatch's New York deputy bureau chief. Follow her on Twitter @PolyaLesova.
at April 26, 2013 No comments: