This is a massive attempt to break gold in order to camouflage the weakening Western banking sector. Paid bashers are flooding in to all pro-gold sites and many other pro-gold sites are under attack in other ways.
Gold banks are flogging the paper market seeking to depress the price but without selling too much.
It is so obvious that this is a gold bank-organized strategy to keep gold under $1,600. Old lows will hold and the reversal will be at a spiritual level.
My strategy is simply to do nothing.
at April 02, 2013 No comments: Links to this post

Email ThisBlogThis!Share to TwitterShare to FacebookShare to Pinterest
Labels: 2013., GATA I THE GATA DISPATCH 2 April

“You have continued confirmation that the economy is in pretty good shape,” said Jim Dunigan, managing executive for investments at PNC Wealth Management.

UnitedHealth Group Inc. UNH +4.70% led gains among all but seven of the benchmark’s 30 components. The health insurer rallied 4.7%.

UnitedHealth and other insurers surged after the government relinquished plans to cut payments for private Medicare Advantage insurers and said it would instead hike them by 3.3%.

“You look at these levels and a lot of people are scratching their heads. But if you look at past peaks, the market is on much better footing than five years ago. Whether you look at earnings, dividends, sales or book values, valuations are in much better shape,” said Dunigan.

The technology-heavy Nasdaq Composite index COMP +0.48%  rose 15.69 points, or 0.5%, to 3,254.86.
Shares of Apple Inc. AAPL -0.07%  rose 0.2%. Analysts at Goldman Sachs removed the stock from their U.S. conviction list, but maintained a buy rating on the consumer-electronics maker. Apple shares sank Monday as the company apologized after coming under criticism in China for customer-service policies.

Blame game begins in Cyprus
Now that one of its major banks has been closed and many depositors have faced a levy as part of its debt bailout, Cyprus is trying to work out how it got into such a financial mess. WSJ’s Alkman Granitsas looks at the accusations that have started to fly and the investigation that is planned.


Gold futures for April delivery GCJ3 -1.53%   lost $24.90, or 1.6%, to finish at $1,575.10 an ounce.
In economic news Tuesday, the Commerce Department reported factory orders rose 3% in February, in line with expectations.
Wall Street saw pressure Monday after the Institute for Supply Management’s factory index unexpectedly declined in March, although the gauge remained in positive territory.
“Although we’re in a recovery, it’s still lackluster compared to others. We lost about eight million jobs in the recession and gained back five million or so. By most historical recoveries, we should have added back all the jobs and then some,” said Dunigan, who estimated Friday’s monthly payrolls report will show the economy added about 185,000 jobs in March.
In an ongoing bid to bring down the unemployment rate, the Federal Reserve has continued an accommodative monetary policy, which has also boosted equities.
“The Fed’s continued program of low interest rates and quantitative easing will force investors into other asset classes. There’s a lot of potential risk on the fixed-income side given where rates are, and with future rate increases. Cash might make you feel good, but it doesn’t provide much return, so there is not much alternative to equities in this environment,” said Dunigan.
Cash or ultra-short fixed-income positions are “a good way to go poor slowly,” Brian Rehling, chief fixed-income strategist at Wells Fargo Advisors, told a gathering in New York City Tuesday.

Car makers were also in the spotlight as they reported March sales figures. Edmunds.com raised its 2013 forecast for U.S. light vehicle sales to 15.5 million, signaling optimism about the industry. 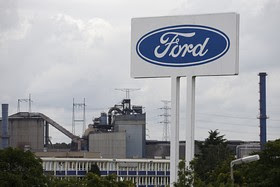 Reuters
Car makers such as Ford Motor Co. reported U.S. sales for March on Tuesday.
Shares of interdealer broker BGC Partners Inc. BGCP +48.57%  soared nearly 49% after Nasdaq OMX Group Inc. NDAQ -12.81%  agreed to acquire the firm’s electronic
Treasurys marketplace in a cash-and-stock deal valued at as much as $1.23 billion. Shares of Nasdaq OMX, however, fell almost 13%, making the stock the biggest loser in the S&P 500.

Kate Gibson is a reporter for MarketWatch, based in New York. Polya Lesova is MarketWatch's New York deputy bureau chief. Follow her on Twitter