by gcelente
Cyprus Looting is Only The Beginning for Global Elite. Alex JOnes invites Gerald Celente to discuss the looting of Cypriot bank accounts, and what the future holds for Italy, which may be the next nation to be similarly plundered.

Email ThisBlogThis!Share to TwitterShare to FacebookShare to Pinterest
Labels: The Looting of Cypriot Bank Accounts.

NYT | Today's Economist March 19, 2013: Politics of the 14th Amendment and the Debt Limit; by Bruce Bartlett

The Politics of the 14th Amendment and the Debt Limit

The reasoning behind the 14th Amendment provision that addressed Civil War debt should be applied today.

To Reassure Investors, Fed Stresses It Will Not End Stimulus

Concerns about the effects of the Federal Reserve’s stimulus policy can dilute the policy’s impact by causing investors to doubt that rates will remain low.

Edward J. DeMarco, acting director of the Federal Housing Finance Agency, has been at odds with the White House over a proposal to reduce the principal on underwater mortgages.
at March 19, 2013 No comments:

“We would legitimately expect brushfires to emerge out of Europe on occasion in 2013; the difference this year is we wouldn’t expect prolonged crisis,” said Jim Russell, senior equity strategist for U.S. Bank Wealth Management. 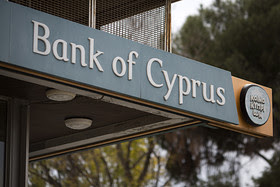 Bloomberg News/Landov Enlarge Image
A stream of reports on Cyprus’s controversial bank bailout made for choppy markets Tuesday.
On Tuesday, the Dow Jones Industrial Average fell as much as 69 points and climbed up to 62, and ended up 3.76 points at 14,455.82, with Caterpillar Inc. CAT -1.22%  pacing losses that included 14 of its 30 components.

For every two stocks rising three fell on the New York Stock Exchange, where 731 million shares traded as of 1:50 p.m. Eastern.

Reports about a controversial rescue plan in Cyprus, where banks are closed until Thursday, dominated much of the choppy trading session. Follow streaming coverage of Cyprus bank bailout.
The parliament in Cyprus rejected on Tuesday a proposed tax on bank deposits. The plan, required for by international lenders under the terms of a roughly $13 billion bailout, placed a one-time tax on depositors.

Cyprus parliament rejects tax
Cyprus's parliament Tuesday rejected a controversial bank deposit levy—a precondition for receiving a €10 billion bailout—effectively tearing up the four-day old loan deal the country had negotiated with European and international creditors that it needed to stave off default and a looming meltdown in its financial sector. Matina Stevis reports.


“This does smack of breaking some sort of emotional pact that depositors have with their banking system, if overnight they can swoop in and swipe deposits in the name of needing tax revenue. You’ve just changed the terms of the deal. And the last thing the European banking system needs is a flight of trust,” said Russell.

But simple profit-taking was also likely at play.

That gain, which had the Dow Jones Industrial Average DJIA +0.03%   rising to a record close last week, is attributed by many, including Russell, to the ongoing bond purchases by the Federal Reserve, which on Wednesday concludes a two-day policy-setting session.

“At some point the Fed is going to take its foot off the accelerator, and we may get a preview tomorrow. But we think it will be at the next meeting that comes into sharper focus,” Russell said.

The Federal Open Market Committee on Tuesday started a two-day gathering after agreeing in December to tie record-low interest rates to the labor market and inflation.

“Don’t expect the Fed to introduce any changes, they’ll keep their current programs in place, and there won’t be any indication of when they are going to start withdrawing quantitative easing,” said Gus Faucher, senior economist at PNC Financial Group.

“There’s a little concern, but the general consensus is Cyprus is not going to be a major factor for the U.S. economy going forward,” he added of a controversial proposal to tax bank deposits in Cyprus.

Ahead of the open, the Commerce Department reported builders broke ground on 917,000 homes on an annualized basis, with housing starts up 0.8% in February, slightly better than expected.

By Sara Sjolin, MarketWatch
LONDON (MarketWatch) — European stock markets dropped for a third straight day on Tuesday, as news reports said the ruling party in Cyprus would abstain from voting on a key decision on the country’s bailout conditions.


Trading was suspended on the Cyprus Stock Exchange to avoid any potential risks to the financial systems, as the country’s banks took center stage in an unprecedented deposit-tax drama related to a 10 billion euro ($13 billion) bailout agreement. See: Cyprus uncertainty rises amid new bank bill. Shares in neighboring

Investors in Europe were spooked by the Cypriot agreement, but Richard Hunter, head of equities at Hargreaves Lansdown in London, said there was no reason to flee the broader European equity market at the moment.
“Obviously this is just a small part of the global jigsaw; we also have China, the recovery in the U.S., generally good corporate results and indeed some progress in the euro zone. The positive building blocs remain in place, but we will have noise like the Cyprus news,” he said.

S&P: Brighter outlook for China property market
Despite rising property prices in China, ratings firm Standard & Poor’s upgraded its outlook on residential property in the country. Christopher Lee, managing director of S&P, tells us why things may be looking up for Chinese developers.


The parliament in Nicosia had been scheduled to vote on the bank-levy legislation some time on Tuesday, but media reports suggested it’s unclear whether a vote will take place and whether such controversial legislation can pass. Cyprus’s ruling party Disy reportedly said it would abstain from the bailout vote, while a private television station said all other parties would do the same.

Additionally, Cypriot Finance Minister Michalis Sarris offered to resign according to media reports, but it’s uncertain if President Nicos Anastasiades will accept his resignation.
The euro EURUSD -0.71%  fell below $1.29 after the reports.

At the heart of the discussions in Cyprus was the bank-deposit tax, which would force depositors to take losses for the first time during the euro-zone debt crisis. Eurogroup President Jeroen Dijsselbloem emphasized in a statement on Monday that the levy was a “one-off measure”, while repeating that small and large depositors should be treated differently.

Reuters
Bank of Cyprus in Nicosia.
The original proposal put a 9.9% tax on savings above €100,000, while all savings below that amount would be taxed at 6.75%. However, a new proposal from Cyprus reportedly suggested that deposits up to €20,000 were kept levy-free.

“There is a danger that depositors outside the Mediterranean island begin to question the attitudes of their own governments and international lenders to their own guarantees if the climate of greater optimism in the euro crisis were to turn for the worse again,” said Philip Shaw, chief economist at Investec Securities in a note.

“And of course faith in the international banking system could fall apart were the Cypriot parliament to reject the bailout and international lenders carried out their threat to allow the banks to collapse,” he added.
Read: Here’s what the markets are underestimating about Cyprus

“The political situation in Italy and the rescue package for Cyprus have increased the risk that the euro-zone debt crisis will worsen again. This may have contributed to the fact that the indicator has not increased substantially this month,” the ZEW institute said in a statement.

Rio Tinto PLC UK:RIO -5.19%   RIO -5.30%   AU:RIO -1.49%  gave up 5.2% as Greg Lilleyman, president of the firm’s Pilbara iron-ore operations said he sees downward pressure on iron ore prices in the second half of the year. Additionally, Goldman Sachs cut the miner to sell from neutral.

Outside the major indexes, shares of Metro AG DE:MEO +3.11%  rose 5.4%, after UBS lifted the German retailer to buy from neutral.