NORTH Korea has announced it has entered a "state of war'' with South Korea and will deal with every inter-Korean issue accordingly.

"As of now, inter-Korea relations enter a state of war and all matters between the two Koreas will be handled according to wartime protocol," the North said in a joint statement attributed to all government bodies and institutions.

"The long-standing situation of the Korean peninsula being neither at peace nor at war is finally over," said the statement carried by the official Korean Central News Agency (KCNA), adding that any provocation would trigger a "full-scale conflict and a nuclear war".

The two Koreas have always technically remained at war because the 1950-53 Korean War concluded with an armistice rather than a peace treaty. The email from North Korea threatening to bomb US bases.

The White House said it took the new warning seriously, but said Pyongyang's threats were following a familiar pattern.
"We've seen reports of a new and unconstructive statement from North Korea. We take these threats seriously and remain in close contact with our South Korean allies," said Caitlin Hayden, spokeswoman for the National Security Council.
While seeking to show appropriate concern at Pyongyang's latest statement, Washington also sought to place the new threat into the context of a string of rhetoric from Kim Jong-Un's regime. A close-up of the 'attack plan'. The lettering on the map reads as "Strategic Forces' US Mainland Striking Plan".
"We would also note that North Korea has a long history of bellicose rhetoric and threats and today's announcement follows that familiar pattern," Hayden said, noting that the United States was fully capable of protecting itself and its Asian allies.
CHINA, RUSSIA JOIN THE SABRE-RATTLING.
The government in Seoul also played down the latest statement.
"This is not really a new threat - just part of a series of provocative threats," the Unification Ministry said.
The North had announced earlier this month that it was ripping up the armistice and other bilateral peace pacts signed with Seoul in protest against South Korea-US joint military exercises, which returned the two nations to a state of war.
Voiding the ceasefire theoretically opened the way to a resumption of hostilities, although observers noted it was far from the first time that North Korea had announced the demise of the armistice.
The armistice was approved by the UN General Assembly, and both the United Nations and South Korea have repudiated the North's unilateral withdrawal.

North Korean leader Kim Jong-Un discusses a strike plan with North Korean officers during an urgent operation meeting at the Supreme Command in an undisclosed location. Kim Jong-Un ordered preparations for strategic rocket strikes on the US mainland and military bases in the Pacific and South Korea. The lettering on the map, rear L, reads as "Strategic Forces' US Mainland Striking Plan". Picture: AFP
Australian Foreign Minister Bob Carr condemned the latest round of threats and said Australia was considering imposing more sanctions on the rogue state.
Senator Carr said in a statement that reports from the Australian Embassy in Seoul suggest there is no immediate evidence of increased military preparations by North Korea.
"Despite this, North Korea continues to pose a genuine threat to the safety of millions of people in our region," he said.
Senator Carr has welcomed calls by China and Russia for restraint by all parties, as well as commitments by the United States regarding the defence of South Korea and Japan.
Senator Carr has urged all nations to ensure existing measures are strictly enforced and said Australia is considering further "autonomous sanction" on North Korea.
Earlier, North Korean media issued two photos that appear to show plans for striking the US mainland as tens of thousands rally for it.
The pictures, released by the official Korean Central News Agency (KCNA), both showed leader Kim Jong-Un sitting at a desk in what looked like a dedicated military operations room. US B-2 stealth bomber flies over a US air base in Pyeongtaek, south of Seoul.
LOST IN TRANSLATION: IS GOOGLE CREATING KOREAN CONFUSION?
EXCELLENT PICTURES OF KIM JONG-UN.
The photos accompanied a KCNA report on an emergency meeting with top army leaders in which Kim ordered strategic rocket units to prepare for a possible strike against US mainland and Pacific bases.
One picture showed Kim amongst four uniformed officers, but the main interest lay in the background.
The left of the picture showed a map with the unambiguous title: "Strategic Forces' US Mainland Striking Plan."
Straight lines on the map -- not all of which was visible -- appeared to show the proposed flight paths of missiles striking targets in the continental United States.
KIM JONG UN: MORE BARK THAN BITE? 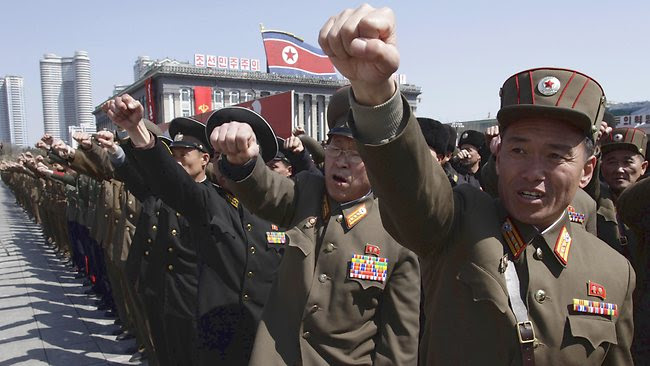 North Korean army officers punch the air as they chant slogans during a rally at Kim Il Sung Square in downtown Pyongyang, North Korea.
ROCKETS WILL SETTLE US ACCOUNTS
"I don't think this is a mistake," a South Korean defence ministry official told AFP.
"I believe it has been intentionally made public, probably in order to distort facts about the North's military power," the official said.
Most experts say North Korea, despite a successful long-range rocket launch in December, is years from developing a genuine inter-continental ballistic missile capable of striking the US mainland.
Its proven short- and medium-range missiles do not even have the range to strike US Pacific bases in Guam or Hawaii.
Further in the background of the same picture, a wall-length screen appeared to list aspects of North Korea's naval strength, with entries such as "Submarines: 40, Landing Craft: 13, Minesweepers: 6."
A second photo, showing Kim alone at his desk, also had a map in the background which appeared to show the tracked or projected movement of the US 7th Fleet in the Pacific Ocean. The pictures come as tens of thousands of North Korean soldiers and civilians held a huge rally and march in Pyongyang on Friday, in a mass display of support for a possible military strike against the United States.

The rally in Pyongyang's giant Kim Il-Sung square was attended by soldiers, veterans, workers and students, all wearing military uniforms. The North's young leader, Kim Jong-Un, was not present.
State television said the rally took place to support a decision issued by the Korean People's Army (KPA) supreme command on Tuesday - and ratified by Kim on Friday - to put the country's strategic rocket units on a war footing.

"The statement was the ultimatum of the Korean People's Army against the US imperialists," an announcer said at the start of the rally.
Under giant portraits of Kim's father Kim Jong-Il and grandfather Kim Il-Sung, the massed ranks of civilians and soldiers pledged their allegiance to the current leadership.

"Let's become guns and bombs for our respected leader Kim Jong-Un!," they chanted, pumping their fists in unison.
The rally was addressed by military and party officials who urged North Korean troops to launch a "merciless strike" on the US mainland and US military bases in the Pacific and South Korea.
"We are all ready to wipe them out for our final victory," army officer Kwon Yong-Chol said.
US Defence Secretary Chuck Hagel said Washington would not be cowed by Pyongyang's bellicose threats and stood ready to respond to "any eventuality".
His comments came as nuclear-capable US B-2 stealth bombers were deployed in ongoing US joint military drills with South Korea.
The B-2 flights, which followed training runs by B-52 bombers, were part of annual drills which North Korea each year denounces as rehearsals for war.
Meanwhile, China, North Korea's sole major ally and biggest trading partner, appealed for calm and said "joint efforts" were needed from all parties to prevent the situation deteriorating further.
Russia urged all sides involved in the standoff to refrain from muscle-flexing, with Foreign Minister Sergei Lavrov warning that the flare-up could spiral.
"We can simply see the situation getting out of control, it would spiral down into a vicious circle," he told reporters at a news conference.
"We believe it is necessary for all not to build up military muscle and not to use the current situation as an excuse to solve certain geopolitical tasks in the region through military means," he said, calling on all sides to create conditions for the resumption of talks.

Guest Workers Are at Crux of Groups' Deal on Immigration. By Ashley Parker and Steven Greenhouse: NYT | Today's Headlines, 30 March 2013.

From The Desk Of Fernando Guzmán Cavero

Dear Friends:  I would like to express hereby my apologies for couldn't fulfill to be with you with my "Daily Financial News Blog&...